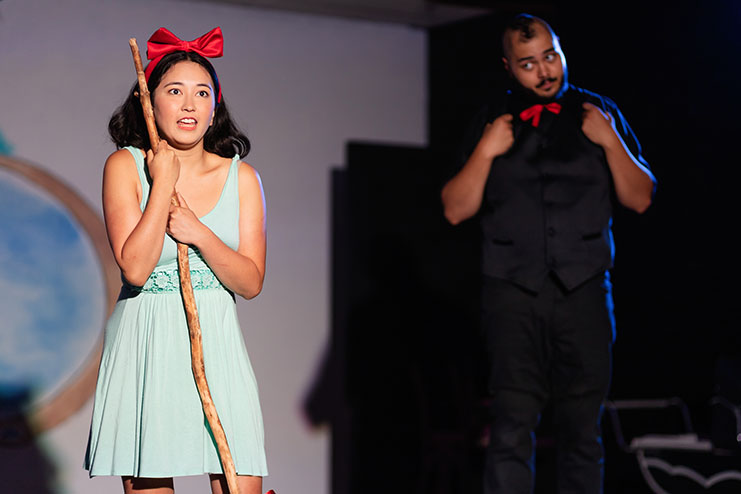 Fans of animator Hayao Miyazaki have enjoyed his imagining of Eiko Kadono’s 1985 novel Kiki’s Delivery Service, and now Puget Sound audiences have the opportunity to see a staged version of the same story of a 13-year old witch who flies away from home on her broomstick in order to start a business in a new place. Theatre Battery in Kent presents the first U.S. production of Jessica Sian’s dramatic adaptation of this inspiring story.

Director Kathryn Stewart finds Kiki’s story to be empowering. “I think there’s something to be said, at this moment in history, about telling the story of a young girl who is a stranger in a new city and must find the strength within herself to overcome the many odds and connect with people,” Stewart said. “In this play, you watch Kiki trying to both find herself and find acceptance.”

Theatre Battery’s producing artistic director, Logan Ellis, views Kiki’s Delivery Service as being reflective of the theatre company’s mission to “create socially testing and unapologetic work that ignites the community,” and he especially finds the title character inspiring. “Kiki is a promising, energetic, and complex young leader whom we get to watch being celebrated,” he said. “Her story is one in which trust is built, fears are overcome, and a community ultimately rallies behind an outsider and her traditions.”

Ellis asserts that building community is important for Theatre Battery in its found location in Kent. “Theatre Battery has operated for the last four seasons on a ticketing policy called Radical Hospitality, which means that we offer our material free of charge for every audience member,” he said. “Kent has a substantial and quickly growing population of immigrant families especially, and we were struck by the themes present in this terrific adaptation of the classic Japanese novel: themes of being a young hopeful outsider in a new city, what it means to put service over self, and what it takes to establish a new identity in a place that initially rejects you.”

Acceptance and inclusion are seen by this theatre company to be key foundations for building community. “Theatre Battery’s last several seasons of work have centered politics and appealed especially to those reckoning with topics of social justice in Kent,” Ellis said. “We told a story about an immigrant family’s struggle with the realities of deportation, we produced a musical about Pussy Riot and the relationship between Vladimir Putin and Russia, and we created an interactive work confronting our community about unprovoked violence against African-American men. Kiki’s Delivery Service is approaching our mission from another angle.”

Stewart has assembled a cast of actors who are enthusiastic about Kiki’s story. Aimee Chou plays the role of Kiki’s mother, Kokiri, and finds this a rare opportunity to portray a specifically Asian role. “Unlike the movie version of this character, Kokiri is initially much less supportive of Kiki’s capricious decision to leave home for her one-year journey,” Chou said. “I’m Deaf, so in a manner of code-switching, we’ve woven some American Sign Language (ASL) into the mother-daughter dialogue.”

Likewise, Malex Reed, who plays Jiji the cat, appreciates the duality of Jiji’s relationship with Kiki, as both friend and mentor. “He has to navigate being a guide and a companion while still giving Kiki the room to make and learn from her own mistakes,” Reed said. “I was particularly interested in working on this piece because it’s a story about a young person coming into themselves and learning to distinguish confidence in oneself and hubris.”

Another of Kiki’s new friends is Tombo, a 13-year old played by Michael Cercado. “The most important thing I’ve learned about doing this production is reinforcing a lot of the same values that Kiki learns throughout the play,” Cercado said. “Lessons like trying your best, never giving up, asking for help, and helping the community out in any way you can are lessons dear to my heart.”

Cercado is particularly pleased that Theatre Battery took up this production. “Kent is my hometown and they have presented some great, thought-provoking works over the years,” he said. “Also, this is their first kid’s show and it’s my first kid’s show too, and I wanted to invite the little kids in my family who have never seen me perform yet.”

These sentiments echo those of Ellis and the Theatre Battery leadership. “Kiki’s Delivery Service is an experiment for Theatre Battery,” Ellis said. “It’s a chance for us to see what kind of youth audience we might uncover in the quickly growing populations of South King County.”

This growth is arising due to immigration and the economic challenges facing the region. “Kent is an exceptionally integrated city in terms of culture, age, race, political ideology, and nations of origin,” Ellis said. “I hope that a play like this can ignite passion for new community outreach and connections, while also reminding us how important it is to share space and celebrate one another for our different values, talents and perspectives.”

As a role model in sharing space, Theatre Battery is staging this piece in the unconventional space of Kent Station. “The biggest challenge we faced when embarking on this project was how to make Kiki fly on her broom!” Stewart said. “The actors have no masking on the sides of the stage. The audience sees us make every piece of magic, but that magic can still can take your breath away, or make you laugh, or bring tears to your eyes.”

As director, Stewart finds fulfillment in seeing the audience reception of the finished performance. “When I watch the little girls in the audience cheering Kiki on, they will have spent 90 minutes watching a young girl express herself loudly, trying, failing, and then trying again harder,” Stewart said. “That’s the real magic in the story.”