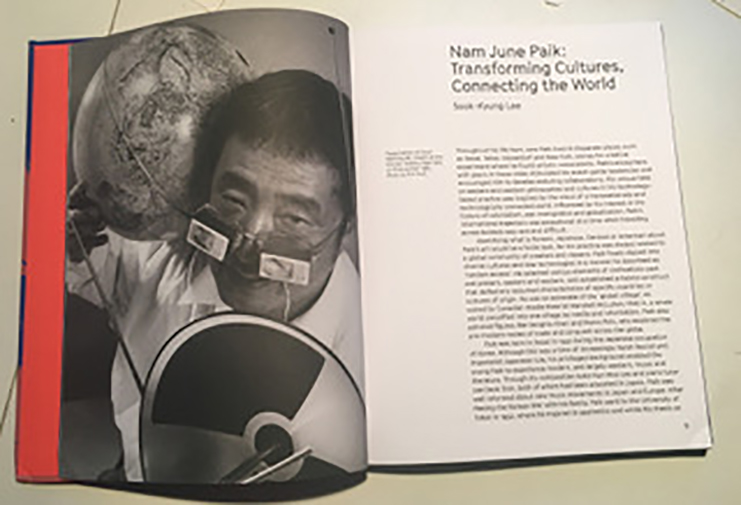 Nam June Paik is a beautifully produced catalog of the exhibition of the same name that was organized by the Tate Modern, London, and the San Francisco Museum of Modern Art, in collaboration with the Stedelijk Museum in Amsterdam, the Museum of Contemporary Art, Chicago, and the National Gallery, Singapore. The exhibition, organized in a more positive time than the current COVID-19 pandemic has engendered, was shown at the Tate Modern from October 2019 to February 2020. It was scheduled to travel to the other museums throughout 2020 -2022, but its schedule is not as certain as the catalog suggests.

Nam June Paik, a Korean-American artist, is considered to the be the “Grandfather of video art.” He was active throughout Japan, Germany and the United States from the late 1950s until his death in 2006. During that time, he showed in Seattle several times, at an artist-run organization called and/or , where I ran the video art programming in the late 1970s, and at an exhibition of several TV robots sponsored by Center on Contemporary Art (CoCA) in the atrium of  a small commercial “mall” in Capitol Hill on Broadway in the 1990s. I was lucky to have been involved in organizing his visits to and/or and CoCA and, due to my early work as an artist working in video art, I have been a follower of his work since the early 1970s.

Paik was a wonderful, kind, prolific and yet approachable artist whose work influenced contemporary art beyond the video art field into contemporary music, performance and other visual art. His work was generous, inclusive, humorous and mind-and-category bending. He was married to artist Shigeko Kubota, an important video artist in her own right who visited and showed her work in Seattle at and/or as well.  In the 1970s when video art was still so unknown and unsung within the art world, the community was much smaller, and I was able to have some personal encounters with him and Shigeko over several years, even staying in their loft in New York a couple times. They were central to the development of video art.

Paik traveled quite a lot, from Korea to Japan to Germany and the U.S., and this led him to question borders and to have an expansive view of culture and worldly connections. He was a relentless experimenter and innovator, and his work also did not respect artistic borders and strict discipline boxes. With this attitude, he predicted the internet age and the global connectedness of art and culture. He explored genres and mixed them up, he collaborated with other artists and scientists and engineers, he mixed in his Buddhist and Asian beliefs with technology, sculpture and drawings. Rock and roll mixed with electronically manipulated images when those special effects were rare. High and low culture, the popular with the innovative or obscure, Buddha contemplating television, television sets as “robots” were all part of his vocabulary. Television sets became interspersed with plants to become a garden, cathode ray tubes were manipulated with magnets to change how they showed images (or not), pianos became sculptures and altered so the music from them barely recognizable or even irrelevant. His own body was a performance tool, sometimes alone, sometimes in collaboration with other performers such as John Cage, Joseph Beuys and Charlotte Moorman.

This largest exhibition to date of Paik’s work traces his development as an artist over five decades; thus this catalog is a very comprehensive view of his work filled with many images. After a biographical essay by Sook-Kyung Lee and a general overview of his work by Rudolf Freiling, the two curators/editors, the catalog is organized by topic rather than chronologically or by media as some catalogs, as his work is not easily put into traditional categories. Each “topic” has essays, accompanied by ample photographs of the exhibited work. Essays vary from thoughts about a single work to more comprehensive looks at larger bodies of work or collaborations. Individual artworks are given contexts, placed with other related works showing how the whole of Paik’s work evolved, circled back, was re-imagined and grew.

The first section, “Post-Music: From Music to Performance”, chronicles his beginnings as a musician to his lifelong interest in performance, not just with music, but also with video or a combination of both. One sees how he often thought of himself as a musician, with considerations of time as the basis, not necessarily the sound. Even with his images, he “composed” rather than constructed. The next section is focused on his moving from music to including television and video.  Titled “Random Access: TV Manipulations”, it delves into his combining of experimental music and television and goes further into his experimentation with video. He used pianos as sculptural material, and one can see how they allowed his inclusion of TV sets as elements for his sculpture while manipulating/changing the images they showed.

The 3rd section, “Variations: Collaboration as Method” focuses on his collaboration with Charlotte Moorman, a cellist known particularly for her performances with Paik’s “TV Bra for Living Sculpture”, TV Cello and other performances with Paik. It shows how much their creative spirit aligned and made possible the breadth of their work together. This section also talks about his other creative collaborations, with dancer Merce Cunningham, German artist Joseph Beuys, Fluxus, Shuya Abe, an engineer who built Paik a video synthesizer, and with the technology itself. We see his interest in robots and other technology was born in the 60s, early enough for him to take advantage of the burgeoning availability of video for “regular” folks. In fact, he was the first artist to purchase a “portapak”, Sony’s first portable video recording/camera unit. On his way back to his studio, he was caught in a traffic jam as the Pope was visiting. He videotaped the traffic and showed it that night at the Village Vanguard, a club. It is generally known as the first video art show.

The 4th section examines his involvement with the global context. Titled “Global Groove: Transnational Trajectory and Transcultural Contexts”, it is named after one of his seminal video experiments at WGBH in Boston, “Global Groove” in the early 70s.  He was genuinely interested in the global interconnection, and in the early 1980s, put together a couple live satellite broadcasts which connected people around the world, from the US to Europe, Great Britain, and Asia. In 1984, “Good Morning, Mr. Orwell” included live events from New York and Paris and was seen in Korea, the Netherlands and West Germany.  It included musicians John Cage, Laurie Anderson, Allen Ginsburg, the avant garde poet, Charlotte Moorman, with some Philip Glass compositions over computer animations. Even technical glitches became wonderful additions to the event for Paik, and its close brush with chaos created the cultural glue he wanted. This would be the first of 3 such experiments he did in a time when such events were hardly dreamed of.

Even though best known as a video art pioneer, his work goes beyond that. The catalog is a vibrant portrait of an artist whose oeuvre is not just contemporary to his life but foreshadows what “contemporary” might mean even in the years after his death. He gave permission to other artists to look beyond, to explore new media, to play. His multi-media, inter-media, intra-media and maxi media practice was unique. His legacy in the artworld is deep and indelible. In this moment where culture and technology are so much in discussion, this intercultural artist show us a way all these things might be intertwined to illuminate the path, looking forward, looking backward.