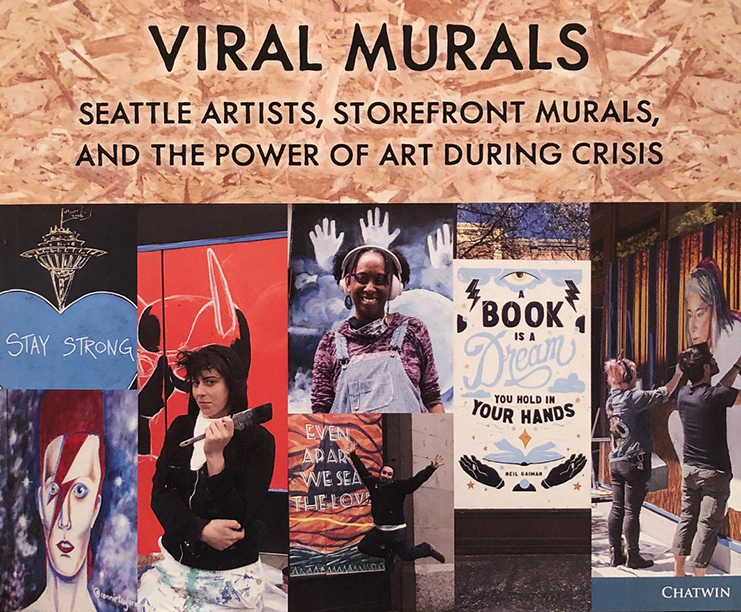 During the current COVID-19 pandemic, countless bars, restaurants and retail businesses were required to close their doors. To protect their storefronts, many businesses covered their glass windows with wooden boards, which became prime canvasses for artists to create public murals all across Seattle.

Chatwin Books, a local publisher, decided to capture and document all of this public art, in anticipation of a day when stores would reopen and the murals would come down. Their book, Viral Murals: Seattle Artists, Storefront Murals, and the Power of Art During Crisis, is a 250-page full-color collection featuring 165 murals by 75 artists.

The book is the brainchild of Chatwin Books co-founder Annie Brulé, who is also an artist. “The mural art has brought life into our city in a way I’ve never seen before,” Brulé said. “It’s transformed a really rough gritty situation in so many neighborhoods into places where people are delighted to walk again, and not only that but they slow down and look closely and snap photos and share them, just because of the beauty.”

For many of the artists, their journey from mural artist to inclusion in this anthology started with a Facebook post by Kathleen Warren of Overall Creative. Patrick Nguyen and the team of artists at Dozfy LLC saw the post and were happy to share the 65 murals they had made, each of which reflects a story related to the business whose windows it covered, as well as the COVID-19 pandemic in general.

The same was true for artist Shogo Ota, who teamed up with Shota Nakajima to create several murals in Seattle. “I’ve done the restaurant branding for TAKU in Capitol Hill and Shota Nakajima is the awesome Japanese chef that I’ve been working with on many projects,” Ota said. “Shota and I are both Japanese, so we wanted to share our culture with a positive message to the community.”

For others, such as Jillian Chong, the path toward documentation took another route. “A lovely woman named Catherine Anstett was a photographer that was very interested in taking pictures of the process, meeting the artists and documenting the murals,” Chong said. “She friended me on Facebook and then sent me the link to apply. Thank you, Catherine!”

Chong reports that her murals have all pursued one purpose: to make people smile. “There are many animals doing human things, and there are messages about the Black Lives Matter movement and encouraging people to vote,” she said. “My goal is to spread happiness, encourage, and inspire.”

Nguyen describes the creation of a mural as being multi-layered. “The process of working a mural is finding the emotional message while maintaining empathy for the people involved in these tragic times,” he said. “It’s such an honor to transform their goals into a visual artwork.”

For Ota, advance preparation was key. “I made stencil pieces and Samurai cutouts in my studio so I could get it done smoothly,” he said. “Those wood boards didn’t like the acrylic paints so it was a little bit hard to draw with brushes.”

Chong likewise sketched out her ideas in advance. “I always had a rough draft of a drawing, but it came together step by step, piece by piece,” she said. “These were the first paint murals I have done, and I learned a lot about the preparation, the supplies, and the coordination with the business owners.”

For Nguyen, these murals are history in the making. “The importance of the storefront murals is that it is a snapshot of how people are feeling and thinking during the Covid-19 quarantine,” he said. “The boards have become platforms where people can express and reflect on their current situation.”

Chong believes that street murals have an immediate positive effect. “The storefront murals have the power to uplift, inspire and encourage people with a glance in these troubling times,” she said. “Instead of seeing boarded up, post-apocalyptic storefronts they are greeted with color, design, and art which can add happiness to their day, if only for a second or two.”

Ota agrees. “I think it looks much happier compared to naked boards on windows,” he said. “It’s very important and necessary that people can feel the power of art, community, and sharing good vibes.”

Both Chong and Ota also see an extra benefit to street art, in preventing graffiti and vandalism on closed storefronts. “I’m hoping these artworks protect the buildings and business owners,” Ota said.

As both a publisher and artist, Brulé wants the Viral Murals book project to help capture one positive side of this challenging pandemic. “My greatest hope is that each artist will be proud to hold the book,” she said, “and know they’re being celebrated for their awesome contribution to the life of Seattle.”