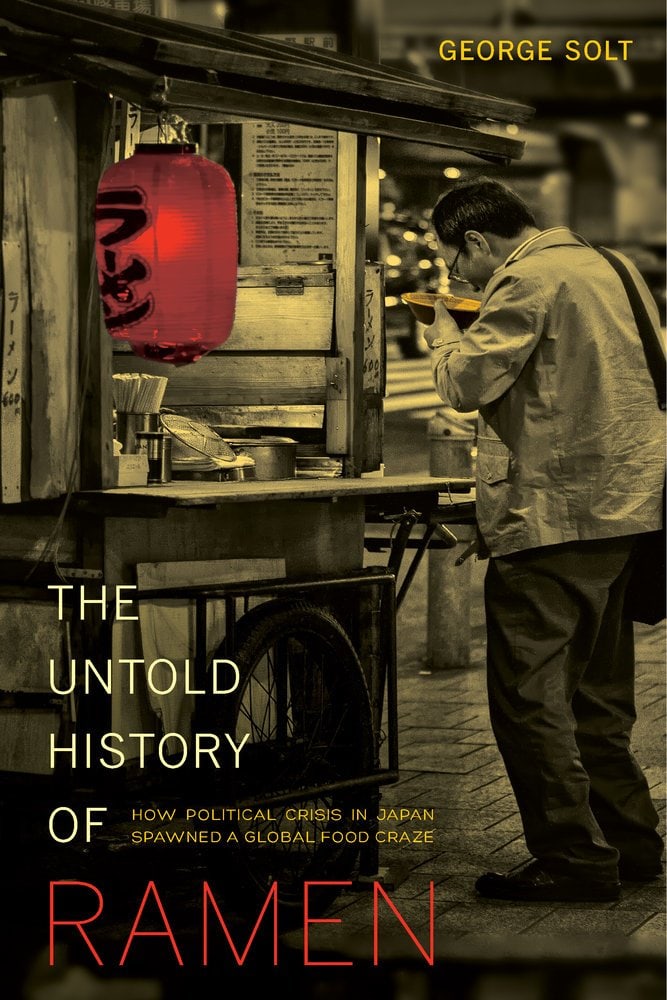 For those who need a main-course-sized book on the history of ramen, look no further than George Solt’s The Untold History of Ramen. The book, published just this year, takes a look at politics and the intersection of this much beloved noodle dish. Solt does a fine job of briskly moving along history from the roughly 1920s onward while providing enough detail to sink your teeth into. A smattering of entertaining and flavorful passages also keep the reader engaged such as this one found before the introduction:

I was a mere toddler during the Regan era but as an adult I remember reading that the Federal School Lunch and Child Nutrition Program budgets decreased during this time. The USDA Food and Nutrition Services had the difficult task of finding a way to deal with the lack of funding and responded by attempting to “count” more food items as vegetables. At the time, a proposal was created to make pickled relish a vegetable. While I was too young to celebrate in the streets along with the millions of young children in the United States, I can say that I would have gladly eaten a cup of relish over a serving size of broccoli.

What this moment in American history did say about our character was our need for someone else to categorize what was healthy. This trend continues today as the schools struggle financially to adopt a 2010 Congress ruling to lower sugar, salt, and fat in lunches. First Lady Michelle Obama commented to CNN in May about the more recent discussion on whether pizza sauce could count as a vegetable:

“You don’t have to be a nutritionist to know that this doesn’t make much sense. Yet, we’re seeing the same thing happening again with these new efforts to lower nutrition standards in our schools. Our children deserve so much better than this.”

Obama points out that we don’t need to be nutritionists to understand basic principles of a balanced diet, yet the public does lean on regulated agencies to specify what is and is not a vegetable. These statements characterize our uncertainty and anxiety when it comes to health and food. The Untold History of Ramen, does not dissect American food culture and stays focused on Japan. But it does provide a framework for which we could examine ourselves.

The book begins with a trio of narratives, each describing the origin of ramen like a noodle breaking into three strands. Each story is unique but connects through the influences that the Chinese had on cooking and food preparation. The most unique story dates to the 1660s in which Tokugawa Mitsukuni, a feudal lord, was the first person to eat ramen in Japan by way of advice from a Chinese refugee, Zhu Shun Shui one of his trusted advisors. The version Zhu recommends to Mitsukuni had ginger, green onions, garlic chives, garlic, and rakkyo, a type of root. In each of these stories, Chinese immigrants participated in fueling the explosion of ramen, which was then called Shina Soba or Chinese Soba.

By the 1920’s Shina Soba became a popular and regular part of culture as it was easily found in street stalls and commonly eaten on the way to or from a destination. This method of eating easily melded with leisure activities and the daily work commute. The practice of eating on the go was widely accepted but primarily for the working class and students. The ramen stall was both convenient and inexpensive.

We can thank these early Japanese ramen stalls for our modern day food trucks that fill the same need for a quick meal while on the way to or from a destination. Particular cities have devoted city blocks to the food truck establishments, such as the Rose City Food Park in Portland Oregon and the Queen Elizabeth Food Truck Pod in Vancouver Canada. No matter which country, the history of the roving meal has been part of our culture for decades.

The history of ramen wasn’t always a clear and tasty one as Solt illustrates the murkier side of ramen’s history once the war becomes a reality. In war, food staples and supplies tend to become scarce, and Japan was no exception. Due to the need for rationing, ramen sales were halted, creating an abrupt change to this easily attained meal that was a fond welcome to the working class. The ramen industry took a hit as ramen stall operators were forced to shut down and some were arrested. The United States stopped exporting wheat to Japan and then black market soba stalls began appearing. Although wheat had a high nutritional value, it was prohibited to buy or sell soba in Japan. Hunger became pervasive.

Japan’s relationship with the United States had changed after the war and thus wheat exports began to flow again, and was even discounted, which allowed more ramen to be eaten. A decline in the demand for rice, sweet potatoes, and beans encouraged a growth in ramen popularity around mid ’50s to early ’70s. From this point onward, the introduction of American food became more popular and the taste for breads and cakes became widely accepted. Ramen became a symbol again for the working man’s ability to have an inexpensive meal and also escape from the industrialized and large scale surroundings that Japan was feeling at the time.

Ramen got a bit of a branding facelift by the 1960s. The association with ramen began to take on a much more domestic image. While food stalls remained in the busy streets—the middle class housewife began to find ways to simplify domestic chores such as cooking. Ramen quickly became part of a middle class meal made for the family and the status barrier that separated the two crumbled. The ability to make instant ramen at home awarded that household with additional leisure time, a growing phenomenon during this period. By the 1970s, the first Cup O Noodles would make its way to the United States.

The Untold History of Ramen shows that we can tell a lot about our culture by the way that ramen was eaten, sold, and made. George Solt gives the reader a flavorful look into this elusive yet well-known cuisine that has shaped history.