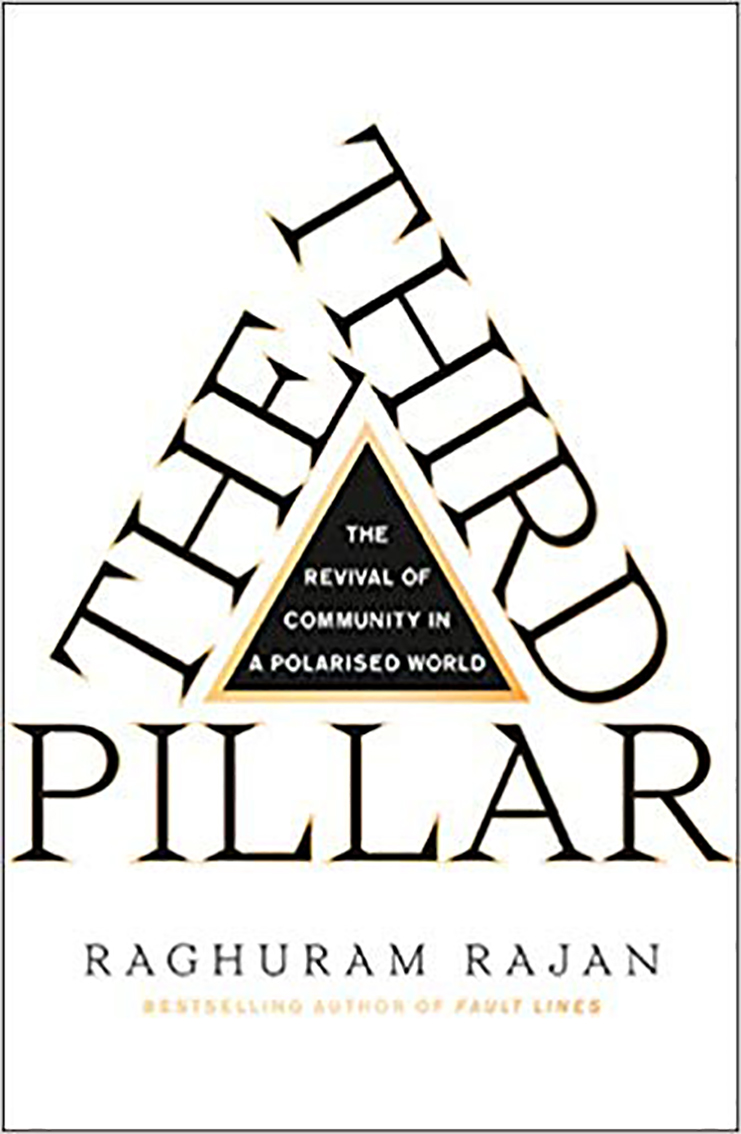 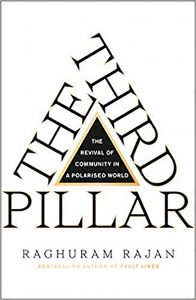 The Third Pillar: How Markets and the State Leave the Community Behind is three-part look at how modern nations and markets developed at the expense of community control and solidarity.

Authored by Raghuram Rajan, currently a professor at the University of Chicago who grew up in India and headed the Reserve Bank of India from 2013-2016, The Third Pillar argues that national governments in many countries have grown so large that they have increasingly allocated resources and created policies without local input. As such, many communities are not involved in creating solutions for their own problems which loosens community bonds and leaves individuals feeling like they do not control their own destinies.

At the same time that national governments have usurped power from many local communities, Rajan discusses how the forces of technological change and globalization have destroyed or diminished traditional industries that many localities formerly relied upon.

The book concludes with solutions about how to reinvigorate communities so they can rebalance themselves as a strong, necessary co-equal force alongside national governments and the private sector. Rajan emphasizes the necessity of all three “pillars” in a vibrant, healthy society.

Beyond the fact the author is an influential Indian academic and policymaker, the book is broadly relevant to Seattle’s API community because its general analysis and policy prescriptions are highly pertinent to current discussions and struggles over affordable housing and the maintenance of deeply-rooted communities in the Chinatown-International District and other parts of Seattle. Rajan discusses the importance of rezoning in U.S. cities to accommodate higher density, especially around public transportation stops. This would significantly lower the price of dwellings and make it less likely that the economic, residential and transportation development of a neighborhood results in the disappearance of lower-income residents due to rising rents.

Equally relevant to communities undergoing demographic changes in Seattle, Rajan discusses how over the last few decades Americans have increasingly segregated themselves by income level. A major reason Rajan gives for this trend is that highly educated, well-paid professionals are extremely focused giving their children the best possible schooling and have the economic tools to do so. Rajan emphasizes that the economic advantage of having a strong education has never been higher in the United States. Consequently, not providing the best possible education can limit one’s career outlook and earning potential significantly.

As such, many with the means have bought homes in neighborhoods that have strong-performing schools, which Rajan calls “residential sorting.” This creates a cycle where students that are already well-prepared to excel in school are exposed to other students similarly well-prepared. He references a study that shows that students from homes of well-educated parents “hear more spoken words — about 2,100 per hour — compared to 1,200 per hour in working-class families and 600 per hour in families on welfare. This means the child in a professional family hears millions more words every year than a child in a family on welfare, which naturally boosts both the child’s vocabulary and its ability to speak relative to its peers.”

According to Rajan and the research he cites, due to “residential sorting,” students in lower-income schools are thus not exposed to these well-prepared students and their superior vocabularies and study habits. However, some schools do have mixed-income student populations and Rajan cities research showing that lower-income students do far-better when they attend school with students from professional households.

As remedy for this sorting, Rajan proposes possible tax incentives for high-earning professionals that stay in lower-income neighborhoods. This creates a situation where higher-earners would opt in to mixed-income neighborhoods rather than have it forced upon them from above (like school integration through busing, a hot-issue in Seattle’s recent history). It also avoids a situation where only a few lower-income students are selected for high-performing private or charter while the majority remain segregated in lower-performing schools. Keeping schools mixed in terms of ability would, without a doubt, equalize the playing field for many from impoverished homes.

Rajan points out that people naturally feel a stronger responsibility to their families than their communities. His goal is to propose a way that people can value and maintain family and community both while lessening sorting.

For the Seattle API-reader, however, parts of Rajan’s book are unfortunately European-centric. Much of part one of the book, which covers the emergence of strong, centralized modern governments, is focused on western Europe and pre-21st century U.S. examples exclusively. Part two does devote a 40-plus chapter entitled, “The Other Half of the World”, which encompasses largely China and India, the recent developments of their governments and businesses, and comparisons between the two. This, however, is the extent of any lengthy focus on Asia. Part three gives broad solutions to problems outlined in parts one and two, many of which are relevant to a Seattle API audience, as discussed above.

While Rajan’s book is at points Euro-centric, Rajan does an excellent of breaking up the book into discrete chapters and subchapters, which means someone can easily find sections of interest without having to read the entire book. Additionally, given Rajan’s Indian background, there are interesting anecdotes about India throughout the book to support some of his points. For example, in Rajan’s discussion of affirmative action, he cites his working for the Indian government that allowed him to meet families positively affected by Indian affirmative action for lower-caste and lower-income people.

While parts of the book give strong details to support his ideas, it can be somewhat broad and theoretical at times. I found myself writing into the margins numerous times “give a real-world example!” It covers an immense amount and with more detail it could easily be twice its length of almost 400 pages which would hurt its readability.

For the reader more interested in specific topics, checking Rajan’s citations and reading some of his sources would be a way to fill in the details. For any community organizer, activist, politician, and interested citizen who desires a positive way forward for communities, Rajan’s book is a great place to start.