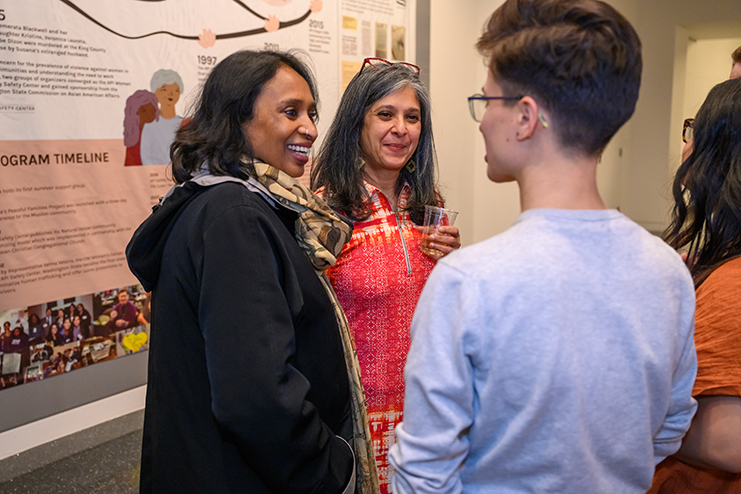 The space is vast and almost unrecognizable between an answering machine, over two decades ago, locked privately in a small closet taking messages from desperate women, whose own communities and families shunned their pleas, and present day API Chaya serving thousands of people more openly in the community and against less resistance. It is vast but yet, the space and its familiarity remains.

When the Asian Art Museum offered API Chaya space to hold an exhibit honoring our work in its re-opened and re-imagined halls, it was a chance to be seen and to help narrow that cavernous space.

I remember those days in the beginning; they were grueling. Just four of us, working more than full time and then in our “off hours” translating for women, accompanying them to court and doing their medical exams. But we knew that the space between the women who needed us and the justice they deserved was far, far too large. And someone needed to fill it. I remember saying with my handful of co-founders that our mission would be to not exist in the future. That our mission would ironically be to extinguish the need for our hard work today.

Yet, here we are.

Yes, we are speaking more openly about gender violence in Asian and Pacific Islander communities, and the MeToo Movement has brought even more to light.

Yes, we are not pushed away by our own communities as brusquely or accused of “causing” the problem by talking about it and trying to confront it.

But there is still space.

Because the violence not only still exists. It is still perpetuated and sustained.

And until that changes, our mission will not be achieved.

Until that day, this exhibit allows us the opportunity to give gratitude to all the women whose stories have filled this space. They, and they alone, are the warriors. They have done the hardest work that no one asked them to take on. The work of being human and knowing somewhere deep in the recesses of their souls that other humans needed to know their stories. They took the risk that their stories may never be seen or even believed. Yet, they filled the space anyway.

For the women we speak of are the warriors; they are the women who have paved the way for those who walk and fight after them.

And the space between what you think of them and who they really are is one that deserves filling in.

Know that as you move through The Space Between, you stand in sacred land. Because you will be standing in the space created BY them, FOR them, by our own communities. Take note; open your mind and heart to a narrative that defies the one you were given. These women deserve that.

The Space Between is OURS to fill.

The Space Between is OURS to recreate.

Because there are times when space is needed and times when it needs to be filled with the stories of only those who can complete them.

We offer gratitude to the women whose stories were sacrificed in the space before us for they are the stories that now hold us. They are the only stories that will move us to greater understanding and triumph.

May The Space Between all of us be filled with truth to light the way.

API Chaya’s exhibit, The Space Between, celebrating 25 years of supporting survivors and creating change, will be at the Seattle Asian Art Museum until the end of March. The exhibit was curated by Derek Dizon and designed by Sudeshna Sathe in partnership with Tanmeet Sethi, Donna Lewen, Mimi Castillo, Janet Gwilym, Alana Gwilym Tso, and Roger Rigor.

API Chaya serves survivors of all genders. We recognize that domestic violence and sexual violence victimization rates are highest for women, transgender people, and gender-nonconforming people.