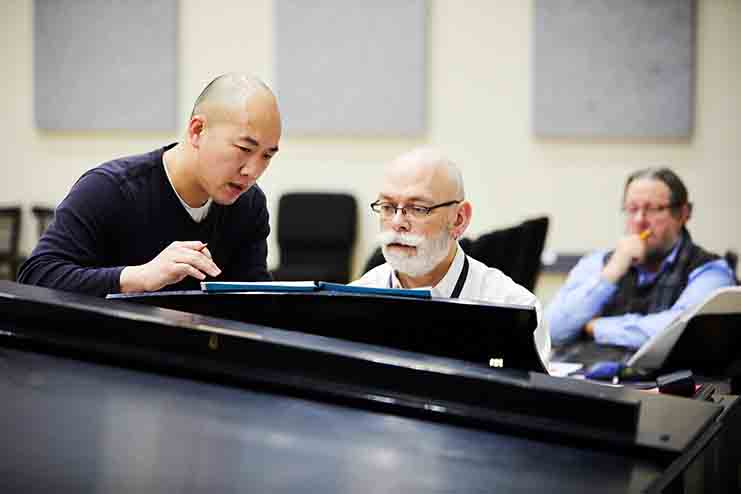 Conductor and pianist Kelly Kuo hails from Oregon and currently serves as Artistic Director of the Oregon Mozart Players, and now, he comes farther north to conduct Charlie Parker’s Yardbird for Seattle Opera.

This new opera, with music by Daniel Schnyder and libretto by Bridgette A. Wimberly, revisits composer Charlie Parker’s dream of bringing classical and jazz together – and Kuo finds this combination exciting. “Even more than working on a piece focused on real people,” Kuo said, “I love working on a piece written by a living composer!”

Kuo reports being surrounded by music since early childhood. “The story goes that my parents saw me pound on a plastic toy piano at a department store and decided then to invest in an upright piano for our home,” Kuo said. “Though neither of my parents were musicians, they had classical music playing in the house for as long as I can remember.”

The Oregon community of his youth was also very supportive. “There were very few full-time performing musicians,” he said, “but many people made music an important part of their lives as teachers, supportive families, and volunteers, helping to develop generations of people who would learn first-hand how music teaches one about life and how to be a better human being.”

Kuo attended graduate school at the Manhattan School of Music in New York, but returned to the west coast to practice his profession. “Though the Pacific Northwest may not have a plethora of big cities and their accompanying musical culture, the residents more than make up for it with their persistence, creativity, and hard work!” he said.

Kuo’s interest in conducting grew only late and gradually. “When I started playing for singers in New York to earn extra money during graduate studies, voice teachers asked me if I had ever thought about doing more of it,” he said. “Soon thereafter, I received an invitation to join the Houston Grand Opera Studio where my training as a pianist and coach included a language class and a couple of conducting lessons with Larry Rachleff at Rice University so that I could conduct backstage chorus and bands as needed.”

With this training, he began to work at the now defunct Opera Pacific as an assistant conductor and pianist. “I started ‘flapping’ in piano rehearsals for a couple dozen operas before making my conducting debut leading the second cast of a production of La Traviata,” Kuo said. “It was literally a trial by fire, as before my one and only rehearsal before the performance, I had only previously stood in front of an orchestra of any kind for a total of 45 minutes my entire life!”

But Kuo soon found that his multi-faceted skills could be a double-edged sword. “I have found that, in general, the business prefers to pigeonhole artists,” he said. “When trying to find work as a conductor after having previously had success as a pianist, coach, and administrator, I had to essentially hide my past experience in these areas in order to be considered for conducting opportunities.”

Perseverance was key for Kuo. “It took around seven years of doing this before I started being able to work full-time as a conductor,” he said. “At the same time, I continued to take on fulfilling projects ‘under the table’ as a pianist to keep myself honest as a musician and not allow my technique to disappear. I refuse to believe that one cannot do multiple things at a high level.”

For Kuo, opera fits that exact bill. “For me, opera is actually chamber music at the highest level,” he said. “The more one knows how everyone else’s part goes, the better able one is able to react and adjust to what has to be a flexible dialogue between hundreds of moving parts on and offstage.”

Conducting singers as well as musicians is especially satisfying for Kuo. “There is nothing that can reach one’s soul like the sound of a human voice singing,” he said. “This is why instrumentalists are constantly striving to ‘sing’ when they play.”

And Kuo is also eager to become more familiar with Seattle during his stay. “Seattle Opera plans to have me visit a couple of community programs while I am in town to work with the youth participating in their ensembles,” he said. “I’m looking forward to seeing what these young musicians are creating!”