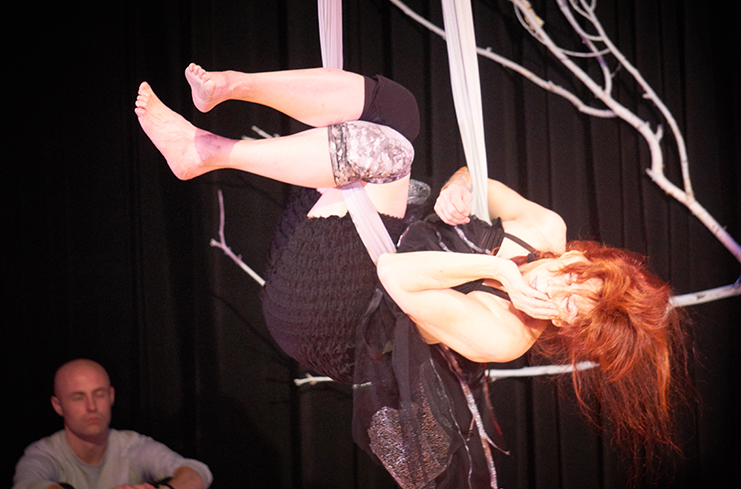 DAIPANbutoh Collective, a local collective of artists interested in the 20th-century post-war form of Japanese dance called butoh, is now in its tenth year here in Seattle, and will soon be presenting its annual Seattle International Butoh Festival.

In contrast to past festivals, this year’s festival will focus exclusively on local practitioners. “The butoh scene has continued to grow with local artists presenting their own work, collaborating with each other and teaching workshops,” said Joan Laage, Daipan’s production manager. “Daipan decided to celebrate this year with having each month a different local teacher in our Monday night weekly training series and all of these teachers have been invited to present their own work in the festival.”

Daipan’s artistic and programs director, Sheri Brown, says the focus is on the collective’s decade-long history. “It’s a milestone in DAIPANbutoh Collective’s evolution, celebrating a decade of continued development of butoh as well as nine previous annual festivals,” Brown said.

One of the local artists who will perform in the festival is Aoi Lee. “I was attracted to the method and charisma of Tatsumi Hijikata, the founder of Butoh,” Lee said. “ Hijikata states that ‘butoh is a flesh that stands dead,’ and after years of practicing butoh, I learned how to connect my body and soul to this notation.”

Lee plans to share the legacy of this inspiration in the current festival. “Last year, I studied under Moe Yamamoto, one of the butoh masters who studied under Hijiktata,” she said. “Hijikata dedicated a series titled Costume En Face to Moe, and Moe shared with me the choreography for one of its pieces called Goldfish.”

But Lee plans to adapt the seriousness of Goldfish’s focus into a piece that is lighter and more contemporary. “This piece represents the submission of women within patriarchal society,” Lee said. “The piece that Kaoru Okumura, my dance partner, and I will be performing will borrow from the energy of Goldfish with the addition of our own humor.”

Another artist in the festival will be Shoko Zama, who teaches Taiji and Qigong and co-directs the Taoist Studies Institute which hosts this year’s butoh festival. “I’m dancing in Helen Thorsen’s piece Portal with four other women,” Zama said. “Dancing butoh for me is a meditation where I can put all of my creativity in the present moment.”

A major focus of this year’s festival is collaboration. “New this year is a work created and performed by DAIPAN called Corporate,” Laage said. “DAIPAN decided to develop it as a full-length work last year when we were invited to perform at the butoh festival in Santiago, Chile. We are very pleased to be presenting it for local audiences, especially since this is only the second time that our collective has created a work together.”

Laage describes Corporate as an examination of modern, corporate worklife. “Five dancers struggle for the top of the pecking order, sometimes collaborating, sometimes competing, and sometimes just marching to their own tune, while time is always running away from them,” she said. “What price do we pay for the money we earn?”

But the piece also explores alternatives to the contemporary rat race. “What happens when we break out of the cubicle and free ourselves from the obsession to succeed at all costs?” Laage asked. “The piece reflects concerns about economic inequality, the failure of corporate social responsibility, and abuse of power, and it fulfills our determination to serve as artistic ambassadors and seekers.”

The theme of Corporate coincides with the theme of festival as a whole: (Re)evolution. “Butoh lives under the paradigm of constantly self re-invention and timeless certainty felt only in the abstract, the now, the inside-to-inside communication betwixt bodies, space, and the universe,” Brown said. “After 10 years of collective and individual local and international study, expansion, and multi-faceted discussion, including performance, DAIPANbutoh Collective has come to know itself as a critical voice in the strange progression of events in our country and world.”

Daipan is now looking forward to its next decade in Seattle and beyond. “Comfortable in paradox,” Brown said, “our art expresses evolution through breaking down and twisting around, connecting paranormal, natural, and societal constructs to allow for a re-emergence of collective and personal present unconstrained by the dictums of the day.”