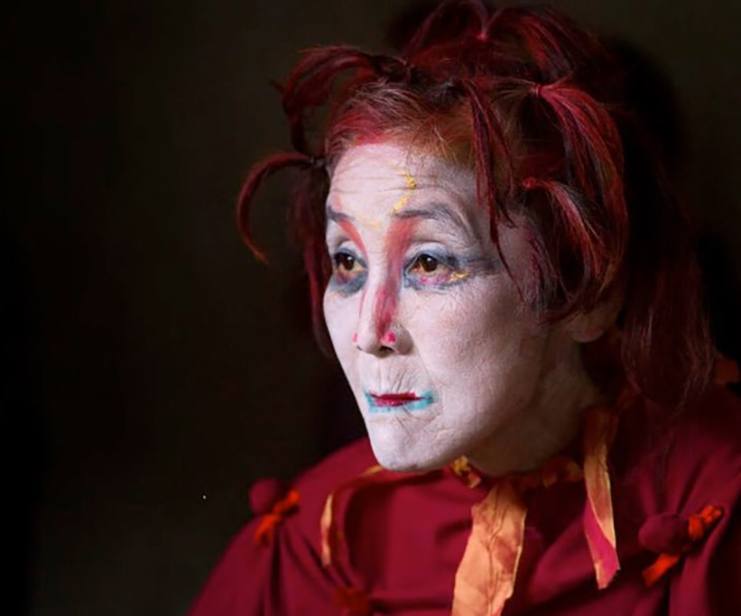 While Seattle has long been a center for the Japanese dance form of Butoh, the peninsula community of Port Townsend is now becoming another base for the practice and celebration of this aesthetic art. Last year, Iván-Daniel Espinosa and Cosmo Rapaport co-founded the Salish Sea International Butoh Festival, and this year, they will present the festival again from August 6 to 14.

Espinosa says the festival is focused on inclusiveness. “Our festival is founded on the principle that we welcome and include people from Seattle and beyond, bringing together the entire Puget Sound artistic community,” he said. “Salish Sea Butoh continues to be the only group consistently bringing national and international Butoh artists to the Olympic Peninsula in a retreat-style setting.”

This emphasis on inclusion is grounded in Espinosa’s lived experience. “I am a Latinx person of color (POC), so I am acutely and deeply aware of the importance of multiculturalism and reaching out to communities of color, including Asian and East Asian communities, that have historically been ignored in the art world,” Espinosa explained. “This multicultural artistic programming helps to adequately represent and celebrate our global cultural heritage.”

The physical manifestation of the human body in Butoh draws attention to the ground. “Butoh from the beginning has been ‘an earth-based, subterranean dance,’ often including stooped or crawling movements,” Espinosa described. “Butoh celebrates the body’s connection to the earth and the ephemeral quality of life.”

As both a dancer and choreographer, Espinosa is drawn to the varied environments of the forest, the beach, and wildlife havens. “For me and so many other Butoh artists like my formative teachers Hiroko Tamano and Seattle Butoh artist Joan Laage, the Earth takes the forefront, becoming an active participant in the choreography and dance,” he said. “What motivates me as a Butoh artist is the desire to explore how we can use art, specifically performance and dance, to strengthen our relationship to Earth and to remember how interconnected we are as human beings to ecosystems.”

Among the guest Teaching Artists in the 2022 Festival are three internationally-based Butoh dancers and choreographers: Hiroko Tamano, from Fukuoka, Japan, Katsura Kan from Kyoto, Japan, and Yuko Kaseki, now based in Berlin, Germany.

Tamano is concise in expressing how honored she feels to present at the Salish Sea International Butoh Festival. “This Festival is Ivan’s creation and farm land, the Circle,” she said. “He invited the seeds (elders). I am grateful to contribute to this harvest.”

Likewise, Kaseki is very happy to exchange energies and dance in person with others. “In art, we have the opportunity to understand and enhance each other’s interests, differences, weaknesses, and strengths,” she said. “Rather than me teaching you my way, we will train you to awaken your body’s perception and to respond with somatic sensitivity to your relationship with yourself, with others, and with the environment around you. I excavate the source of the movement of all living beings.”

Meanwhile, for Kan, leading Butoh workshops in Washington state pays respect not only to Butoh’s six-decade history, but also to American modern dance transition as well. “We can look at the evolution of American dance from a global point of view to realize how much Butoh has contributed to the world of Dance artistically,” he observed. “The Salish Sea International Butoh Festival represents the next generation for me as a new and progressive dance community in the USA that is focusing on Butoh.”

All three guests are hoping to create an experience both real and ephemeral. “I want to meet other unknown bodies and see their chemistry and spiritual reactions,” Kaseki said. “I believe that performance is not a one-way communication. It would be wonderful if we could open a very imaginative realm and create a magical space-time together.”

More specifically, Tamano emphasizes that the skin has two surfaces. “One faces outwards and is the daily life side,” she elaborated. “The other side faces inwards to your inner cosmos, the imaginal world. Ankoku Buroth is created by combining body mechanism plus imaginal strength. I want to help the students touch something real and profound inside of their bodies.”

Kan, however, takes an alternate approach, feeling that Butoh is not a form that can be directly taught. “Butoh is focus on your own dance and the organic transformation of your own body,” he said. “So instead of teaching, I’d rather be studying from the students and learning by witnessing the transformation of their own bodies, and then we create performance together in my workshop.”

In addition, Kan draws attention to age as a consideration in Butoh. “I am very interested to see the young and senior elder dancers converge at the Salish Sea Butoh Festival,” he said. “I would also like to get the comments from the audience members who are unfamiliar with Butoh. I want to ask them to feel my dance as if they were listening to music.”

Despite the contributions of such dedicated artists, creating this festival in the middle of the pandemic was not without challenges, which Espinosa feels the artistic team surmounted in 2021. “All of our shows and performances and workshops were sold out standing room only,” he recounted. “I have realized that audiences in the Puget Sound, both Asian and non-Asian, are very excited to experience live performance again and experience the unique art form of Butoh from Japanese veterans of the form.”

Although this Festival is dedicated to a specific dance form, Espinosa is optimistic about its ripple effects. “Projects like these contribute to better community-building and decision-making,’ he asserted, “while also introducing new ideas into the social imagination and increasing creativity and innovation within the Puget Sound region.”

Espinosa encourages those new to Butoh to explore this dance form. “Butoh has always welcomed people on the margins of society,” he said. “This is ‘a dance that invites everyone,’”