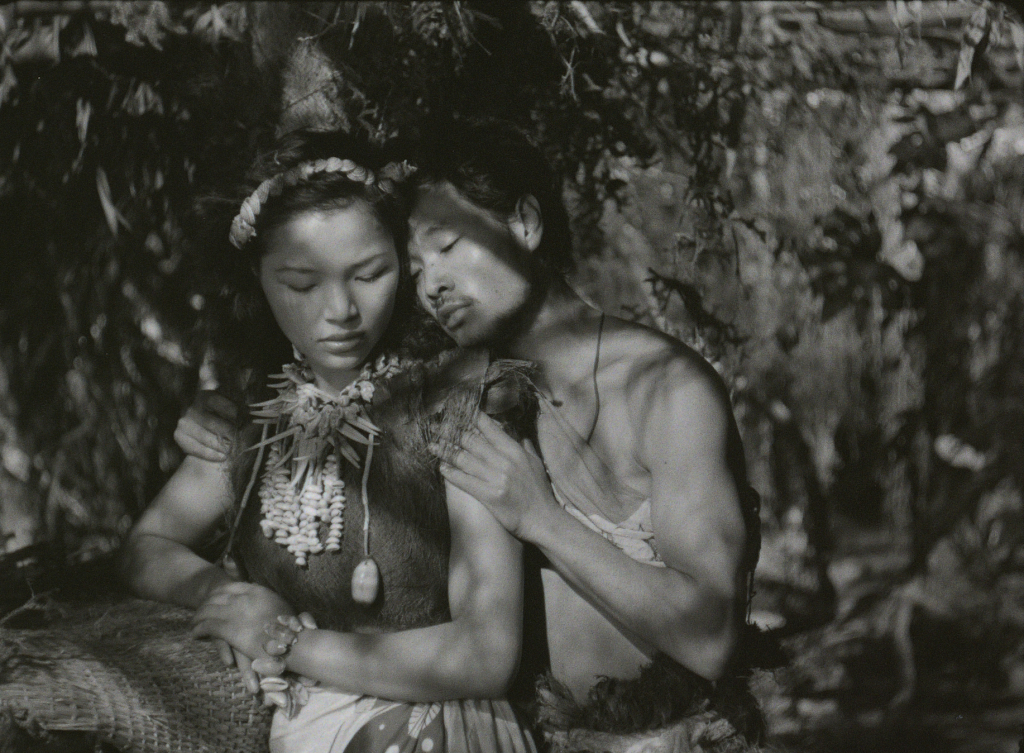 Filmed in 1953, in stark black and white, The Saga of Anatahan looks like a Twilight Zone episode taking place in a tropical jungle. And, just like that famous TV show, the film’s rich storytelling comes with a lesson for humanity.

After a dozen Japanese sailors shipwreck on a small South Pacific island during WWII, they encounter a former plantation overseer (Suganuma Tadashi) living there with a beautiful woman they assume is his wife. Keiko (Negishi Akemi) is called the “Queen Bee”, but her rightful king is undecided as each man competes to earn that title.

Loyal to Imperial Japan, the men vow to never surrender. Thus, they miss several opportunities to return home when they’re informed the war is over—announcements they view as the enemy’s tricks. Refusing to believe Japan could lose after conquering most of the Pacific, the sailors cling to their newfound island life; growing potatoes, fishing for eels, living in huts and wearing clothing made of bark and shells. One even fashions a shamisen (Japanese stringed instrument) from wire found in an abandoned plane wreck.

Their leader, a stern officer, forces them on rotational watches to guard the coastline with a machine gun he managed to swim ashore with. But as times passes, the men tire of his useless military mandates and begin brewing coconut wine. Soon, they’re drunkenly singing old Japanese barroom songs accompanied by the shamisen.

But no matter how civilized the sailors imagine themselves to be, they’re keenly aware there’s only one woman (and already spoken for) among them, driving them to behave like ruthless barbarians. As for Keiko, she does little to spurn their advances and flirtatiously flutters her expressive eyes to the chagrin of her overseer partner.

Based on a true story and written as a novel by Maruyana Michiro, Anatahan, looks like a play with its lean set designs. Yet, its robust tale is utterly compelling. Crisply narrated in English by director Josef von Sternberg, the film offers no subtitles but, instead, utilizes an effective method of having the characters speaking their native tongue beneath the voiceover.

Another tension-filled drama is Singapore’s entry in the Best Foreign Language Film category of the 89th Oscars. The movie, Apprentice, is purposefully and unobtrusively loud. There are metal gates slammed in deafening decibels, harsh entry buzzers, screeching sliding doors, and constantly ringing telephones to remind inmates they are at the mercy of their surroundings.

Twenty-eight year-old Aiman (Firdaus Rahman) was once a gang member, but a stint in the Army straightened him out. Now, his goal is to be a corrections officer working in rehabilitation. Landing a job at a maximum security prison—the very facility where his own father, a man who died before he was born, had been executed, Aiman is unsure of how he should feel.

His older sister, weary of the poverty brought on by their family circumstances, has found an Australian lover who wants to marry her. Feeling abandoned and angry over her choice of a new life over him, Aiman attempts to focus singularly on work. But soon, he’s apprenticed to the chief executioner, Rahim (Wan Hanafi Su), who has his own ghosts to contend with.

After assisting in an execution with Rahim, Aiman is troubled by the clinical manner in which the executioner instructed him to fit the rope on the prisoner’s neck for maximum effect, to snap the vertebrae cleanly. As he escorted the inmate to the gallows, Aiman helped soothe his nerves, coaching him how to breathe as the man’s knees buckled. Now, Aiman worries how much he can stomach in his new position. Further, he’s conflicted over bonding with Rahim, a man he should rightfully hate.