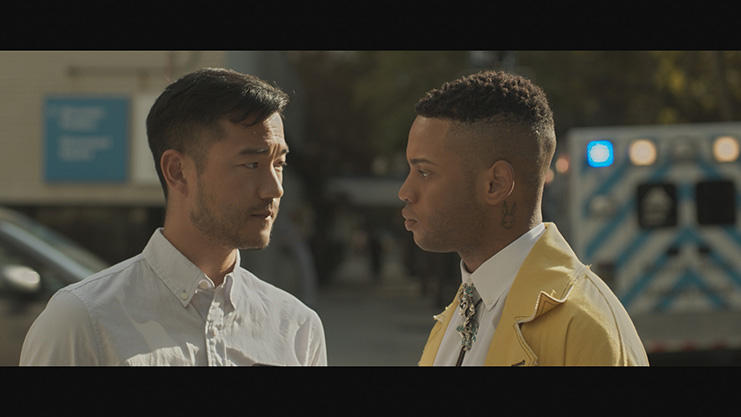 In the Short Film Programs, one is a collection of films centering the queer API experience. Although mainstream media has taken huge strides towards increasing the representation of both the Asian American and the LGBTQ+ communities, there are still very few media representations based on the intersection of the two identities. This year, there will be six short films that highlight experiences of queer API people: people of different backgrounds, born into different situations and at various times in their lives. Despite these differences, the core value that resonates through all these films is how these people — 27 like all other people walking the face of the world – struggle and learn more about who they are as they journey through life.

A Big Fat Taiwanese Same-Sex Wedding Banquet
In May of 2019, Taiwan made history by becoming the first Asian country to recognize same-sex marriage. On the day after the bill was effective, hundreds if not thousands of people gathered in front of the Presidential Office Building to celebrate the event. This film is a short documentation of that grand banquet, where many queer Taiwanese folks finally got the chance to walk down the aisle with their loved ones.

Bubble
Frances, the biracial main character in this film, faces the 2008 mortgage crisis with her family. While they were counting down the days until the housing bubble forces them out of their home, she also started to recognize her true feelings that she had towards her closest friend, Meagan. As the story evolves, you get to see how the characters relate and react to one another through crisis.

Kama’aina
In this story, we follow the steps of Mahina, a queer youth in Hawaii who walks the streets of Wai’anae, trying to get by. Without spoiling the end, this is a story based on a real novel community called the refuge of Wai’anae – home to about 200 people. Twinkle Borge, the leader of the refuge, is also featured in this film. Only by understanding the stories of people that became homeless can we more clearly understand the importance of supporting such communities.

Unspoken
Six queer and trans Asian Americans share letters addressed to people in their lives. Through finding each other as their chosen family and support systems, the six of them share their stories as well as their experiences of facing rejection, the cultural and language barriers, and the struggles that come before full acceptance from their families.

Halwa
This story is about a married middle-aged woman named Sujata who reaches out to her long-lost childhood friend, Premila. After decades of not speaking with each other, they were finally able to get in touch through social media. However, this friendship meant more to Sujata than just memories over the halwa recipe that she had kept.

Engaged
This film tells the story of Darren and Elliot, an interracial homosexual couple. While Darren tries to make multiple attempts to propose to Elliot, anxiety also starts to build up inside him as he faces heterosexual norms of the society. However, rather than being stuck in situations where he is put under the spotlight, this time, he must find a way to own that stage and pop the question to the love of his life.

The Queer AF program plays on Friday, Feb. 21, at 8:30 PM at the Broadway Performance Hall.