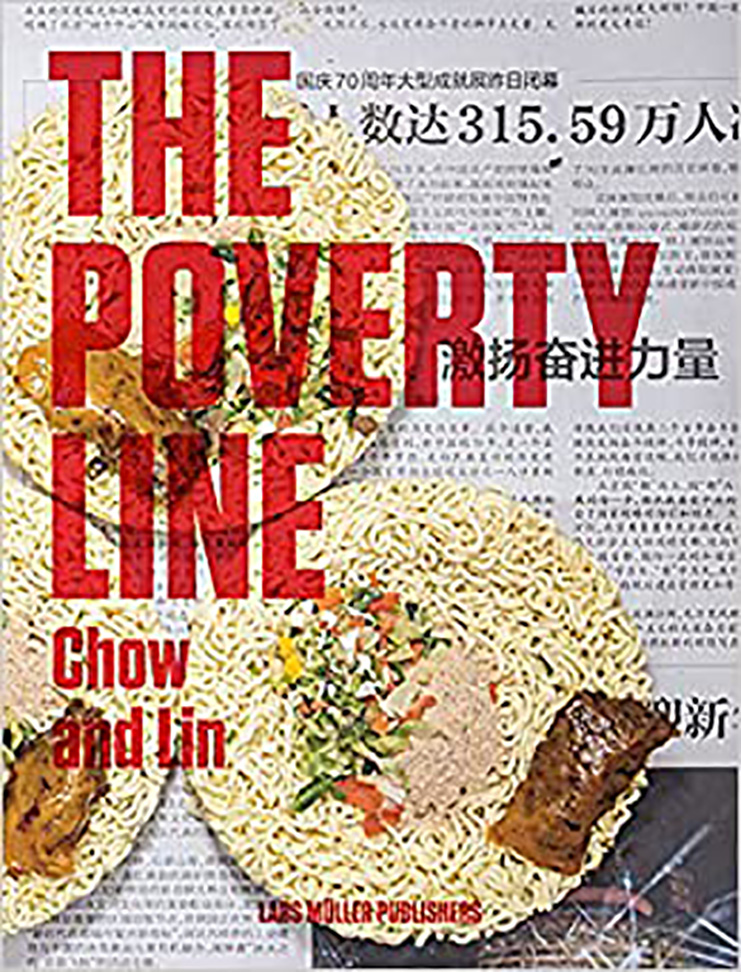 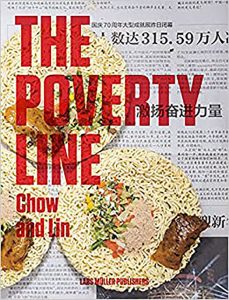 This 9 x 11 inches book at nearly two inches thick by Stefan Chow and Huiyi Lin sat on my table for several weeks. I didn’t know what to make of it. At first, I thought The Poverty Line might be a cookbook on how to create nutritious meals if one lives in poverty. Only on page 345, when Section 2 starts, does a narrative begin. The preceding pages are photos, both color and black and white, of various foods laid on what appear to be newspaper or magazine print in different languages. The newspaper and/or magazine depict advertisements and a variety of folks, including politicians, artists, athletes, celebrities and soldiers in various poses.

My second thought was that it was a puzzle. What was the relationship of all these foods? Why should I care? It reminded me of initial reactions to Marshall McLuhan and Quentin Fiore’s seminal 1967 book, The Medium Is the Massage: An Inventory of Effects. They are both highly visual books that have immediate and subtle, subconscious impacts making the reader pause to say, “What is this? What are the authors trying to convey?”

The pages following page 345 gave rise to a third thought when narrative complemented photos. The Poverty Line by Chow and Lin is a startling visual expression of the commonality of human beings via the foods they eat at the poverty line. These common foods, in rank order, turned out to be —eggs, apples, corn, instant noodles, bananas, tomatoes, Oreo cookies, poultry and pork.  Turns out that “Oreo cookies are sold in more than 100 countries around the world. Annual sales of Oreos amounted to USD 2 billion in 2016.” Although photos depict plant-based foods, vegetables do not rank in top nine foods most people eat.

Section 3 consists of three essays: “Poverty: What Is It and Why Do We Care?” by John Micklewright, University College London and Andrea Brandolini, Banca d’Italia, “Leaving No One Behind in Asia and the Pacific” by Armida Salsiah Alisjahbana, Under Secretary-General of the United Nations, and “World Inequality and Poverty” by Lucas Chancel, co-director of the World Inequality Lab.

I am uncertain about who would ever get to Section 3, and if they did, what would they think of, let alone do with, the writers’ observations of greater inequality within and across countries. An operational definition of poverty by the World Bank is living on the USD $1.90 a day. Micklewright and Brandolini passionately argue that there are both self-interest and collective moral reasons to reduce poverty and growing inequality within and across countries.

Chancel states, “The different levels of inequality are recorded according to world regions. In Europe, the most egalitarian region of the world, the richest 10% receive about 35% of the total income today. This is in stark contrast to the Middle East, the least egalitarian region of the world where the richest 10% receive 61% of the total income. In China, the figure is 41%, while in North America, it is 47%, and in India it is 55%…Since 1980, there has been a considerable increase in inequality in many regions. In fact, forty years ago, the richest 10% of the population never owned more than 35% of the total income in China, India, Russia, the United States or Europe; thus, there had been a major decline in inequality in all these regions between the beginning of the twentieth century and the 1970s.”

The writers’ main recommendation for alleviating poverty is for politicians and institutions on both sides of the Atlantic to redistribute power, a narrow European and North American perspective which excludes Africa, Asia and Latin America ones.  Chancel suggests, “… new taxes on the winners of globalization, the multinational corporations and their shareholders, who all too often escape paying these taxes through an optimization strategy or tax evasion. They are ‘mobile’ taxpayers, while the working and middle classes are ‘stationary’ taxpayers, who have often seen their tax bills rise in recent decades.” The authors do not recommend what would realistically motivate the rich and powerful, as well as the knowledge/information industries that serve them, to redistribute wealth and power to the lower and middle classes.

This would entail that the rich and powerful make what are essentially moral choices, as U.S. President Franklin Roosevelt did with the 1935 Social Security Act and President Lyndon Johnson did with the 1965 Medicare legislation and the War on Poverty. But these two historical acts were preceded by active, sustained global involvement of the grassroots, the people on the bottom. That is, powerless, poor, marginalized people themselves rose up and challenged the Gilded Age with the international labor rights and union movements of the 1930s and the again with Civil Rights Movement of the 1950s and 1960s.

In terms of methodology, I wish the authors would have stated how and why these geographical regions were chosen. It is troubling and misleading that they mix/compare countries, such as China and Brazil, with regions, such as Europe and the Middle East. There is no title or explanation for how to read and analyze the world map on pp. 334-335. The presenters’ bias is one of knowledge based in bureaucratic institutions of countries that are well above the poverty line. A sentence or two about how the Organization of Economic Cooperation and Development (OECD) categorizes and identifies rich and poor nations would be helpful. While the visual photos and arts are eye-catching, more context and facts could stimulate robust thinking, even if not decision-making or action. So, again, “Who is the audience?”

Finally, while this book acknowledges the exacerbating consequences of the coronavirus, it does not address two 21st century crises—people who are not just consumers of food and material resources but consumers of more information, especially misinformation, which is accompanied by the execution of journalists; and the commodification of everything and everyone raising concerns for “the death of the artist.”