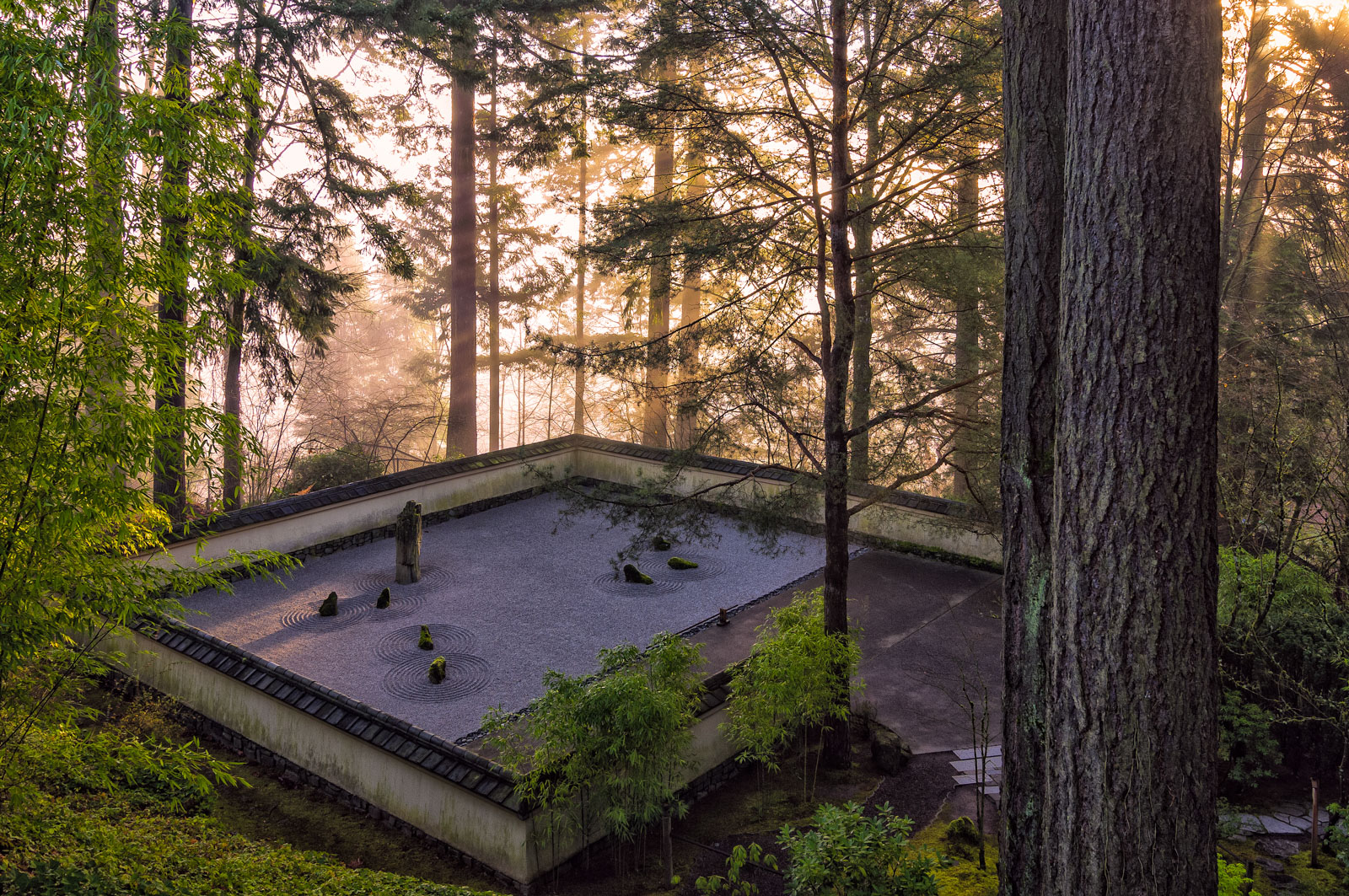 A garden is a place to appreciate nature. More than just a walk in the woods, a garden is a work of craft, a natural environment envisioned and cultivated by humans. A garden offers respite from stress; the refreshment and invigoration of a beautiful landscape; at its best, an elevated state of mind. Every culture has its distinctive approach to gardening. Here in the Pacific Northwest, we are blessed with a myriad of Asian gardens. A jewel among them is the Portland Japanese Garden.

A garden within a garden, the Japanese Garden is set on a hillside in Washington Park, in Portland’s West Hills neighborhood. Opened in 1963, it was one of a wave of Japanese gardens created in the U.S. in the wake of World War II, to promote peaceful ties with Japan. But its design sets it apart from other gardens in Japan and the U.S. While Japanese gardens typically represent a single historical style, Portland’s garden encompasses five different styles, laid out over an expansive twelve acres. The original plan by Professor Takuma Tono of Tokyo Agricultural University allows visitors to experience the range and history of Japanese garden design.

The past decade has seen an expansion of the physical architecture and cultural programs within the garden. Diane Durston became the first Arlene Schnitzer Curator of Culture, Art and Education. An author and scholar who lived in Kyoto for almost two decades, she brought artists from Japan, and launched the Art in the Garden exhibitions, immersing Japanese art in the context of the garden. Around the same time, Sadafumi Uchiyama, a third generation master gardener from Japan, became the Garden Curator. Working with renowned architect Kengo Kuma, they re-envisioned the garden’s entry sequence.

In the original design, visitors drove to the high point of the site and entered the garden directly from the parking lot. The new design places parking (except wheelchair spaces) at the foot of the hill. After passing through an admissions portal, visitors follow a stone-paved path beside a cascading stream, leaving the sound of traffic behind as they ascend a wooded slope, emerging into a courtyard framed by simple stone and wood pavilions with plant-covered roofs. This Cultural Village complex, opened in 2017, recalls the Japanese towns that front ancient temples and shrines.

From this town square, a traditional wooden entry gate opens into the Flat Garden, centered on a dry pond of white gravel, raked to resemble rippling water. The trees and plants surrounding the pond, some over a century old, have been carefully selected to provide color and drama in every season. Shrubs pruned in the shapes of hills and mountains form an abstract landscape. The Pavilion Gallery, completed in 1980, overlooks this landscape on one side, and a vista of downtown Portland and Mount Hood on the other. The garden’s largest exhibition space, the gallery houses the quarterly Art in the Garden shows.

Adjoining the Flat Garden is the Strolling Pond Garden. Although larger in area, it has a more enclosed feel. Trees are taller and more naturally shaped. Winding paths reveal views of a stream connecting two ponds and spanned by two bridges: a classical Moon Bridge and a Zig-Zag Bridge. Heavenly Falls cascades into the lower pond. Water-loving plants such as lilies and irises are featured. This strolling pond style of garden was developed for aristocrats of the Edo period (1603 – 1867).

A smaller Tea Garden borders the Strolling Pond Garden. More rustic in character, tea gardens are designed to feel like a journey from the city to a place of seclusion. Here, a path leads to the Kashintei Tea House, built in Japan and assembled in the garden in 1968.

Downhill from the Flat and Strolling Pond Gardens are two smaller, secluded spaces: the Natural Garden and the Sand and Stone Garden. The narrow stone paths and stairs of the Natural Garden meander past benches and platforms, places to rest and reflect, surrounded by forest. Originally designed as a moss garden, the site proved more hospitable to deciduous plants, including several indigenous Northwest species not typical of Japanese gardens. The Natural Garden is the wildest and most contemporary of the gardens.

At the end of a path is the Sand and Stone Garden, a rectangle of white gravel meticulously raked around eight standing stones and surrounded by a wall. This style, popularly referred to as a Zen garden, is often found at Zen monasteries. The austere landscape is intended to foster contemplation.

Art in the Garden is a series of quarterly exhibitions of work by Japanese artists and American artists inspired by Japanese aesthetics and traditions. Curator Diane Durston uses the garden setting to give cultural context to the work and to illuminate Japanese ideas on the relationship between art and nature. In 2018, the Portland Japanese Garden is celebrating the Year of Kyoto. The autumn show focuses on Gion Matsuri, an epic festival celebrated annually in Kyoto for over a thousand years. The climax of the festival is a parade of elaborately decorated floats. An authentic parade float displayed against a wall of video monitors configured like Japanese folding screens, allows viewers to vicariously experience this year’s parade.