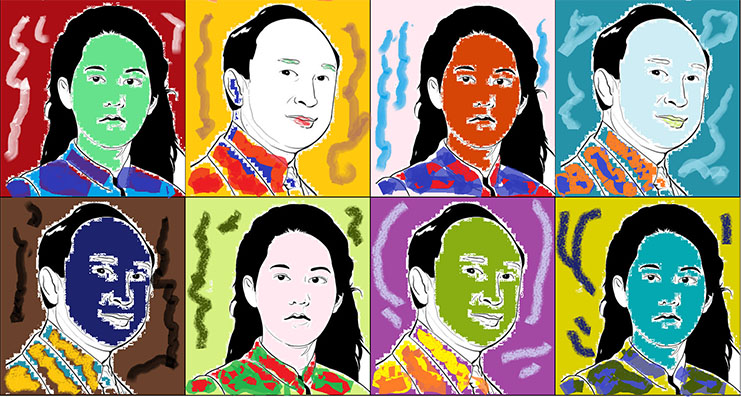 As Washington state continues to make progress on its Healthy Washington Roadmap to Recovery, in regard to the current COVID-19 pandemic, local theatre artists continue to reach out to audiences and build community in creative ways.  Playwright Leslie Lum and director David Hsieh are partnering with Playwrights Theater Company in Canada to cast and present Lum’s play Geomancer, which centers on a rocket scientist who is deported because of his Chinese origins – a timely theme considering recent attacks against Asians and Asian Americans.

The play is rooted in mid-20th-century politics, based on work by American biographer Iris Chang. “Geomancer started out as an exploration of Tsien’s persecution and return to China during McCarthyism after 20 years in the U.S. despite his genius as a rocket scientist,” Lum said. “It delved into his deep relationship with his mentor Von Karman, the father of aeronautics.”

Lum also ties her play to other recent historical events. “In 2019, the NIH and FBI purged Chinese cancer researchers accusing them of secretly aiding and abetting cancer research in China,” she said. “The interplay between history and memories and truths is something our country continues to grapple with.”

Hsieh, who will be directing the reading, agrees and feels that theatre can make history more accessible. “I’ve learned a great deal more about Iris Chang, a bestselling author I was already familiar with from my years of working in a bookstore,” he said, “and I’ve also learned about historical scientists I had no knowledge of prior to this.”

This play is a multi-decade project of Lum’s. “Geomancer has actually been read twice before, once in 1999 at the Theater Off Jackson in a very literal reincarnation with only Tsien and Von Karman, and then in 2017 at the MSG workshop at the Vancouver Asian Canadian Theater where Iris was added,” she said.  “I was given an amazing dramaturg to work with and professional actors who had performed on stage and film. That was an amazing amount of support for an emerging playwright.”

Years ago, Lum was a creative writing major in college and participated in the Asian American Writers’ Workshop.  “This resulted in publications in Canadian Literature, Wascana Review, Canadian Anthology of Short Fiction Volume II, Into the Fire: Asian American Prose, Asian Week, and Asian American Journal,” she said. “Learning to write for theater was another journey that I embarked on by going to theater, opera, and other forms of live performance.”

She appreciates the added flexibility that the theatre stage brings to storytelling.  “With Geomancer, we encounter the characters Tsien and Iris after they have died,” she said. “I set it partially in the Bardo and it moves over a span of 60 years. All this is important to the themes or history repeating itself and breaking cycles of destruction.”

Lum reports that the play reading was originally scheduled for last spring, but was postponed due to the COVID-19 pandemic, but now the online Zoom format is allowing for new and unexpected collaborations. “What is heartening about this effort,” Lum said, “is that these prominent actors are committed to this piece, feel that it is the right time for it and are willing to support an emerging playwright.”

Hsieh agrees. “When Leslie asked me about the possibility of directing and we met to discuss the play, I found the subject matter intriguing and interesting and thought it would be a good script to explore and fun to help develop it further,” he said. “As a historical play, it is particularly interesting at this time with the recent rise in Asian hate crimes in our society.”

The rescheduled reading will not only highlight the artists involved, but will also serve as a fundraiser for the International Examiner itself. “The IE has been the place for preserving the stories of our community because it has been around for over 40 years,” said Lum, who is also a board member of the International Examiner. “It has helped other community organizations like SAAFF and APACEVotes find a voice and platform.”

The IE’s role as an independent press, as well as a media outlet, fills an important gap.  “There are so few independent presses right now and IE served as a portal for Ron Chew’s memoir which is so important in this year when we are losing so many of our important elders,” Lum said. “It’s publishing a book on women activists, who played a dominant role in major social movements of our community like redress.”

Lum hopes that the local community will support the International Examiner’s work however possible. “It’s about time their stories are told,” she said. “At a time when it is important to have our voices be heard, I can’t think of a more worthy cause.”

Geomancer runs May 22 to 29 online, https://www.facebook.com/GeomancerPlay/ and geomancer.site. All ticket sales proceeds will benefit the International Examiner.