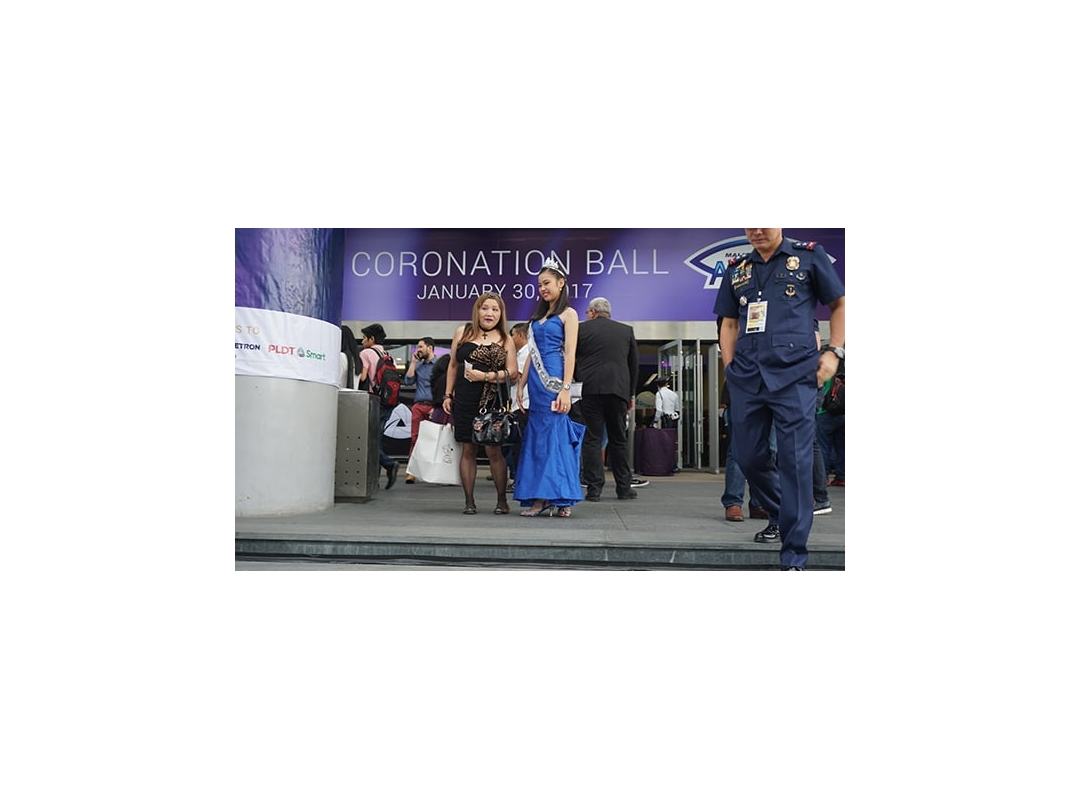 MANILA, PHILIPPINES—A wave of roaring sounds was heard inside and outside of the Philippines’ SM Mall of Asia Arena throughout the three-hour live telecast of the 65th Miss Universe pageant.

And for each roar, a young woman’s dream came closer. Miss France Iris Mittenaere, 24, beat out 85 other contestants for the coveted title.

Dressed in a lilac colored outfit, Filipino-American Myrna Boxell flew in all the way from Federal Way, Washington to watch the much anticipated event. She along with her niece arrived at the venue at 5:45 a.m. and was greeted with long lines as ticket holders moved at a snail-like pace before entering the security-tight venue.

“It’s very fun. I’m very happy because people here are very supportive. No matter who the country is, they support them. While I was watching, some sitting beside me prefer Haiti. Others prefer Colombia or the Philippines,” Boxell said.

This is her second time attending the Miss Universe coronation event. Her first was in 1994 where the Philippines also hosted the international event. Asked about the major differences, “the set-up is better, it’s more modern, and they’re well-organized,” she said. “It’s much better if you watch it live because it’s even more exciting.”

Miss France’s team chanted, “On a gagné! On a gagné! [We have won! We have won!] upon existing the doors of the venue—an euphoric moment.

“Iris [Miss France] was determined to get the crown. And she brought us up until the end. And we’re even more proud than her,” said William Cerf, hairstylist and makeup artist for Mittenaere, after the win.

Miss France’s boyfriend Matthieu Declercq was also part of the contingent team. Dressed in a black suit and a bright colored red tie, “the atmosphere is incredible,” he said.

The last time France won the title was in 1953. Mittenaere is the second to earn the title.

To ensure safety for both contestants and the audience, 672 uniformed and armed personnel were deployed outside the parameters of the venue while 353 unarmed personnel along with two snipers and two observers were stationed inside the venue, according to Oscar D. Albayalde, Commander and Task Force in-charge of Miss Universe.

“We try to avoid anything whether it’s a threat or not because [this] is the pride of our country. … And we also need to calm and give assurance to our VIPs and guests all over the world,” said Commander Albayalde.

National director of the Miss Iceland Universe, Jorge Esteban had watched the pageant three blocks away from the SM Mall of Asia Arena. Esteban, who is also president of PageantSmart, a pageant interview consulting firm, describes the level of security:

“We had to go through metal detectors, dispose of any liquids, and any items that could be used as a weapon,” he said. “I had a national Icelandic flag on a wooden stick and security asked for the flag to be taken off the wooden stick. I was told if the flag was on a plastic stick it was acceptable but not a wooden stick.”

Even hours before the doors were opened, local and international fans arrived dressed in various array of attires from gowns to the vibrant colors representing their favorite candidate’s country.

SM Mall of Asia Arena holds a capacity of 15,000 spectators. Yet Commander Albayalde said that more chairs had to be added on the floor.

No threats were reported at the start of the competition except for an anticipated street protest by Gabriela Women’s Party after the pageant.

In a statement on their website, the group described the 65th Miss Universe pageant as an “unglamorous and exploited state.” But no mention of the post-pageant protest was mentioned on their website and on their twitter account.

Hosting the Miss Universe Pageant: The Pride of the Country

Philippine President Rodrigo Duterte’s administration issued several decrees regarding the international event on December 28, 2016—namely roads were not be closed, street dwellers should not be hidden to portray a false image of the country, and lastly, all levels of government agencies were to provide their “full support” leading up to the event but not to use public funds.

In an interview that was broadcast on January, 27 2017 on Reaksyon, a late night news magazine and public affairs show on TV5, Philippine Secretary of Tourism Wanda Tulfo-Teo said the windfall of the Miss Universe plays a major role in the country’s tourism.

But critics argue that they have yet to see the numbers post-Miss Universe.

Even with the recent death of Korean businessman Jeon Jun Seo, tragedy as such doesn’t hamper the arrival of tourists. According to Secretary Tulfo-Teo, a high number of tourists visiting the Philippines continue to come especially from Korea, Japan, and China.

“Even the candidates of [Miss Universe], they said after the contest, they will return because the Philippines is beautiful,” said Tulfo-Teo.

For Estaban, it’s his first time visiting the Philippines. While he and his team only stayed in Manila, it was the Filipino attributes that impressed him the most. “We were treated with respect and love wherever we went by the Filipino people.”

Cerf couldn’t agree more. “It’s instantly the second most beautiful country in the world,” he said.

The 65th Miss Universe pageant was hosted by Steve Harvey with Ashley Graham as the backstage host. American rapper Flo Rida kicked off the event while singing group Boys II Men serenaded the final three contestants before the big win.