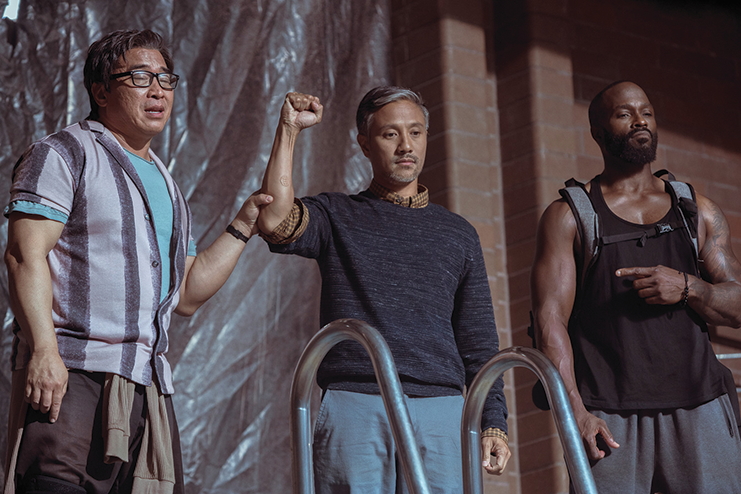 There is a moment in the feature film The Paper Tigers when the legendary Three Tigers reunited after a brawl with three gung-fu orphans.

“We might be a disgrace,” Danny Cheung (Alain Uy) proclaims, with blood crusted around his lips, while recovering with his fellow Tigers in equally poor shape. “But Sifu [‘master’ in Canontese] only had three disciples.”

That familial relationship of disciple-to-sifu and disciple-to-disciple is the theme for The Paper Tigers, the full-length film debut of Bao Tran. While the film self identifies as an action-comedy, the strong themes and chemistry of the main cast brings this film towards a family drama more than anything else. Inspired by the kung fu films of yesteryear such as Drunken Masters and Way of the Dragon, Tran directs a film on creating a modern film with these classic tropes and archetypes.

The premise is simple. After the mysterious death of Sifu Cheng, his three former gung fu prodigies have reunited to unravel the truth of their master’s death. Once the shining stars of the Seattle Chinatown martial arts community, the Three Tigers have broken up and moved their separate ways. Our main protagonist, Danny, is workaholic dealing with the struggles of being a father as the film begins. The death of his sifu reunites him with the other Tigers, Hing (Ron Yuan) and Jim (Mykel Shannon Jenkins). Together for the first time in three decades, the Tigers struggle against current gung-fu rising stars, rivals and their aging bodies through Chinese restaurants and underground fight clubs.

Given the challenge that Tran has laid before him, the film also attempts to reconcile the place of kung fu films in the current media landscape. Martial arts, such as Kungfu, Tai Kwan Do and karate, have been succeeded by their contemporaries of Brazilian ju-jitsu and mixed martial arts (MMA). Kungfu films are no longer as profitable as tentpole franchises such as the Marvel Universe and the stars, such as Jackie Chan and Jet Lee that once were able to carry Kungfu films, are retiring or slowing down. Even our protagonist, Jim, has made the transition to MMA. The media landscape does not provide much room for the imagination of choreographed fight scenes where the alternatives are MMA competitions (UFC), can last less than 14 seconds to wrestling (WWE) action sequences that can last up to 60 minutes in front of a live audience.

The fight scenes in The Paper Tigers are short and gritty, keeping in line with the contemporary Chad Stahelski-esque (John Wick) action sequences. Stahelski’s style of short hard-hitting fights with audible bone breaks and brutal finishes is evidence throughout this film. The Paper Tigers’ fights are often short and leave the audience wanting. Where these action sequences succeed is that they make the audience care about the fights. Tran manages to allow the characters to carry the emotional weight and the consequences in each fight, making the audience emotionally invested in these scenes.

“You can’t go home again” is a phrase made famous by Thomas Wolfe’s book of the same name where the protagonist searches for his identity after newfound success and failure. Through this film, it is obvious that you can. The strength of this movie is carried by the main cast of Uy, Yuan and Jenkins. Their past and present drive these characters throughout the film, bringing the audience along their journey. Here, using this cast and their strength, Tran has crafted a film that focuses on the emotional side of combat and the struggle to get back home.

The Paper Tigers plays at SAAFF. See the SAAFF website and program page for details.