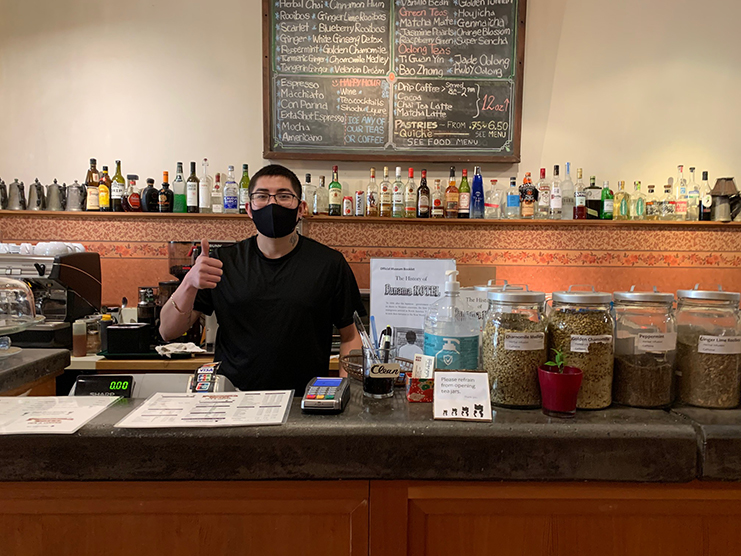 The Panama Hotel Tea and Coffee House in Japantown, International District, has 110 years of history of serving the community — from Japanese immigrants to diverse locals to foreign visitors. Despite financial difficulties caused by the pandemic, the owners have managed to keep the business going in order to continue to tell the history of Japanese immigrants in Seattle.

The Panama Hotel is a national treasure that the National Trust for Historic Preservation has recognized since 2015. It was built by a Japanese architect in 1910 and historically benefitted the Japanese community in Seattle.

The hotel preserves memories of the community, such as the Japanese Bathhouse (Sento) and the belongings that the original owners left behind when they were incarcerated during World War II. The Tea and Coffee House opened in 2001 with an aim to offer customers history-based education while serving tea or coffee.

Although the hotel is currently closed to visitors, the cafe is still operating every day, from Mondays to Sundays.

Before the pandemic began, the cafe was open from 8 AM to 9 PM. Due to a decline in customers, now the cafe is operating from 9 AM to 4 PM.

Jan Johnson, owner of the Panama Hotel and the Tea House, described the financial situation after reopening the cafe from lockdown as “devastating.”

“The payment didn’t come up at all. There were only three to five customers a day. But I did get one of the small loans to pay my staff, so I kept them going, and that was important to me,” Johnson said. “When I didn’t have that [the loans], I paid my staff out of my own money, from my own pocket.”

“I also sold a piece of property to pay staff,” Johnson said. “I did a lot of that throughout the years.”

“If I didn’t do that, this place wouldn’t be here.”

Since the pandemic began, the cafe has seen about a 30 – 40% decrease in customers.

“I still see my regulars, but I don’t see the new faces. I don’t see any travelers anymore. During summer times, we used to be packed with a lot of people visiting from other places, but now it’s kind of like a ghost town,” said Luis Cruz, the barista at the Tea House.

“There are no more meetings here. Only people come by themselves or maybe with another person, but you never see three or four people or family come in together.”

The change in customers as a result of the pandemic caused the cafe to put a pause on happy hours, which they sell wines and liquors at a cheaper price between 6 PM to 8 PM.

“When people were still traveling and people were walking around the streets, those type of people wanted to drink.  But now most of the customers we get come for the coffee and tea in the morning, not so much for drinking,” Cruz said.

The atmosphere of the cafe has also changed because of social distancing and regulations.

Before the pandemic, the Panama jazz band, which tells the story of Japanese immigrants through music, regularly visited the cafe and played live music.

“It was nice because when you opened the door, people outside could hear the music,” Cruz said.

Even when the band was not there, the cafe was a lively place for the community to socialize. People used to have book meetings and engage in language learning by gathering at a big table. Birthday parties and wedding receptions were also held occasionally.

Although the cafe is not currently serving customers in the same way it used to, Cruz tries his best to maintain the welcoming environment of the cafe for both regular and new customers.

“Everybody here expresses themselves,” Cruz said. “I ask customers how they are doing. Sometimes people need to just vent. I’m down to listen and make their drinks and make them feel welcomed because this is the community area.”

Arika Osaka, a regular customer, describes the cafe as “a haven of rest.”

“Because of the pandemic, places that I can go got limited. So now I come here at least five days a week,” Osaka said. “The owner and baristas have always been so kind that they are willing to listen to my struggles.”

“I’m thankful for Jan to manage to keep the cafe open because every time sitting in my favorite spot and having Hojicha tea with Japanese cake, I feel relieved.”

Despite the financial stress, Johnson has kept working on the interior decoration of the cafe in order to bring positive energy to customers. While the cafe was closed during lockdown, she repainted the walls ceilings by herself.

“Ms. Johnson makes sure to buy flowers here all the time. For Christmas, she bought the Poinsettia for every table,” Cruz said.

“You needed to have a cheery mood for the holidays and New Year,” Johnson said.

Johnson is hoping to reopen the hotel too as soon as the pandemic situation gets better.

Johnson is still looking for someone to take over the Panama Hotel. Although there were many people who made offers, she has not found someone who is willing to keep the building in its original shape, such as not replacing public bathrooms with private bathrooms or install elevators.

“If somebody comes to me and says they do this and do how I see it, they can just take over like I took over from Mr. Hori in 1985,” Johnson said. “I want to do it before I die to make sure that it happens in the right way.”