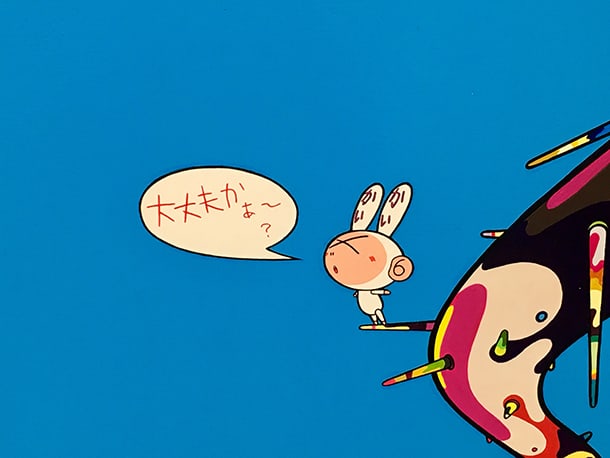 Right now, there is no mistaking the arrival of the most recognizable contemporary Japanese artist’s work in downtown Vancouver. Anyone passing near the Vancouver Art Gallery can’t help but be surprised by the sight of a massive, brightly colorful octopus head perched atop the building’s roof. The glittery round eyes of the inky blue octopus are part adorable and part ominous as they scan the cityscape. This utterly captivating installation is the perfect greeter for the Takashi Murakami The Octopus Eats its Own Leg, an awe-inspiring exhibition well worth travelling three-hours north to see.

It’s easy to mistake 56-year-old Murakami as a mere pop artist, as his fame began with commercial crossover collaborations. “I was just using Orientalism, using the manga image” he says, referring to the period in the late 1980s when he was struggling to find himself in the New York contemporary art scene.

After being exposed to Damien Hirst and Jeff Koons, he no longer saw the commercial crossover as a risk, but rather a way to more meaningfully establish his identity as a Japanese artist and connect with more people – and emerge he did, gaining worldwide fandom.

Because of his unique perspective, Murakami would likely welcome anyone who comes to the exhibit for no other reason than to get a selfie with the meticulously sculpted “The Kanye Bear” (2009) or to be cheered up by the Instagram-friendly, smiley-faced filled wall of “Flowers, flowers, flowers” (2010). But linger long enough – which you can’t help but do – and it will also be difficult for anyone to walk away unaffected by the subtly complicated emotions behind these cheerful characters.

This retrospective – and its accompanying catalog, a comprehensive guide produced in collaboration by the Museum of Contemporary Art Chicago, where the exhibition originated, and Murakami’s Kaikai Kiki studio – traces Murakami’s 30-year career. In mostly chronological order, both the exhibit and the catalog follow his evolution from a student Ph.D. working in monochromatic Nihonga into the anime and manga inspired Superflat work for which he became famous. Mr. DOB, the mouse-like character who made his first appearance in the early 1990s and reappears in works created decades later, “became both a brand ambassador and a stand-in for the artist’s creative ambitions,” notes Michael Darling, curator and editor of The Octopus Eats its Own Leg. Underneath the cheerful colors and meticulously finished, stunningly uniform low luster silkscreens and acrylic paintings (which have grown larger and larger with the scale of art production expanding at his Kaikai Kiki studio), there lurk frequent appearances of nuclear clouds, skulls, and the occasional inscriptions of mild Japanese profanity.

One of the most jaw-dropping works is housed in a darkened gallery towards the end of the exhibit. At 10 feet high and 32 feet long, “100 Arhats” (2013) is the largest of the three murals featuring Arhats (enlightened beings in Buddhism). The scale of the piece is proportionate to the impact the 2011 earthquake and tsunami disaster had on the artist, and his desire to pay homage to Japanese traditions, both religious as well as artistic tradition, in its wake. Though more overtly serious at first glance, fans of his earlier work will find traces of his humor in the Arhats’ details, from the patterns of their clothing to their rainbow color nose hair.

The subtitle of the exhibition, The Octopus Eats its Own Leg, came from the Japanese saying tako ga onore no ashi wo kuu. It’s a hard concept to translate into English, but is about surviving difficulty by sacrificing oneself. The octopus eats is own leg to survive, but knowing the tentacle will eventually regenerate. Perhaps that greeting octopus at the top of the Vancouver Art Gallery building is the artist himself, consuming and breaking down his own history, culture, and success to continually re-emerge anew. Darkly light, cheerfully hopeless, and seriously unserious, The Octopus Eats its Own Leg will inspire every fan to revel in this complex artist’s ambition, imagination and mastery.

Takashi Murakami: The Octopus Eats Its Own Leg is on display the Vancouver Art Gallery Feb. 3 – May 6.