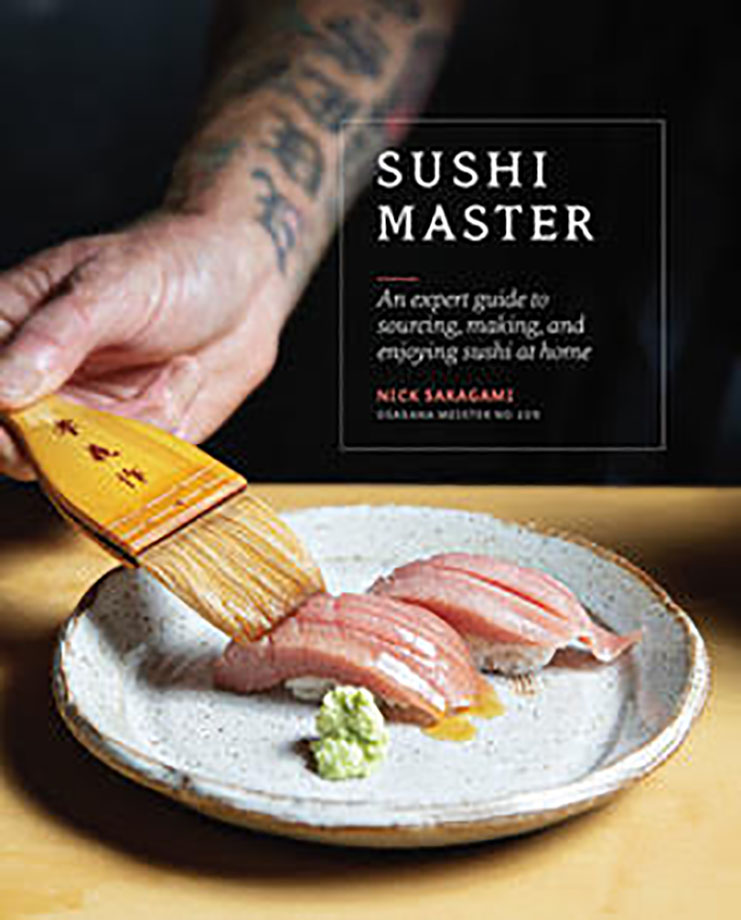 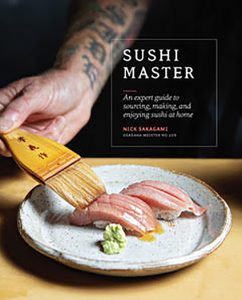 But, when the book, Sushi Master: An Expert Guide to Sourcing, Making, and Enjoying Sushi at Home arrived on my doorstep, my interest in the Osakana Meister heightened considerably. I have to admit it was the “Enjoying Sushi” part of the title that caught my eye, delivering a sudden wake-up nudge to my salivary glands.

It turns out that the book’s author, Tetsuya “Nick” Sakagami, is “the only person outside of Japan to earn the designation Osakana Meister” – presented to him at Japan’s esteemed purveyor of haute cuisine sea eats, the Tsukiji Fish Market. To date there are fewer than 200 Osakana Meisters worldwide – all of whom reside in Japan. Sakagami, who received certification in 2009, is the exception. Swift of mind, I concluded: This recognition is significant.

Sakagami, an immigrant from Japan and long-time resident of the City of Angels (aka, Los Angeles) is a certified fish master (not the same as a fish monger – one who sells fish). The translation of Osakana Meister for Fish (Animalia chordata olfactores vertebrata) Boneheads means that Nick can “identify every sushi fish species and their hundreds of subspecies by taste, feel, sight, and smell”. AND Sakagami also has “an expertise in tuna”. I, on the other hand, require a picture menu or sampuru (plastic replica) to recognize sushi by type and ingredients. And (full disclosure), my tuna bragging rights begin and end with StarKist and Chicken of the Sea.

What prompted Sakagami to choose to become an Osakana Meister? Born in Tokyo, as a child he grew up in Shikoku the smallest of the four main islands of Japan. Fish was at the center of each family meal. It was therefore only natural that meal conversations involved “how and when to eat various types of fish”. However, it wasn’t until 40 years later that he realized the role these home school conversations played in shaping his destiny.

At age eight, he returned to Tokyo, later attending Kaisei Academy, a prestigious all-boys private secondary school. During his junior and senior high school years, at close to six feet tall, he became an obsessed basketball fanatic. In the late 1980s he moved to the U.S. with his fantasy of becoming a basketball player; but compared to the Americans he encountered, he was considered just a “little Asian kid” and soon realized his height and skills were below those of Californiacs on the highly competitive courts of the Golden State.

Sakagami worked part-time at a sashimi-grade seafood wholesaler company, attending community college in Santa Monica, then transferring to the University of Southern California where he studied Urban and Regional Planning. He was hired by a Korean fish market seeking a Japanese-speaking salesman to help it break into the growing sushi restaurant business. After four years working there, and over two decades in the fish industry (which he grew to love) Sakagami established his own import/export sustainable fish consulting business.

Between 2001 and 2006 the self-proclaimed “Afishanado” began importing fresh tuna to Los Angeles, New York and Cincinnati, Ohio – covering the major areas of the U.S. He is now one of the largest distributors of fresh tuna in the country. In 2009 he received his Osakana Meister accreditation.

The founder and president of NNPR, Inc., co-owner of Gallant, Inc. and still ardent basketball fan, Sakagami is an expert in the global sashimi-grade business as well as high-end seafood farming and logistics. A certified saké advisor, his next goal is to add saké sommelier to his burgeoning resumé.

At just over age 50, he is dedicated to the use of environmentally friendly, healthy practices, responsible fisheries and sustainable world fish stocks. Sakagami believes he has the responsibility to share his knowledge and has stated that his dream is to have everyone make informed and intelligent choices on seafood consumption in order to maintain fish for generations to come. His recent publication, Sushi Master: An Expert Guide to Sourcing, Making, and Enjoying Sushi at Home, is his latest effort in fulfilling his dream. 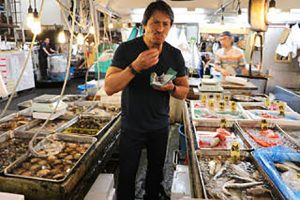 The target objectives of Sushi Master are, in the words of the author:

1. “In this book you will discover information that only fish wholesalers know. You will learn tips and techniques some people in the seafood industry might not be happy about sharing.”
2. “This book is about making sushi at home.”
3. “I also want to introduce how we the consumers can play a small yet important part in ensuring future generations have fresh fish.”

In the introduction What is Sushi?, Sakagami packs a surprising amount of information in this slim 168-page volume, including some interesting revelations, e.g., sushi’s origins were as “a fast food, usually consumed while standing.”; a brow raiser – the meaning of sushi (sour tasting); the influence of Japanese culture and philosophical perspectives of perfection and simplicity are embodied in sushi; the stark differences between a piece of Japanese sushi (a delicate balance of flavors using just one type of fish or vegetable per piece) and American sushi (bold flavors created with strong colors and numerous fillings piled into and onto every piece). Also included in the introduction are a dictionary of the basic forms of sushi, and rules and manners in the use of chopsticks, place settings and sushi eating etiquette.

The photos are particularly helpful in illustrating sections of the book, such as Tools, where a picture (worth hundreds of words) is a clear representation of what may be unfamiliar objects to some, e.g., a makisu (bamboo rolling mat) or Deba hocho, Santoku hocho, Yanagi hocho (three basic knives used in the preparation of sushi).

Beyond rice, soy sauce and wasabi is a world of condiments and flavorings that go into the making of sushi. Sakagami delves into well over a dozen of them. His section on Fish Preparation provides a step-by-step photographic documentary with written instructions on how to cut tuna loin as well as salmon fillets into saku strips for sushi and sashimi. For Uni fans who enjoy eating but are at a loss regarding preparation of these 450-million-year-old echinoderms, the author has a “how to” page meant just for you!

The second chapter covers over half of the book and is ladened with recipes by restaurant sushi chefs and clients from Los Angeles, San Francisco, San Diego, Portland and Japan – the majority of the chefs are Japanese immigrants, and a number have Michelin star backgrounds. Short bios of the contributing chefs are furnished. There are a variety of traditional Japanese recipes for Rice, Appetizers, Maki, Nigiri, Sashimi, Soups and Garnishes – all accompanied by detailed photos that picture the final dishes, should one need visual guides. Sakagami’s contributions to this chapter are his additions to the recipes: suggested variations, special notes on specific ingredients, and serving recommendations.

All measurements are written with both the U.S. Customary System and the International System of Units (metric measures). Each recipe includes serving size, ingredient list and step-by-step directions which are clearly written and easy to follow.

Sushi Master is Osakana Meister Sakagami’s mid-weight tome to his goal-driven life mission. Wrapped in a guidebook on sourcing, making and enjoying sushi, it is a timely approach highly appropriate to today’s extremely relevant environmental concerns.