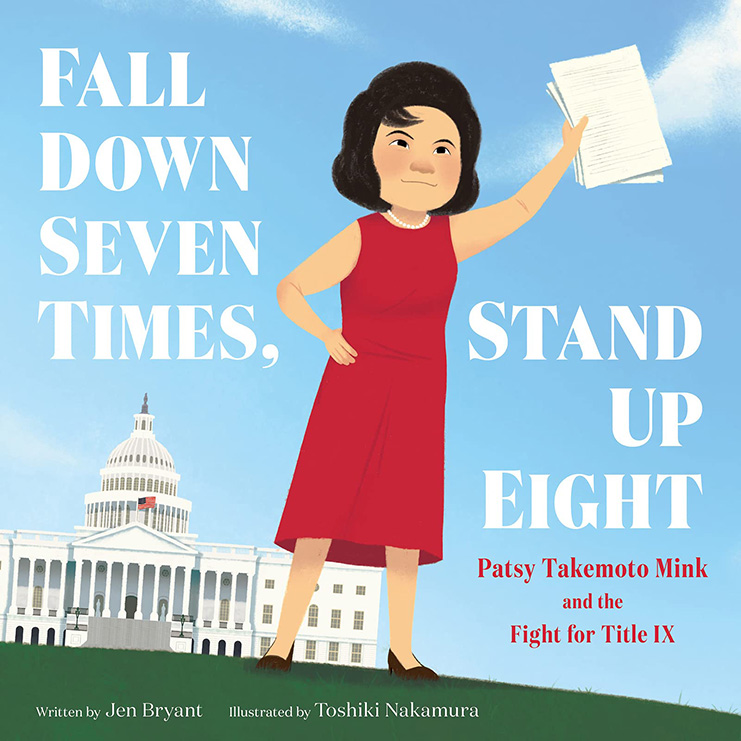 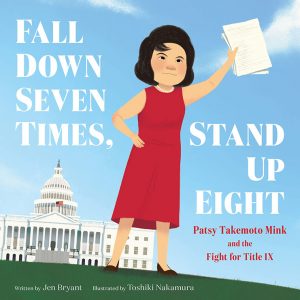 Fall Down Seven Times, Stand Up Eight: Patsy Takemoto Mink and the Fight for Title IX, by Jen Bryant and illustrated by Toshiki Nakamura, is a vivid children’s picture book that tells the inspiring story of Patsy Takemoto Mink, the first Asian American woman elected to Congress. The biography introduces children to politics through Patsy’s upbringing in a Japanese American household. She grew up with the generational immigrant mentality that a “better life” was always tied to higher education and paper diplomas. As she grew up and was rejected from all medical schools for her gender, she came to the realization that women would never be treated equally under current laws in the education system.

In face of all the obstacles she faced due to her gender and race, she never backed down and continued to push for change – eventually making her way into the Hawaii political space, then the House of Representatives. The Japanese proverb, “Fall down seven times, stand up eight,” is used rhythmically throughout the biography. We learn of this proverb through Patsy’s Daruma doll, which symbolizes perseverance and good luck in Japanese culture, and see it guide Patsy through her life and career.

The biography specifically focuses on Title IX, the law that requires federally funded education programs to treat boys and girls equally, which directly affects children attending federally funded public schools. This is a fantastic addition to the collection of children’s biographies, especially to Asian American girls who rarely encounter people who look just like them in picture books. It is especially impactful to see such a figure and read about Patsy Takemoto Mink’s fight for gender equality in the education system. Bryant and Nakamura have come together to deliver an important, yet easily digestible and aesthetically beautiful, message to children about perseverance. Despite the obstacles that one may face, the journey is not quite over yet. Fall down seven times, stand up eight.