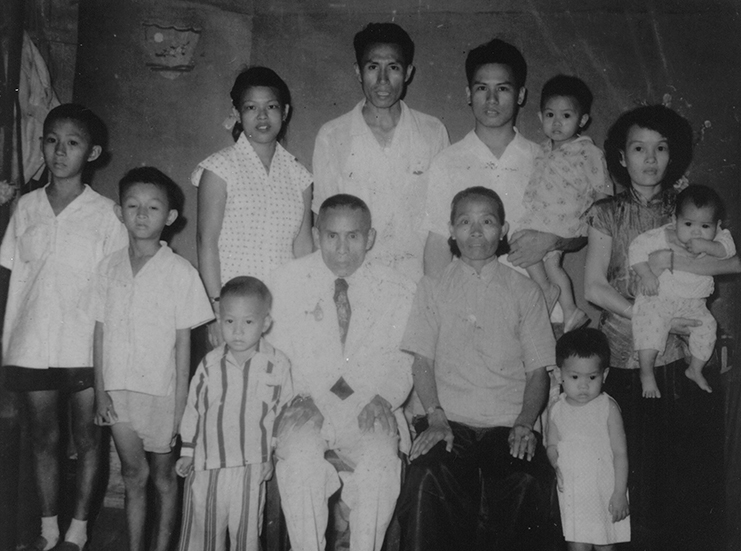 Tucked in the corner of a glass case is an old notebook on loan from one of the clinic’s interpreters, Yvone Ung. The cover is worn and the pages are yellowed. Both the book and owner have traveled a long journey.

When Ung initially came to the U.S. from Cambodia in 1987, she didn’t dare step out without a note around her neck. “My brother wrote, ‘I am lost’ on it, so I could always find my way home,” she said.

Ung likes to tell this story to the immigrants and refugees who rely on her for interpretation services. Fluent in five languages, Ung has worked for ICHS for nearly 20 years. Only recently, has she started to open up about the past. Sharing her story followed years of healing first.

“For the first 10 years, I couldn’t talk,” she said. “Every time I tell a story, I cry. I cannot sleep sometimes.”

Seeing her father’s notes as part of ICHS’s historical exhibit is a source of pride, even as it brings back painful memories. “We lived in Phnom Penh,” she said, describing her family’s upheaval as the Khmer Rouge came to power. “Suddenly, we lost everything.”

Ung and 18 family members were forced to flee to the mountains with no belongings. Just 17 years old, Ung was separated from her parents. She caught small animals for food and escaped forced farm labor by learning to weave reed mats from village elders.

Only eight people remained when she returned home three years later. A 50-pound bag of rice was all the family ate every month. They had no house and no money, so Ung started selling inexpensive toys at the market. Soon, she built a thriving business.

Ung also had a bigger ambition. “I read a lot of books about America,” she said. “Women can work. Women can drive. Why not go there and be free?”

Ung, a tiny, bespectacled lady with a wide smile, limps slightly because one of her legs is shorter than the other. Her parents worried she wouldn’t be strong enough for the journey. Naturally, she was undeterred.

Ung traded clothes with a coal seller to appear homeless and cut her hair to avoid unwanted attention. Just before dawn, she hid in a military jeep under a layer of rambutan fruit with six other people. Ung reached the Thailand border only after being abandoned by the group’s guides, a three-day walk without water and a final harrowing run for her life.

It would then take months for her to obtain permission to stay at the Red Cross Khaoidang refugee camp. Even then, Ung had to contend with nighttime raids from local bandits, who would prey on the camp’s residents. It was a big step when, two-and-a-half years later, she learned that she had qualified to go to English-language school in the Philippines and from there, onto the U.S.

She continued to study English and would often use her language skills to help other immigrants fill out forms and documents. With ICHS, as with so many other things in her life, she saw an opportunity.

“I first visited the ID Clinic when I had my son,” she said. “I told myself, ‘I want to work here.’”

She loves her job, she said, because it allows her to give back to the community. Like a favorite aunt, she doles out equal parts humor, pep talks and tough love. Many ICHS patients have known her for years. Her stories, once too painful to mention, flower to give others hope and reassurance. She has so many, she says. She hopes they can serve a purpose.

“I tell my patients, ‘I came here with just five dollars in my pocket,’” she said. “But, I got what I wanted. I want them to know to never give up.”

The ICHS historical exhibit was made possible by an $80,000 grant from Historic South Downtown. It traces the growth of ICHS through its 46-year-long history and is on permanent display within the first floor lobby of the ICHS Chinatown-International District Clinic located at 720 8th Avenue S.