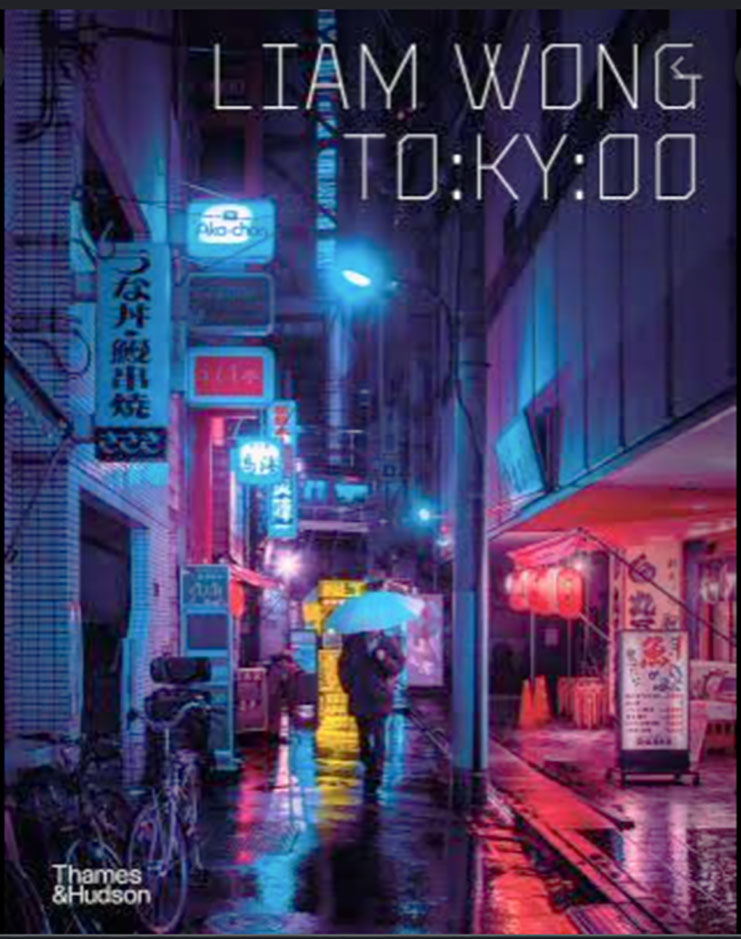 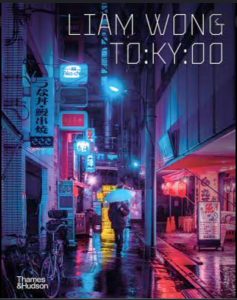 Award-winning art director, graphic designer, game developer and photographer, currently based in Japan, Liam Wong is not your typical book author.  Of mixed-race Scottish-Chinese heritage, he was born in 1987 and raised in Scotland. A self-described “quiet kid from Edinburgh,” Wong’s early years were not marked by exceptionality. He confessed, “In high school I was failing every subject except art.”

Taking a year off after high school, a major impact for Wong was time spent in his bedroom “playing games and watching movies…I went through mostly all of the top 250 films on iMDb” (an online database of information related to films, TV programs, home videos, video games and streaming content online).

Another key source of his development came from the community of artists. “I would spend a lot of time online making art as part of art groups and sharing it on DeviantArt (an online art community featuring over 350 million pieces of artwork, videography and photography connecting fellow artists and art enthusiasts). It sparked my interest in graphic design, web design and art in general.”

As a child he became interested in video games while watching his older brothers at play, creating related artwork as well. When the time came to consider a possibility for a future career, the Computer Arts Course at Albertay University in Dundee (a breeding ground for videogame development), struck his fancy. During his final year there, along with some friends he made his first game, Color Coded, as part of the school’s annual Dare to be Digital competition. A significant success, the game was nominated for two BAFTA’s (British Academy Film Awards). Wong recalled, “I never thought I’d have a career in video games until I made my first one.”

In 2010, he graduated with a BA in Computer Arts. He credits his Creative Skillset accreditation and the university’s Centre for Excellence for the games courses that provided him with growth as an artist, as well as helping him to identify his areas of passion.

Within two years of graduation, at age 25 he moved to Montreal, Canada, becoming the youngest art director at Ubisoft, one of the largest, premiere gaming studios in the world. His job for six years, where he became recognized for his work, was to define, design and direct the visual look for the company’s AAA large-scale videogames, like Far Cry, Assassin’s Creed, Homefront, Watch Dogs, Crysis, Child of Light and Rainbow Six.

In 2017, Wong was picked for the new Forbes 30 Under 30 list, which recognizes the brightest young international entrepreneurs, breakout talents and change makers.

While working at Ubisoft, Wong traveled across the world for company events. Initial visits to London and Paris created awareness of “how each city (had) a different feeling, often dictated by its architecture.” He used his phone to capture photos of his travels to create a “visual diary” of his trips. In 2014, on a 10-day press tour of Japan, his first visit there, the dense architecture of Tokyo so inspired him that he was compelled to return a year later for an extended month-long stay.

With his graphic design background, he knew he had an artistic eye and could compose an image, but he soon realized that “all I knew about the camera was how to press the shutter button.” He purchased his first DSLR (digital single-lens reflex camera) Canon 5D Mark III and began to learn the ins-and-outs of how to use his pricey new purchase.

Wong soon discovered, “It wasn’t immediately obvious to me that my artistic background could cross over with my photography. As soon as I made the connection, I was filled with so many ideas and no longer felt limited by what I thought photography was supposed to be.”

On his second trip in late 2015, the start of his Tokyo Nights series led him through various wards of Tokyo. Shibuya at midnight was the first exploratory experience of his photo journeys. The brightly glowing, electrified tubes of neon light in the major commercial/financial center captivated him. “I got lost in the beauty of Tokyo at night,” he said. “It was like living in the cyberpunk world.” Drunkard’s Alley, with its “Rows of tiny bars. . . dating back to the early 1950s, contrast with the modern architecture . . . above and around it.” Shinbashi, the salaryman quarter of the city, was another favorite destination for night photography with its “neons reflecting off the pavement, creating amazing light refractions.” Wong soon discovered, “With so many unique districts, the beauty of Tokyo is that you can enjoy the huge contrasts between modernity and tradition.”

Taking photos became an instructive means he used to develop the fledgling photographer within him, building his skills and self-confidence nightly.  He noted “…photography has taught me to bide my time …with patience a shot will eventually present itself.” Wong thought back on his photo of a man and woman holding their umbrellas. “I took this picture on Valentine’s Day: a couple walking through Shinjuku in the rain.” He identified what made the image a success: “…the verticality of it, the scale of the figures in comparison to the scene and how the composition is balanced through the harmony of the elements, right down to the straight lines and umbrellas… ” and concluded, “I recall feeling that I had captured something with a little more substance and that all the time spent in the rain was worthwhile.”

Each night during his holiday, Wong recorded the images of the people and streets of Tokyo after midnight and began posting his photos on social media. The outcome resulted in a string of serendipitous events. His haunting, neon-lit shots soon earned him a devoted following. He shared the photos on his Facebook Page, and friends soon encouraged him to continue to shoot and share.

“When Adobe and the Saatchi Gallery posted (a photo of a taxi driver waiting outside a Love Hotel) things went wild,” Wong exclaimed. “Suddenly my work was being viewed by thousands of people… It made me want to practice more to master the technical side of photography rather than just relying on the camera’s automatic settings.” His photos were promptly acknowledged and approved by commercial corporations of clout: Business Insider, Canon, CNN, Smithsonian and BBC.

“Video games shaped the way I view the world through a lens. Photography has become a way for me to express myself,” Wong has stated. In 2019, he released his debut monograph and best-selling book, TO:KY:OO, capturing the beauty of Japan’s capital city after dark. It became the largest crowdfunded book in the United Kingdom, raising four times its intended target.

The publication, focused on the city he grew to love, came with brief commentaries regarding the photos: revealing his thoughts and technical processes, the intentions of what he was after, the end results. It is an instructional manual for anyone seeking to learn about the art and techniques of the photographer. “I shot this image at a wide-angle on my 24-70mm lens,” he writes regarding a narrow alley, “for its capability to capture a scene’s verticality and overwhelming scale.”

Specializing in night photography, Wong works with the special challenges of low-light photography – seeking a “strong light source” wherever he looks through his viewfinder to snap a worthy photo. “. . . lighting is key,” he asserts, “I am always on the lookout for light and illumination and how they interact with their surroundings… I look for reflections, shadows, natural and artificial lighting, and I try to frame them to make the most striking image.” Addressing specific photo techniques, he advises, “The most effective photographic moods can be enhanced and communicated through experimentation with color and textures. Sometimes moving a few steps closer can result in a more interesting perspective.”

Wong uses a mix of Adobe programs (Lightroom, Photoshop, After-Effects) and camera options (color balance, gels, remote flashes) to achieve the “polished, refined style” he’s become known for creating. “Strong silhouettes and restricted color palettes…the kind of treatment seen in films with the composition techniques of old black-and-white photographers” are also high on his photo formulas. “When it comes to photography,” he claims, “for me it’s really about capturing moments.  When you pick up a camera you are channeling all of your inspirations and sensibilities…that move and excite you.” He continues, “When I wander the streets I am often looking for ways in which subjects overlap, particularly through lines and geometry – this is one of the simplest things you can base your composition around.”

Color, contrast and composition play a key role in the imagery of TO:KY:OO. Wong ends the book by sharing his photographic creative processes and techniques regarding general Elements of Style, Color, and Composition, and his personal guidelines for the book: Making: Mood, Tokyo Glitch, and Neo Tokyo.

Too small for a “coffee table book” but larger than life in its origination and execution, Liam Wong’s 264-page monograph, illustrated via a raft of evocative, aesthetic color photos has produced a unique exploratory concept of a first-class world city.  Using snippets of sage observations and succinct tutorial treatises he has created a photography “how-to” manual and guidebook which he chronicles in a concise bio-synopsis: “I take real moments and transform them into something surreal.”

Note: A quick peek at TO:KY:OO can be found on the following link: http://www.viewpure.com/7Bu92RQcWlo?start=0&end=0