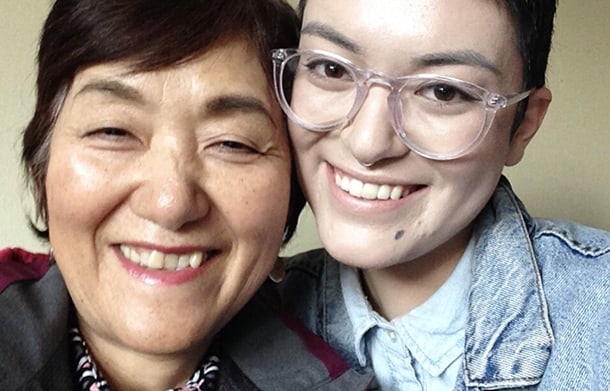 When I was little, the embrace of my mother’s arms was more than enough to stop the parade of tears down my chubby cheeks. Her gentle, sweet voice letting me know that everything was going to be okay, that mommy was here, filled me with a comfort as innocent as the Hello Kitty, Anpan Man, and Little Twin Stars toys in my childhood bedroom.

I loved my mother then like she was my entire world, because she was. In the early ‘90s in eastern Washington, there were no other Japanese people in our town. There were no sushi restaurants until I was in high school, and so whenever I asked for a tekka-don bowl for my birthday, my mother fetched frozen ahi tuna steaks from Fred Meyer to thaw in the kitchen sink. She massaged them with her bare hands until they were as tender as the love she carried for me, and I for her.

Outside of our family trips to Japan, my mother was the one person who not only taught us about our culture but imparted the way that we were supposed to carry ourselves as Japanese women – with a feminine, quiet grace and power.

I had a hard time doing either throughout my childhood and adolescence, and it came to a head when I was raped in my first year of college.

I developed debilitating anxiety, PTSD, and depression in the months that followed. My innocence and heart had been shattered, and I trembled with rage and impulsivity when my mother tried to touch me.

I hated myself for hurting her, for not knowing how to help her help me, and for the trauma and resulting mental illnesses that warped me into someone she didn’t know anymore.

Her suggestions of adjusting my diet, of meditating, of trying anything but to go onto medication – that she and my father believed would change me into someone I wasn’t – sent me deeper into a spiral of shame. Why couldn’t her suggestions work? Why didn’t it? How could the things that had been such a part of my life before not fix me now, and how could I tell her that she couldn’t help me?

I eventually begged my mother to let me get onto antidepressants because I feared that I would kill myself if I went without them for any longer. She cried. I started the next day.

With each pill, though, we eventually became closer as my brain chemistry adjusted to let her back in again.

There is no denial that the cultural differences between my Japanese mother and I played a large role in the story of my mental illness.

In Japan, the topics of mental illness and mental health are virtually nonexistent. My mother worked for 10 years in a Tokyo-based corporate office before coming to the States, and even with the intensity of Japanese professional culture and the consistent burn-out of her colleagues, there were no company-sponsored counselors.

During those 10 years, my mother lived alone, and when she struggled, often cried alone, too. She never told me if she defined it as depression, anxiety, or something else – “I just took care of myself, did what I needed to do, and went to work the next day.”

The idea that my sweet, beautiful mother was all alone in her pain broke my heart. It also showed me the pain that she wanted to protect me from – although vastly different – and that what she had used to heal herself were the same things that she tried to help me to do. It was never out of malice or denial of my mental illnesses, she simply never knew.

In the five years since the trauma that triggered my illnesses, my mother and I have become even closer – not only in our relationship, but in the understanding of what it means to be an intersectional, cross-cultural family.

My education in Cultural Ethnic Studies in college opened us up to discussing our family’s backgrounds as refugees and immigrants, and how the trauma of the forced migrations passed itself down. “What happened, happened” was no longer our family motto – it soon became “what happened, happened, and we need to talk about it and heal.”

I told my mother that I was writing this piece and asked her if she wanted to contribute her voice and perspective. Although she is self-conscious about her writing, her love for me and desire to reach out to other Asian and/or Asian American parents won out. Here is what she says:

1. Accept, listen and believe your child.
2. Educate yourself about mental illness.
3. Don’t jump in one conclusion/diagnosis.
4. Make sure the child doesn’t have any other physical illness because some symptoms are very similar from some other illnesses.
5. Make sure that the child knows she/he/they is loved and always have support from the family.
6. Don’t push and be patient.
7. Don’t force your way onto the child: medical treatments, therapies, etc.
8. RESPECT your child.

I read that list each and every time when I am feeling anxious, scared, or insecure over whether or not I am supported in my mental health journey. Mental illness is a manipulative, deceitful force that forces my mind to buckle under the weight of self-imposed guilt and shame, but I still stand because I know that I can fight back – and I am not alone.

I am not a child anymore, but I still love my mother in a way that breathes life into every space I occupy, even when she isn’t with me. It is because of her that I am in it, and it is because of the way she loves me now that I am still here today.

It was not without its struggle, but I did not struggle alone – she was always, always there, even when she didn’t understand, and became even more of a presence when she eventually did.

I love you, mom. Thank you for loving all of me.