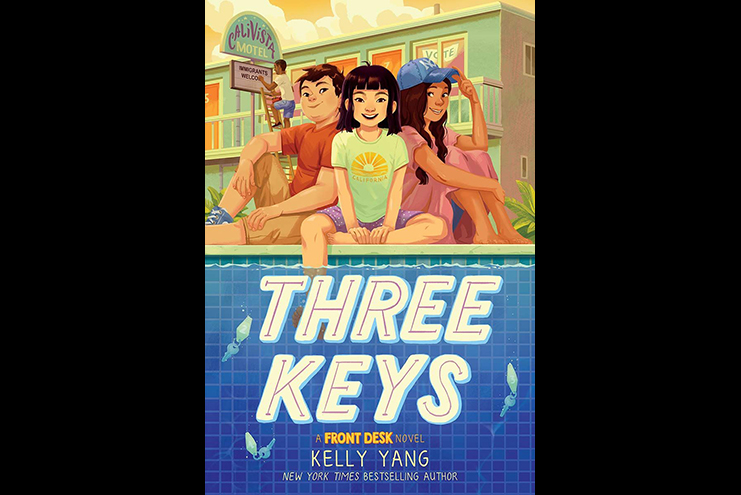 Three Keys, Kelly Yang’s Young Adult sequel to the award winning novel, Front Desk, tells an incredible story of resilience, friendship and standing up for what is right. Her novels are rich and inspiring, written with a belief that young people are capable of not only understanding issues facing their communities, but also becoming changemakers.

In her first novel, Yang focused on the story of Mia Tang and her family, who immigrated from China when Mia was young. The book follows their journey from working as cleaners in the Calavista Motel, to becoming proud owners. At the motel, Mia is surrounded by her family, “the weeklies” (a multiracial group of residents that live at the Calavista) and her friend Lupe who often comes by.

The sequel, Three Keys, tells the story of Mia and her friends, Lupe and Jason. They are sixth graders whose lives are shaped by a hostile political backdrop. It is 1994 and an anti-immigrant Governor Wilson is running for re-election advocating for Proposition 187, an initiative prohibiting undocumented immigrants access to social services including health care and public education. Anti-immigrant prejudice is running high in Anaheim, California where Mia, her family and friends live and contend with racism and injustice.

In this book, Mia’s best friend Lupe becomes a central character. Lupe’s family is from Mexico, and she and Mia are in the same class, where they stand up together against the prejudice and microaggressions they face in school from both their classmates and their ignorant teacher, Mrs. Welch. Lupe later discloses to Mia that her family is undocumented. When Lupe’s father is detained, her community comes together to support her and her best friend is there right by her side. Mia, along with Jason and the weeklies, do all they can to free Lupe’s father and make sure her family can be reunited. Together, they organize petitions, work with an immigration lawyer, write letters to politicians and newspapers, and attend a protest. Mia’s strong will and resourcefulness make the group an unstoppable force.

The novel is outstanding in its ability to touch on complexities and nuances in a way that is digestible and relatable to young people. It does not sugarcoat the struggles undocumented folks, immigrants, people of color, and women face. The book deals with difficult subjects, but through the eyes of an optimistic and resolute Mia who speaks up and stands up against the injustices in her world. Mia is an inspiring role model setting an example for young people, and really all people, to speak up and be changemakers in their own communities.

In reading the author’s note, I learned that the book was inspired by Yang’s own lived experience as a 10-year old when Proposition 187 passed. Governor Wilson served two terms in California and Proposition 187 was a real initiative that passed. It never fully took effect and was later declared unconstitutional, but the political climate which allowed for it to pass led to an increase in hate crimes, and fear in immigrant communities. Despite being set in 1994, the book is painfully relevant today.

Yet it is books like Three Keys that help do the important work of shifting thinking, opening readers’ minds to diverse experiences, and fostering empathy. The book features a few characters who themselves learn, grow and open their minds over the course of the story, highlighting the important truth that people indeed are capable of change.

This book brings me hope of a future like the one Mia Tang believes in and fights for. As an educator, this is a book I would be excited to share with students. Three Keys is a great jumping off point for young people, families, and even adults to discuss the injustices of our world today and what we as individuals can do within our own communities.