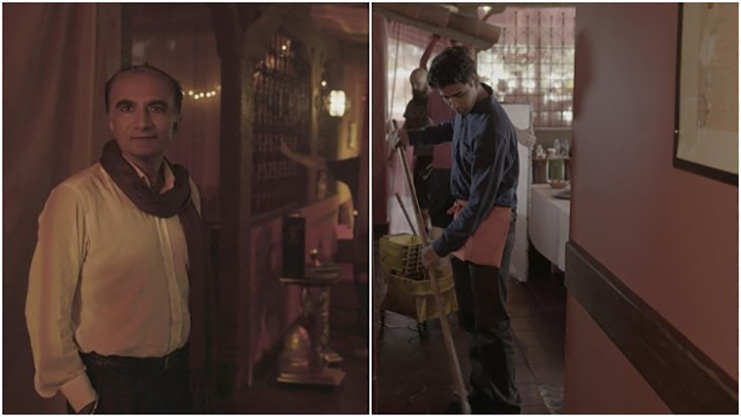 The shot at chasing one’s dream is universal, and for many of us embedded in our family history – maybe even the reason why some of us are in the United States today. In The Illegal, by Danish Renzu, the protagonist Hassan’s shot arrives when he is given the opportunity to study at one of the best film schools in the United States. He comes from a middle-class family in New Dehli, India, where he lives with his mother, sister, and father.

“There’s something about the streets of Dehli. Dreams – they got lost here. Visions – they don’t.”

Hassan (Life of Pi star Suraj Sharma) heartfully says goodbye to his family, ready to journey to the city where he can share his vision on camera and connect with the world. When he arrives in Los Angeles, he encounters financial and living hardships, unexpected to him and his family. He then serendipitously meets Babaji, a caring older man who works at an upscale Indian restaurant. Babaji introduces him to the owner of the restaurant, the haughty and hostile Mr. Khan. Though he has never had a restaurant job before, Hassan is able to get an under the table job and a bed in the worker’s apartment from his new boss.

The routine of attending film school during the day and working at night becomes harder and harder for Hassan to balance, but he has no other choice. There are bills and tuition to pay, and dreams that he has to fulfill – why else would one leave their family, comfort, and familiarity for a country of infinite unknowns? Renzu explores the meaning of this sacrifice through rich storylines and characters, like beloved Babaji and Hassan. These two characters intertwine their stories as Hassain looks to Babaji for mentorship, while Babaji looks to Hassain for hope. Babaji, an immigrant of 25 years, and Hassan, an immigrant of not even one year, learn to struggle together through parallel conflicts. With two very different personalities, Renzu shows tenderfly how one is needed to understand the other.

Hassan’s knack of understanding the people around him extends to the viewer’s ability to empathize with the variety of different characters in his life. From his compassionate sister who wants the absolute best for Hassan, to a love interest coming from a drastically different background, The Illegal weaves in and out of these and other narratives to show that sometimes people are simply victims of circumstance. What we are and perhaps who we are, are in a way controlled by where we come from. Determination and strength unpromisingly challenge the unruly tides of fate.

The Illegal is a beautiful film, showing the range of emotions that exist within the human condition. This was Renzu’s message: the lives of the undocumented are as human as anyone else. He does this with the help of Hassan’s self-narration, which poetically cuts through hopeful and heavy scenes. The film is heart wrenching, and when the viewer is able to fully step into Hassan’s shoes (especially towards the end) they could only wonder: what would they do?

After watching this film I am left with this overarching question: is the American Dream still possible? I am sure it manifests differently in this current day. Although The Illegal offers no solid answers, it provides a flicker of hope in the end. If not the American Dream, maybe it is the stories that are embedded within every undocumented worker, every “illegal”, that fuel the motivation to be in this country. The Illegal is just one of these stories.

The Illegal will be showing at the Northwest Film Forum as part of SAAFF on Saturday, February 22, 2020, at 6:30 PM. You can buy tickets www.saaff.org.