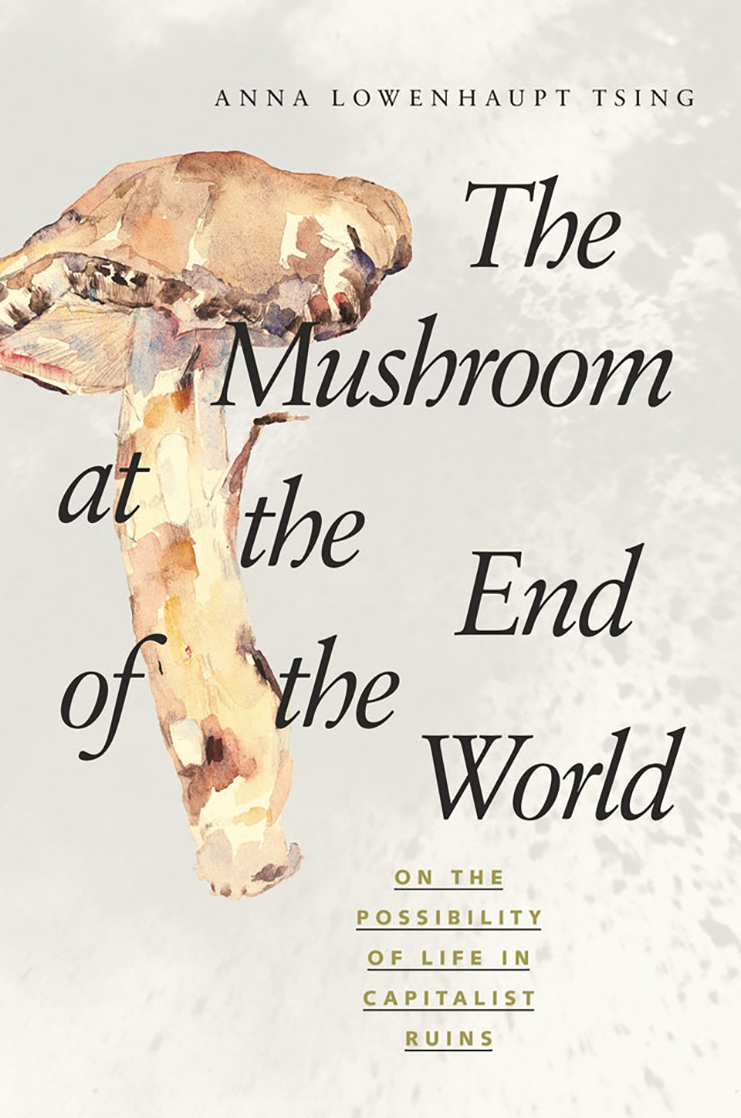 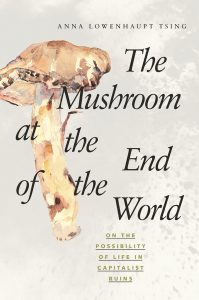 In 2015, U.C. Santa Cruz anthropology professor Anna Lowenhaupt Tsing wrote The Mushroom at the End of the World: On the Possibility of Life in Capitalist Ruins. Not her first, nor to-be-sure her last book. To her credit she has also penned, among others: Friction: An Ethnography of Global Connection (2004) and In the Realm of the Diamond Queen: Marginality in an Out-Of-The-Way Place (1993).

With a B.A. from Yale and M.A./Ph.D from Stanford, Tsing’s scholarly works have been highly lauded and lavished with numerous awards, including: a Guggenheim Fellowship (2010); the Society for Humanistic Anthropology Victor Turner Book Prize in Ethnographic Writing (2016); the Society for Cultural Anthropology Gregory Bateson Prize (2016) – he, a former husband of cultural anthropologist Margaret Mead; the Royal Anthropological Institute Huxley Memorial Medal (2018); and the lollapalooza prize of all – a Niels Bohr Professorship at Aarhus University in Aarhus, Denmark.

Before turning up collective noses at this seemingly obscure educational institution and its lofty recognition for Tsing’s “contribution to interdisciplinary work in the fields of humanities, natural sciences, social sciences and the arts”, know this: Aarhus University (the second largest research university in Denmark) also anointed the 68-year-old scholar with the directorship of the university’s AURA (Aurus University Research on the Anthropocene) Project and presented her with an eye-popping sum of FIVE million dollars! Impressed, now? I was.

What in Samantha Hill (an equity opportunity exclamation) is going on here? Mushrooms? MUSHROOMS?!! Aside from their preordained place on steaks and in omelets, I draw a blinking blank with regard to their worth. So, sue me.

Legend has it that after the bombing of Hiroshima during WWII, the first living thing to emerge from the devastated land was a mushroom: the Matsutake (pine) mushroom, which grows in forests across the northern hemisphere. Considered a special delicacy, according to the American Mushroom Institute, Matsutake (rare and highly valued) is the third most expensive edible mushroom in the world, and can command, depending on size and condition, an astronomical $1,000 – $2,000 per pound.

A mushroom is the reproductive organ of a fungus. Described by some as the most “poorly understood and underappreciated kingdom of life on earth,” it is also recognized, by those in-the-know, as “indispensable to the health of the planet.” What we have come to know as a “mushroom” is just the portion that appears above the ground in which it grows. But the majority of the fungal organism exists below ground in the form of mycelia – white cobweb-like filaments (hyphae) that weave their way through the soil, creating a vast neurological network beneath the earth, interacting with the roots of trees, and forming combined structures of fungus and root called mycorrhiza. Mycorrhizal webs connect not just root and fungus, but also — by way of fungal filaments – unite trees with surrounding trees, creating immense forest entanglements. This seemingly boundless matrix links many species over enormous distances. So far-reaching is this system, that it forms the largest organism on earth. The Honey fungus mushroom’s complex web, for example, is 2.4 miles wide.

Likened to a “fungal iceberg”, the mushroom’s enormous subterranean structure, concealed within the earth, are largely ignored. Attention is given, instead, to its more visual stem, cap and gills, the parts of the mushroom that appear above ground. According to mycologists (mushroom scientists), much can be learned regarding continuing life on earth through judicious attention paid to the secretive undercover life of mushrooms. Unfortunately, more energy is paid on culinary examinations of the upper part of the mushroom, concentrating on how best to devour a fungal dish: roasted, grilled, baked or fried? Tsing’s probing study seeks to reverse this direction.

Fungal mycelia play a critical role on planet earth. By secreting enzymes into the soil around them, they digest organic material (including rocks), absorbing and releasing nutrients in the process. The discharged nutrients become available for trees and other plants, which are then used to produce more food for themselves and the network. The rampantly migrating web navigates maze-like territory in search of food. Not only does it feed and link trees in forests (root to root), but it also conveys information regarding environmental threats to the woodland trees.

Mycelia also play a critical role in forming soils, recycling organic matter, and keeping plants and animals in good health. Devoid of mushrooms, the earth would be, mycologists claim, “a vast, uninhabitable waste heap of dead, undecomposed plants and animals”.

Tsing’s ethnographic account of the Matsutake’s complex commodity chain contributes to the field of anthropology in her study of multi-species’ collaborative interactions using a non-human subject to learn more about the Homo sapien world. In addition, her research relative to the field of ecology addresses the interrelationship of organisms and how their environment is re-shaped by human interference. Tsing’s monograph delivers a clear message that contrasts the mushroom’s interactions within the earth – synergetic, reciprocal and nurturing — with those of humans on earth — mindless destructive acts of pollution, ruination and exploitation.

“Making worlds,” states Tsing, “is not limited to humans.” The Mushroom at the End of the World is a treatise based on observations of the hidden underground life of the mushroom. From its little known but remarkable pattern of growth and beneficial contributions, to its global culinary commercial star power, the author advances theoretical ideas regarding how the biology and life of mushrooms can be used to revise our current adulation of a long-reigning socioeconomic industrial complex whose pursuit of its own capitalistic profit motives have led to the overall detriment of societal needs and the planet on which we live. Tsing postulates that the humble mushroom provides a key to unlocking how humans might better their lives and the planet by taking note of mushroom behavior and adopting some of its ways.

Anna Lowenhaupt Tsing will talk about the history of the matsutake mushroom and her book, The Mushroom at the End of the World when she delivers the Solomon Katz Distinguished Lecture on Feb. 25, 2020 at 7 PM at Kane Hall 220 on the Seattle campus of the University of Washington. Presented by the Simpson Center For The Humanities. For details, go to uwalum.com/golectures or call 206-543-0540.