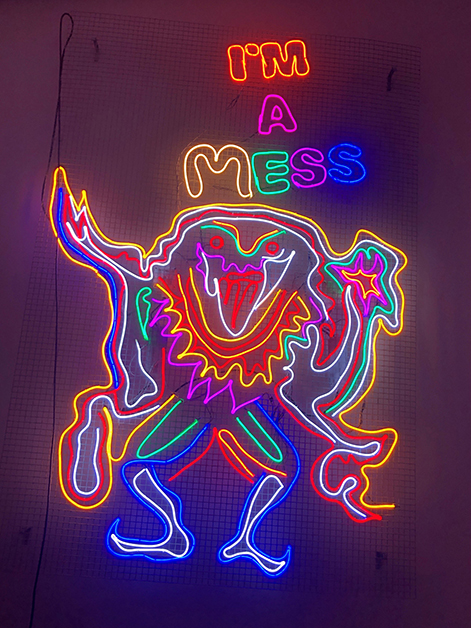 “My work is about reclaiming the image of Asian women, moving away from the object of the defining gaze, towards a position where I/Asian woman become the subject of display.

The human body is the leitmotif in Embodied Change: South Asian Art Across Time, an exhibition organized by Natalia Di Pietrantonio, assistant curator of South Asian art, Seattle Asian Art Museum. The female form specifically, is the connecting thread interrogating the autonomy over female/minoritized bodies, disrupting gender and patriarchal stereotypes, advocating for self-representation, and contemplating the shifting social movements of our time.

Our entry into the exhibit is Chila Kumari Singh Burman’s mixed media installation, Kali (I’m a Mess) (2020). Here, we are confronted by the bright neon colors of Kali, the Hindu goddess of protection and destruction. Burman grapples with the social and political anxieties of 2020, envisioning the goddess in all her luminous glory as the channel for change. The physical positioning of the artwork is intentional, speaking to the concern of access, of who gets to see the work and who doesn’t. The installation can be seen from outside the lush green lawns of SAAM, through the large windows that provide an unobstructed view, replicating the placement of the same work over the entrance of Tate Britain (Nov 2020- Jan 2021) in a purposeful push toward accessibility.

The exhibit is divided into three sections and the first gallery contains Chitra Ganesh’s video installation, Before the War (2022). The concept of Kali continues here with Ganesh reimagining the goddess as an affective futuristic embodiment, in a calculated shift away from the traditional depictions seen in South Asian historical and mythological imagery. The juxtaposition of the historical (votive female figures from the Indus Valley Civilization, 2600–1900 BCE) and futuristic forms situates us in an interesting conversation. Ganesh’s Kali wears a gas mask in her avatar as a modern warrior; she exists in a visionary cosmos amidst floating bodies, heavenly gardens, falling monuments, and recalibrated forms. We are witnessing an aspirational South Asianfuturism, dreaming of a world without war and human suffering.

We move from the pulsating, psychedelic works of Burman and Ganesh into the somber, muted gray tones of the next gallery, Making Space. The subdued palette is symbolic of the serious issues these artists are questioning in their individual arts practice. Helmets (Adeela Suleman), and corsets, armor, and clothing (Naiza Khan) – all accouterments of the body, challenge the autonomy and safety of the female body in public spaces. Can/does this material layering shield the female body from the male gaze? Or is it a way to stifle the freedom of self? An invisibilizing rather than a protection?

Other works in this gallery include Pakistani (and Seattle based artist), Humaira Abid’s exquisitely crafted, Sacred Games (2020), a comment on violence within and towards religion. The suitcase can be interpreted as a metaphor for shifting geographies and migration, whether through choice, circumstance, or compulsion.

Bani Abidi’s Death at a 30 Degree Angle (2012), the other video installation in the exhibit is situated inside a connecting room off the main gallery. The sounds emanating from within the darkened interior pique the viewer’s curiosity to enter the space. This immersive experience is about monuments and monumentality, of men posturing pompously, proclaiming their self-created myth as God like figures. It is a commentary on who gets included in the annals of history and who is erased. The work aligns with the falling monuments (a nod to Black Lives Matter movement) in Ganesh’s Before the War (2022).

Embodied Change marks a significant shift by collectively presenting South Asian diasporic artists, challenging the notion of containing artists within their own geographical borders. It also dislodges the positioning of India as the cultural nucleus for all of South Asia. It speaks to the fluidity and the permeability of borders, reiterating the place of the artist as a global citizen. Partha Mitter, Parul Dave Mukherji, and Rakhee Balaram astutely note in their encyclopedic book, 20th Century Indian Art (Thomas Hudson 2020) “Today, artists in Pakistan, India, Sri Lanka, Bangladesh, Myanmar, and Nepal practice in an increasingly globalizing world, with more possibility of a trans-regional dialogue among them, despite inter-regional frictions”.

The final gallery is demarcated into Historical Images, Contemporary Goddesses, and Portraits – an interesting contrast of the past and a (re)imagining of the future. It aligns historical and mythological goddesses on one end and is disrupted by an atypical visualization of the goddess imagery on the other. The Devi as the personification of the female form is seen in the exhibit’s detailed and delicate miniature paintings; she is benign in her embodiment as Sita, the goddess of fertility, as Saraswati, the goddess of wisdom and the arts, but can transform quickly into the powerful and fierce Kali/Durga. The works highlight this duality of the goddess in her various nuanced configurations.

Benguluru based artist, Pushpamala N., and the Mithila artists (primarily women) perform a necessary intervention in compelling us to rethink the concept of Who/What is a Goddess? Pushpamala explores the tension between the “real” and the artifice through the medium of photography. She forces us to look at the illusion of the form, of public access, consumption, and normalization of feminine imagery through mass circulation. This mediation alludes to the vast reach of calendar art in India, popularized by the oleographs of Raja Ravi Varma (1848-1906).

The Mithila artists, whose works here are juxtaposed with Pushpamala’s, are often abrogated and siloed within the parameters of gender, caste, and class. The artists in the show overcame great personal challenges to assert their professional accomplishments. Their work is displayed alongside revered South Asian miniatures from the 15th, 16th and 17th centuries, and contemporary artists – B. Prabha, Chila Kumari Singh Burman, Rekha Rodwittiya, and Mithu Sen, who are (re)evaluating the representation of the “ideal” female body. The Mithila artists use coded vernacular visual language to affirm the legibility of their arts practice in a manner that is empowering and deliberately disrupting.

For Natalia Di Pietrantonio, mounting this show was, “important for [the viewer] to walk away with a greater understanding of South Asian art, to think of South Asia as local and global, [and] as an important part of our community”. She “chose the theme [of the body] because it is permeable and malleable, a physical form but also disruptive, and blending the two made it all come together”.