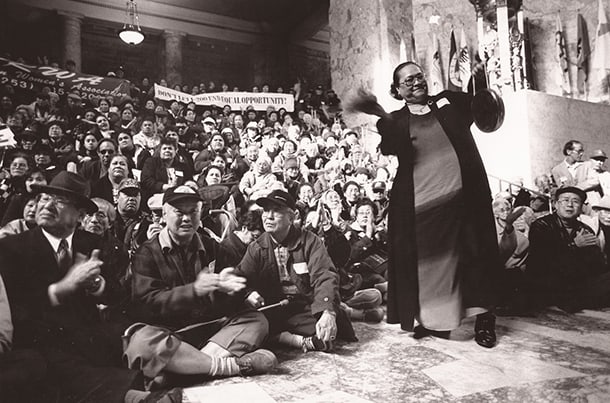 Akemi Matsumoto recalls her grandmother, who came to the United States from Japan when she was 18 years old. She worked hard, paid taxes, and raised 12 children alone after the death of her husband. Even so, it took 50 years and passage of the Immigration and Nationality Act in 1952 before she could vote. “She was classified as an “alien, ineligible for citizenship,” Matsumoto said.

It is a lesson Matsumoto does not allow herself to forget.

“I register and encourage others to vote every election in honor of her, Chiyo Yamane Morishige, my bachan,” said Matsumoto, who is an active member of the API community and a board member at Asian Pacific Islander Americans for Civic Engagement Votes.

With the ability to organize, Asian Americans and other minorities represent a powerful voice, able to demand action and legislation that represent their interests.

“Getting our community members to speak up, act, and support each other is the game changer for health equity,” said Teresita Batayola, CEO at International Community Health Services (ICHS). “We saw this recently when hundreds of thousands across the country saved Obamacare, or the Affordable Care Act, when they called, emailed, and met with Congressional leaders. Many more demonstrated to emphasize how Obamacare saved lives.”

Batayola continued, “That was powerful because elected officials realized fully that they are accountable to voters for policies and programs that improve the health of our communities.”

The Asian American, Pacific Islander, and Native Hawaiian voter bloc is expected to double to 12.2 million by 2040, according to a 2015 report from the UCLA Center for the Study of Inequality and Asian Pacific American Institute for Congressional Studies. In 2013, only 60% of eligible Asian Americans voters were registered. Obstacles include a lack of language assistance and outreach from political parties, and voter ID laws that discourage minorities.

Kay Nelson, program coordinator at Interim Community Development Association, notes, “Information about current events, local or national, aren’t or haven’t been as accessible to some as they are for others, so people don’t feel included and engaged in political processes.”

“There are so many city policies and laws that affect our community—and we want to have a voice in that,” emphasizes Jamie Lee, director of community initiatives at Seattle Chinatown International District Preservation and Development Authority. “We not only want the residents of the Chinatown-International District to understand the issues that could change their lives, but also have a say in the outcome.”

“There is great power in knowing that my voice can influence policy, services and who gets elected,” said Tagoipah Mathno, ICHS foundation development specialist. She is Cham American and active within her community. “I look back at history and how much people have sacrificed just to exercise this right so those who are able can vote today. I do not believe in leaving it up to chance to get the right resources to our community. We need to be involved in the process.”

As local resident Rachta Dahn commented, “The International District is a special community where the repercussions of anything, good or bad, that happens in Seattle is felt and magnified. People will continue to tell us what we want rather than listening to us tell them what we want if we don’t show up and vote.”