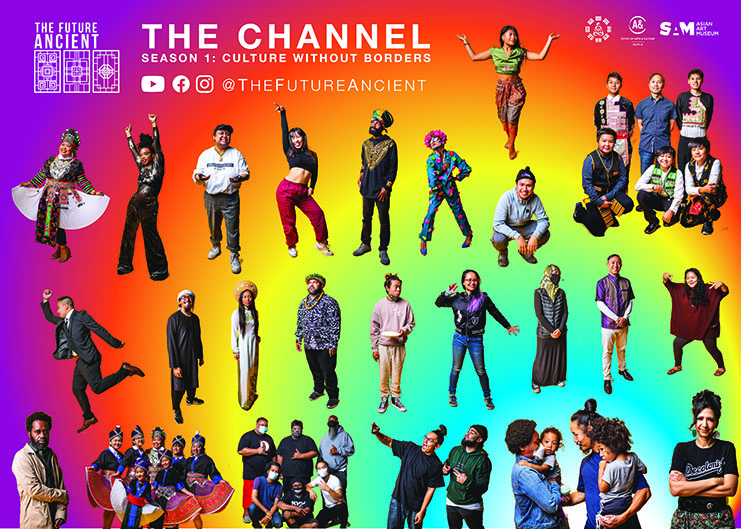 This autumn, the Seattle Asian Art Museum has hosted a series of art and cultural variety shows, led by Che Sehyun and featuring dozens of local and international artists, cultural workers, community organizers, and performances. Entitled The Future Ancient, the episodes have aired live on Saturdays during October and November on  Facebook and The Future Ancient website.

According to Sehyun, The Future Ancient developed from numerous roots. “The Future Ancient was the natural evolution of the more recent public art, the G’ma Project,” Sehyun said, “which honors our elders, culture, and ancestors in the modern world by gathering ten BIPOC artists and sharing stories of our grandmothers and our way of honoring our cultural inheritance.”

If the impetus of the Future Ancient project arose out of celebrating the older generation, it draws its name, in contrast, from the younger one. “I have to give a shout out to legendary hip-hop artist, DJ Kamikaze, who was the first person I had heard the phrase ‘Future Ancient’ from,” Sehyun said, “back when I was volunteering and running life-skills and hip-hop youth programs in partnership with the Massive Monkees.”

When the COVID-19 pandemic hit, Sehyun pivoted alongside the Seattle Asian Art Museum toward virtual platforms. “Season 1: Culture without Borders is an eight-episode season exploring more marginalized and less visible Asian and Pacifica communities,” he described, “as well as Black Lives Matter and Indigenous Life Matters episodes that help us understand our differences and our overwhelming similarities, and create spaces of inspired connection and lasting unity.”

Sehyun’s vision for The Future Ancient resonated with dozens of artists who have participated in the project over the past few months, including visual artist and writer Yoona Lee. “As an artist and antiracist activist, I was immediately drawn to the purpose of The Future Ancient, with its focus on public art and strategic community investment,” Lee said. “As a way of offsetting the damage of Trump’s horrific presidency, it was clear that we need to double-down on working toward collective liberation.”

The Future Ancient also resonated with Lee because of its emphasis on cultural heritage and social transformation. “I was working toward understanding the struggles of my Korean ancestors, many of whom were freedom fighters, and trying to figure out how to carry their fire into the future,” she said, while serving as a writer, editor, and advisor to the Future Ancient team.

Meanwhile, photographer Tony Cow was drawn to the community-oriented aspect of The Future Ancient. “I spend so much time by myself photographing the world and wanted to see other people’s vision and contribute to their goals,” Cow said. “I saw that this was a great platform to showcase people in our community.”

Graphic designer Tony Chan felt the same when he heard about Sehyun’s work from a mutual friend.  “I wanted to find a way to reach out to my fellow people of color and build,” Chan said. “I called Che and we talked about my ideas and my mission to help others. Turned out he had the same plan and he already got something going on. Teamed up with him and now we’re here.”

Another graphic designer who contributed to The Future Ancient was Vivian Mak, who was also energized by its optimism. “It was only natural to be interested in The Future Ancient, where it was people-driven and wanting to uplift unrepresented voices in a way that honors who they are and how they create, no matter the medium,” Mak said.  “This inspiration carried over from a mural project in International District, a time when tensions were high, special in a sense that we could collectively pour ourselves into something that seemed to create a sense of hope and resilience.”

Connection, despite the pandemic, has been a strong element for many of the artists. “With this opportunity, I’ve learned that there are a lot of people around that are just like me, young and old, people from unique backgrounds that are trying to lift the community up,” Chan said. “Not only did we share our history and passion, but we embraced each other at the same time.”

Chan’s favorite weekly meetings were also Cow’s. “There are little things like the Monday check-ins where we talk to everyone and let them know where we are at in life and just listen,” he said. “I truly appreciate everyone who is a part of this group because it seems like we are building more than a team. Sometimes it’s nice to hear that we are not alone.”

Lee too has learned how essential community is for Black, Indigenous, and people of color. “Even a Zoom call imparts a sense of warmth and solidarity,” she said. “We’re in this together, and when we combine our minds and talents, we can produce something of beauty and meaning, both in and for the community.”

Mak concurred, expressing a sentiment often heard among community members during this year’s pandemic and racial justice protests: “We can only depend on our community and lean on each other through times like these.”

For Sehyun, The Future Ancient is both individual and global. “This project is the culmination of my life’s work as a multi-media artist,” he said, “my own reclamation and reconnection with my own Indigenous Corean roots, as well as the purpose, message, and hope of my artist life for the world.”

Primary among those hopes are both inclusion and equity. “My goals for this project are to uplift, inspire, and build real community and healthy relationships around our shared but diverse cultural values,” he said, “and offer a platform and framework that centers our cultural futures and collective liberation.”

And Yoona Lee believes The Future Ancient should only be the beginning. “Conversations, creativity, and community are key to overcoming the isolation and oppression of these unprecedented historical times,” Lee said.  “It’s a model that can and should be perpetuated to create solidarity and, ultimately, social change.”