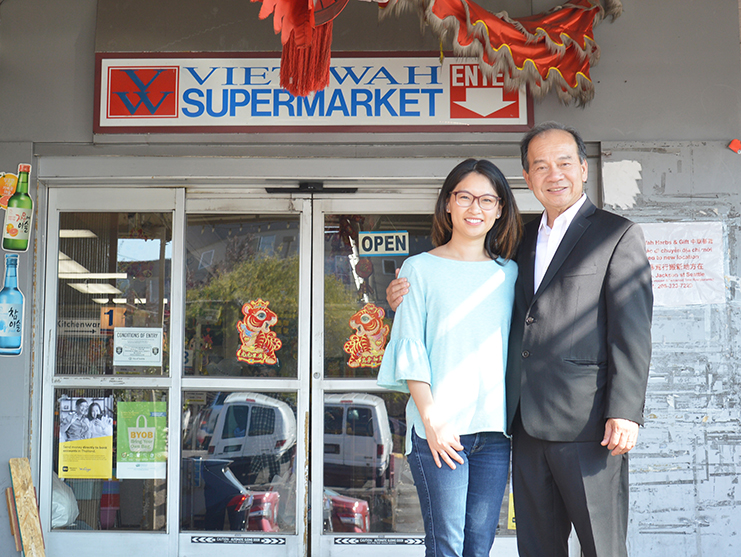 Some goodbyes are harder than others. For many, this one was heart-wrenching.
On Friday, September 30, 2022, the Viet-Wah Supermarket, an anchor of Seattle’s Southeast Asian refugee and immigrant population for 41 years, closed its 15,000-square-foot flagship store at 1032 South Jackson Street.

At the very end, the store was packed, nearly shoulder to shoulder, with loyal customers who came to say farewell to store employees and to fill shopping carts with favorite nostalgic treats: packaged noodles, fruity drinks and savory snacks. They walked down familiar crowded aisles, bantered with other customers and snapped keepsake pictures with their phones. Many were reluctant to leave.

“I’m at a loss for words,” Quynh Pham said, tears welling in her eyes. “It doesn’t feel real to me until I stepped into the store. It’s like, ‘Oh, my God!’ The sadness is starting to set in. You can’t replace businesses that have built relationships in communities like this.”

Pham, executive director of Friends of Little Saigon (FLS), recalled shopping at Viet-Wah with her grandmother and parents every weekend since childhood. Her favorite treat was haw flakes. Now, when FLS hosts community meetings, Quynh returns to purchase sweet crackers and snack food. The store employed her late uncle, who immigrated to Seattle not speaking any English.

Da Nguyen, who came with his sister, said he had been visiting the store with his family since he was eight. His most precious childhood memory was seeing his grandfather come every Saturday to buy lottery tickets, hoping to strike it rich. Da lamented changes in the neighborhood. “I always thought Viet-Wah was going to be here forever, even when I get older,” he said, sadness in his voice.

The Viet-Wah Supermarket was started in 1981 by Duc Tran, a refugee from Vietnam who arrived in Seattle in 1976.

In 1978, Tran worked at Chinese Information and Service Center. In 1979, he joined the Church Council of Greater Seattle’s refugee resettlement program. He was stationed at Sea-Tac Airport, helping interpret for new arrivals and processing their paperwork. These encounters convinced him of the need to start an Southeast Asian grocery.

Leeching Tran, Duc Tran’s daughter and vice-president of Viet-Wah, said, “We started the business when everyone from Southeast Asia was new to this country. In a way, the store and the community have grown together. We established ourselves together.”

The store opened daily from 9 a.m. to 7 p.m. Tran worked nearly 24 hours. On Friday nights, he drove a van to San Francisco to pick up produce, then drove straight back, only pausing to sleep at a rest stop. “That’s the way we start,” he said. “Pretty difficult.”

The store was an instant success, he said. “We were growing very fast,” he said. He borrowed $300,000 from the Hongkong and Shanghai Bank, allowing him to remodel a vacant furniture store near 10th Avenue and South Jackson Street. The 15,000-square-foot space provided ample room not only for the grocery store, but for other services as well. Tran’s sister set up a travel agency, Tran’s brother opened a gift shop, and another brother ran a small restaurant. Although the Viet-Wah lost money in the first two years., “in the third year, it took off,” Tran said.

In recent years though, the Viet-Wah has fallen victim to changing Seattle demographics, rising crime, the pandemic and an employee shortage.

Quynh Pham said the challenges faced by Little Saigon have been exacerbated by the lack of a strong residential base and the relocation of the Vietnamese Martyrs Parish from Seattle to Tukwila.

Earlier this year, property owner Dennis Chinn publicly announced his desire to sell the store and adjoining property to developer Mill Creek Residential Trust. The developer’s plan—presented to the International Special Review District Board in February—is to build two seven-story apartment buildings, retail and parking on the site. Groundbreaking is tentatively scheduled for next fall.

Leeching Tran was just two when the Viet-Wah opened at its current location. She recalled running around the store, climbing over large sacks of rice and going in the back to play video games with her two brothers. Her family ate dinner at 9 pm after the store closed. They went to bed at 11 or midnight, resulting in occasional late school arrivals. As Leeching got older, she and her brothers helped bag groceries, cashier and count the till at the end of the day.

In 2009, after attending the University of Washington and earning degrees in business and biology, she returned to work full-time in her family business. Her father elevated her to vice-president. Leeching said she quickly understand the meaning of “getting thrown into the deep end.”

“I had to learn a lot on the fly,” she said, laughing.

Leeching and her father agree that the key to the success of the business over the years has been understanding their specific clientele. “Customers tell us what they want and we find it and stock it,” she said.

Duc Tran said he frequently travels to Southeast Asia. There, he consults with food manufacturers, teaching them how to prepare products that resonate with consumers. His extensive knowledge of food and cooking guides him. “We are always the pioneers,” he said. “Then other people copy.”

Leeching noted, for example, that in recent years, the store has stocked its shelves with new brands of instant noodles made in Vietnam. The store has a small area which attracts a very loyal Indonesian clientele.

She said the hardest time for the Viet-Wah has been the past few years during the pandemic. According to Tran, shoplifters have become more aggressive. “They taunt us, ‘Oh, go ahead and call the police.’”

The migration to the suburbs has also resulted in a steady drop in business. “The population is aging,” she said. “They are not making big meals. My generation isn’t cooking as much as people once did.”

The store’s closure “was a long time coming,” she said. Still, the decision to close has been hard. “My aunt and uncle were here every day,” she said. ”Seeing customers say goodbye is hard.”

Leeching said some employees will move to the Viet-Wah store in Renton. That location has grown and prospered since opening in 2006. She said the store on Jackson Street will close to walk-in customers, but will continue to supply nearby restaurants.
Will Viet-Wah return to Little Saigon one day?

“We’d like to restart,” Leeching said. “We’ve been planning for several years. But we have to find the right location. I don’t think the store is going to exist in the same form, not this size anyway. The physical location is closing, but I feel like we’re not going anywhere.”
Duc Tran said the Viet-Wah has outgrown its humble mom-and-pop origin. He said it can no longer compete with smaller family-run businesses which offer lower prices. The store is now “one level up.” “Customer service and product quality” are now critical, he said.

Leeching said she has been overwhelmed by the outpouring of love from the community. “It’s really touching to know that our business has affected people in this way because you think, ‘It’s just a grocery store.’ But food is so important to our lives.” Food affirms tradition, culture and a sense of belonging, she said. “It’s really powerful.”

Her father, now 68, said he has mixed emotions. He said he was “happy and sad.” With the rising crime, he was grateful that nothing bad happened to any of his employees before it closed. But he was also sad because of the warm memories and the expressions of affection from customers he regards as “family.”

“I really miss seeing people,” he said. “Miss seeing all those customers and friends.”

Thu-Van Nguyen, a longtime customer who lives near Seattle University, lingered to talk to Viet-Wah employees. “This is my place,” she said. “This is where I shop. I told my kids—I said, ‘Guess what? The store is closing!’ I said, ‘Oh my God! What’s going on in Seattle? Everything is closing. Borracchini’s and Bartell, Viet-Wah. So we’ll see you in Renton sometime.’”