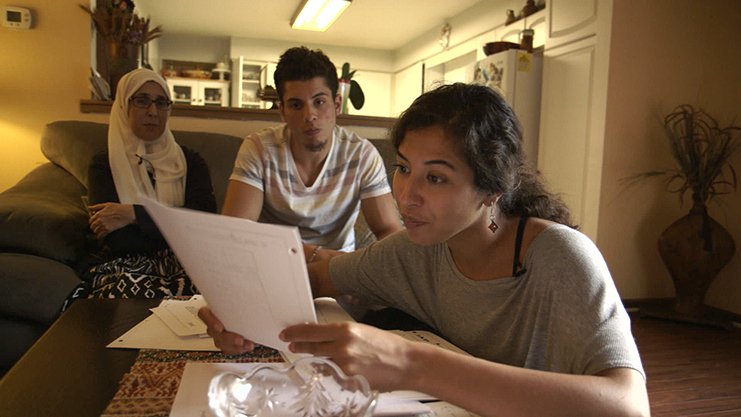 Imagine growing up in a small minority community where government surveillance is an accepted part of life. How would you act, knowing that wherever you are and whatever you are doing, someone may be watching or listening? How would you feel, seeing the same car that belongs to no one you know parked nearby wherever you go? What would you do if you constantly saw people sifting through your trash?

If you saw suspicious activity like that for 10 years, what sort of toll would that have on your psyche, your thoughts and your behavior? The experience is not unlike living under a police state.

Assia Boundaoui grew up in such an environment. Having reported at outlets such as the BBC, VICE and NPR, she returned to her hometown of Bridgeview, Illinois, to tackle the subject of government surveillance and its toll on society. In her debut documentary, The Feeling of Being Watched, she investigates the suspicions people in her Arab Muslim community had about the FBI since the early ’90s.

“The line between what’s real and what’s not is really blurry in the place that I grew up,” narrates Boundaoui, “and that grey area between paranoia and the truth is a dangerous place.”

Living under surveillance has had a profound effect on Boundaoui’s sense of self. Since she was 10, Boundaoui was aware of the ugly perception Americans had about Arab Muslims through cartoons, movies and shows. The way she sees herself and the way others see her always conflict with one another, and to this day, she struggles with her American identity.

Four years in the making, The Feeling of Being Watched premiered in the 2018 Tribeca Film Festival and had its international premiere at the Hot Docs Canadian International Documentary Festival that same year.

It will be making its way to Seattle and will be shown at Northwest Film Forum from May 17-19. Boundaoui will be present at the screenings on May 18, and the Council on American-Islamic Relations will also be hosting panel discussions for certain showtimes.

To get a better understanding of Boundaoui’s story, it is important to know about three things: Operation Vulgar Betrayal, Robert Wright and Muhammad Salah.

The ’90s was a decade rife with major terrorist activity. There was the World Trade Center bombing in 1993, the Oklahoma City bombing in 1995, and the al-Qaeda attack on U.S. embassies in Kenya and Tanzania in 1998. The decade was also a precursor to 9/11.

Robert Wright is the FBI agent who was assigned to the Chicago division’s International Terrorist Squad in 1993. He spearheaded a racketeering investigation known as Operation Vulgar Betrayal around 1995 to see if money was being funneled into terrorist organizations such as Hamas and Hezbollah through Muslim charities and organizations.

The operation fell apart soon after Wright got demoted in 1999 due to accusations of sexual harassment and religious discrimination, the latter coming from a fellow agent named Gamal Abdel-Hafiz. Since 2002, Wright has publicly accused and blamed the FBI for 9/11. Although Wright was reinstated to the terrorism unit, he has run into several problems with the FBI due to his outspoken criticism and has been subject to several FBI investigations.

Muhammad Hamid Khalil Salah was one of the men Wright investigated. Salah used to be Boundaoui’s upstairs neighbor. He was a grocer, car salesman and a father to five children. He was an American citizen since the 1970s.

The Israeli government evicted over 400 suspected Hamas supporters from the West Bank to South Lebanon in 1992. The Mosque Foundation, a local mosque in Bridgeview, sent Salah the following year on a humanitarian mission to help the displaced victims, giving him over $90,000 in assets to aid them. Salah was detained by Israeli police at a Gaza checkpoint and was held in suspicion of being a Hamas supporter.

The Israeli police detained him for nearly two years. His lawyers say he was tortured, and it was under these conditions that he was coerced to sign a confession, written in a language he did not understand. In January 1995, he pleaded guilty before an Israeli military court and carried out a five-year sentence that included his detainment.

Within that same month, President Bill Clinton issued Executive Order 12947, which prohibited financial transactions with any person or group labelled as a “Specially Designated Terrorist.” When the U.S. Secretary of the Treasury added Salah to this list six months later, he became the first American residing in the U.S. to be labelled an SDT. Consequently, his assets were frozen and his family was put under economic sanctions.

After Salah returned to Bridgeview in 1997, Wright’s investigations led to the government seizure the following year of $1.4 million in assets connected with Salah and a nonprofit called the Quranic Literacy Institute. These assets included an $820,000 loan from Yassin Kadi, a known Saudi businessman and Osama bin Laden supporter. Charged with racketeering in 2004, Salah was acquitted in 2007. He sued the U.S. government in 2012 to remove his SDT status and won. He passed away in 2016 at the age of 62.

The Feeling of Being Watched

Boundaoui starts researching and finds out about Robert Wright and Operation Vulgar Betrayal. She soon stumbles upon a website that contains hundreds of declassified FBI documents connected to Boundaoui’s life in Bridgeview. Intrigued, she convinces the rest of her family to sign a privacy waiver that she would submit to the FBI, allowing her to request unredacted documents that had their names.

Using the Freedom of Information Act, she requests the unreleased documents on her family. Although she hits roadblocks concerning these requests, the FOIA request for Vulgar Betrayal found 33,120 results. She also gets informed by the Department of Justice that 500 of these files are on people from Bridgeview, which motivates her to galvanize her whole community to sign privacy waivers. Boundaoui soon receives a call from the FBI FOIA office, informing her that any request that surpasses 8,000 pages takes a median of 998 days to process. Incredulous and suspecting an ulterior motive for the delay, she hires a lawyer to sue the FBI and the DOJ to expedite the process.

During this journey, Boundaoui tries to encourage her community, especially older generations, to become active and vocal about their rights. Although people, such as her mother, are on board, others are slow or resistant to change out of fear. The gravity and possible ramifications of Boundaoui’s investigations soon become evident when she receives a message from Google saying, “Government-backed attackers may be trying to steal your password.” Her mother also leaves her a message to tell her she received a visit from Robert Wright.

Instead of answering questions, The Feeling of Being Watched only seems to create more. In that sense, Boundaoui’s film is an ongoing project that may last for the rest of her life. This chilling movie is a reminder that citizenship is not the ultimate guarantor of protection, even from one’s own country, and that silence and invisibility are not always the best method of enhancing survival.

Boundouai cannot come up with conclusive evidence that the surveillance has ended, but she is resolute about keeping checks and balances on her government by making it clear that it, too, is being watched. Boundaoui encourages the audience to empower itself and keep unwanted eyes at bay through the education of one’s rights and the willingness to be vocal when these rights are trampled.

For tickets and showtimes, visit nwfilmforum.org.