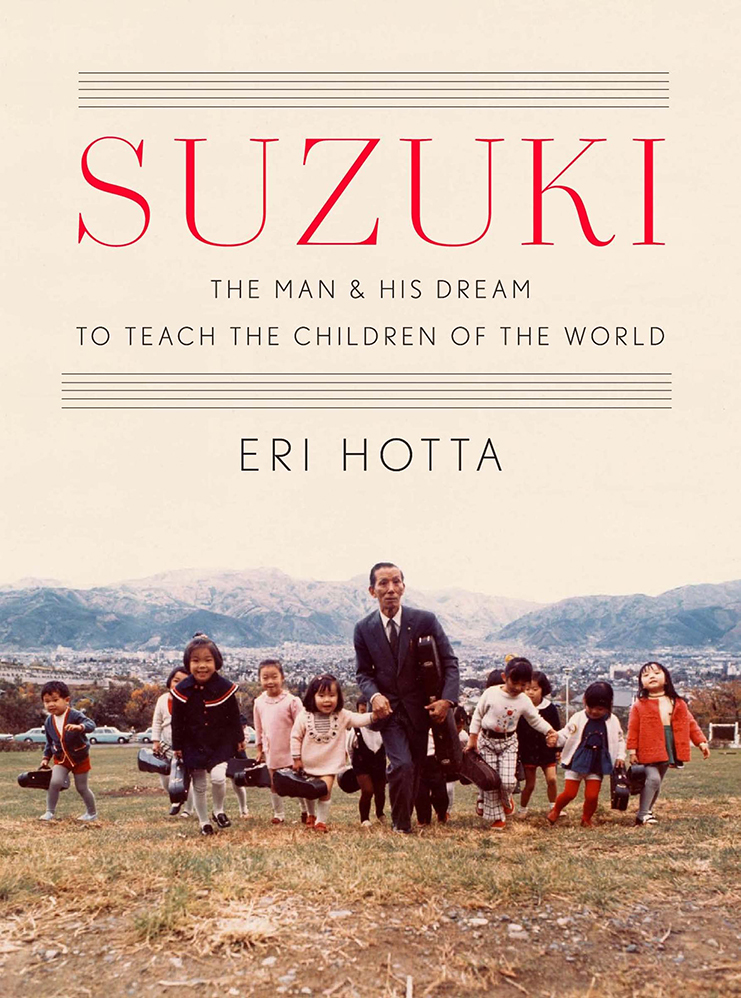 To make music is to be human. Regardless of age, ethnicity, gender, or ability, all of us experience that tingling rush of antigravity that only lives in song melodies and drum beats. To make music is also a rite of passage. Regardless of volition, aptitude, and sometimes pleasure, many of us have had fraction-sized violins pushed under our chins or been set, legs swinging, on towering piano benches. We may have even evolved from last generation’s victims to this generation’s perpetrators. In short, ”well-rounded” children must study music.

The name “Shinichi Suzuki” may raise several images in the minds of those of us who’ve been, um, fortunate enough to take violin lessons using the aptly named Suzuki Method. Baby violins, literally 1/16th the size of a regular instrument and striped with tapes marking where to place each finger, come to mind. Then there are the group classes – perhaps a dozen four-year-old’s attempting to play “Twinkle, Twinkle Little Star” in unison. And don’t forget the toddlers. Two-and-three-year-old’s, too young to use their own instrument safely, can “practice” by listening to recording of simple songs and using cardboard replicas. “Madness or brilliance” is the likely response from anyone who sticks their head in a Suzuki classroom on a random day. For what good are these unusual hacks apart from what they produce? Eri Hotta gives us a detailed, enthusiastic biography of a multitalented educator whose name lives on but whose method is largely forgotten. Suzuki didn’t enjoy squeaky violins any more than we do today. He just knew how to use them.

It’s no surprise to learn that Shinichi Suzuki’s father, Masakichi, was a luthier. Masakichi originally crafted shamisen, traditional, three-stringed Japanese instruments. But one day in the late 1880’s he fortuitously glimpsed a violin, still almost unheard of in rapidly modernizing Japan. Masakichi begged the owner for permission to examine the instrument, then returned to his workshop and recreated his own instrument by memory. The instrument might have been crude by Western standards, but Masakichi was determined. His commitment to excellence and his knack for business opportunities positioned him as Japan’s main violin maker when classical music became the rage a decade later.

Of course Shinichi Suzuki grew up around violins, we might counter. That’s the main focus of Suzuki education in the United States. Actually, he didn’t touch a violin until he was seventeen. Eri Hotta’s hook makes for eye-opening, endearing storytelling. Unlike so many of our pre- and elementary schoolers today, Shinichi picked up the instrument because he wanted to. He describes his almost spiritual experience listening to violinist Mischa Elman’s recording of Ave Maria: A ”dream-like melody” came with “soul-shaking sweetness.” Shinichi was being “wrapped around in velvety softness.” (52) Only then did he begin the love affair that would change the world.

One of the trademarks of Shinichi’s education theory, and sadly, one that is often overlooked, is talent education, or the idea that talent is related to nurture instead of nature. He would develop a complex theory and create an entire empire based on his ideals as an adult, but Hotta shows us that the seeds of his philosophy were germinating while he was still a schoolboy.

Shinichi attended the Commercial Academy, an all-boys public school in his hometown, whose aim was to prepare its students for the new business opportunities appearing in rapidly-Westernizing Japan at the turn of the twentieth century. He remembers the school’s emphasis on self-reflection and personal improvement rather than competition:

[H]e came to appreciate that the purpose of education is not the cultivation of specific skills, whether in mathematics or language or another discipline, but instead the development of morally upright individuals sensitive to each other and to all peoples as they struggled to live and grow together in a complex and interconnected world. (46)

Hotta’s book is not a philosophical treatise on music education, so we peer into more aspects of Shinichi’s life than pedagogy. From scales to bow techniques, Hotta “translates” elite vocabulary into words and word pictures we can all understand. She does an excellent job highlighting the “original” Suzuki method – and surmising how it might have devolved into the instruction that bears his name today. (As a violinist who grew up trying to avoid all things Suzuki, I was shocked to discover I might have enjoyed classes from the man himself.)

Shinichi’s life was so diverse and unpredictable that it’s hard to summarize the ninety-nine-year-old in one book. Hotta gives us snapshots of him (unsuccessfully) redesigning the entire Japanese school system, (successfully) teaching disabled children to play the violin, and dubiously examining young violinists Japanese press hailed as wunderkinder. She spends most of the book on his Talent Education Institute, which educates parents on how to foster their children’s potential – Shinichi felt “talent” made unfair presumptions – starting at birth.

Hotta’s pages turn quickly, for those of us who dread stuffy biographies. They might turn a bit too quickly at times: Every so often she’ll insert extraneous personal commentary, and she includes a final chapter devoted entirely to her personal experience with the violin. Hotta is a gifted writer and her stories are interesting, but the book might feel more stable as a pure biography or pure memoir. As it is, we’re left wondering why she wants us to know about her experience since she only takes violin lessons for one month the summer after high school. (Suzuki students begin at age three or four.)

But whether you like the extra detail or not, Suzuki is a readable, fascinating story about the man who believed everyone has potential. If you’re a parent or former student, Hotta’s careful research reveals the “why” behind all those years of tiny violins and endless “Twinkle Twinkle Little Star’s.”  If you’ve never been exposed to the Suzuki Method – or preschool violin lessons – this still makes for excellent reading. You’ll learn about the cultural, economic, and social revolutions of Japan over the last century, meet some unforgettable characters, listen to new music, maybe try a little violin yourself.  That’s what Shinichi would expect.