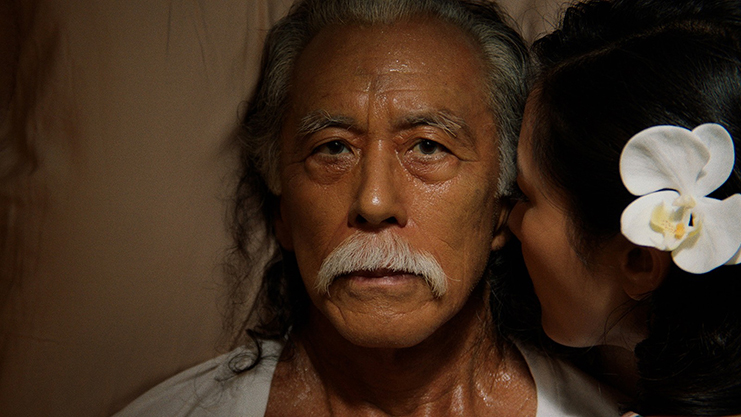 What does surrendering to death look like? For Masao Matsuyoshi, acceptance comes in the form of a ghost. When I first heard of Christopher Makoto Yogi’s I Was a Simple Man, I was instantly brought back to one of the first things I learned about Hawai’i, when my dad bought a book of “obake” (ghost) stories from a bookstore on the Big Island. There is a wealth of stories to be told about family, history, and the paranormal on the Hawaiian Islands, and so it is incredible to see Yogi set this film in his homeland.

I Was a Simple Man follows a man at the end stages of his life. In the beginning of the film, he finds out that he is fatally ill. Later, during a moment of vulnerability, he confides in a friend, saying that he is not ready. A bell rings, a dog barks, trees rustle in the night. A woman walks out from the trunk of an old tree. It is the ghost of Grace, Masao’s late wife, who takes it upon herself to prepare him for his final days.

Often in films, when a character learns they are dying, the news seems to start a countdown. There is a sense of running out of time. And while it’s true that Masao has a finite amount of time before the end of his life, multiple characters declare that “time moves differently” in Hawai’i. Instead, Masao spends his last days, with the help of the ghost of his late wife, being reacquainted with the past.

This film is not plot heavy. I Was a Simple Man might be categorized as slow cinema by some viewers and imitates the film’s declaration about time. There are lots of bold scenes of only landscapes and noises of the island. The cinematography is brilliant. It diverges so much from my own reality in winter in the Pacific Northwest. It looks like someone turned up the saturation. Greens are greener, the blues bluer, the whites crisp and clean. In daylight scenes, there is no angle that isn’t kissed by the sun, but night scenes also convey a vague sense of haunting.

The overall feeling of the movie is atmospheric, a Hawai’i where nature penetrates and perseveres through all the new tourist developments, and similarly, a Hawai’i where the past always manages to resurface in surreal moments. It is altogether nostalgic, timeless, and out of time. Its flashbacks show us a vintage Hawai’i, pre-occupation and pre-statehood. In a flashback where Grace and Masao are young, Grace tells Masao of a dream she had of an unoccupied Hawai’i. In this dream many languages are spoken, she says. “But there’s no English.” Grace is proud of this dreamed up version of her homeland, though she later reminds Masao how he insisted on giving their children western names in order to better assimilate as Americans.

Masao’s only daughter Kati cares for him as he grows more ill. She doesn’t see the ghost of her mother sitting in the chair beside his bed. She admits that she resents her father. An obligate caretaker, she struggles with feeling close to him after a childhood where her father abandoned her and her brothers. After Grace died, Masao chose to drink and smoke. He became depressive and violent.

Dreams and memories become mixed. Flashbacks of a younger Grace wind up being prophetic and filled with otherworldly wisdom. Perhaps it is the mixed memories and thoughts of a dying man. But the film makes sure to note that prophecy isn’t out of the question either. It becomes hard to tell what is real and what isn’t. Grace’s ghost sits beside the bed where Masao lays dying while a younger Grace paints a painting of an eclipse. They speak to each other. They paint the picture of the eclipse together until they are finished. Soon, death will come for Masao, whether he is ready for it or not.

I Was A Simple Man screens twice daily at SIFF Film Center January 7 – 9, 2022, 305 Harrison St. inside of Seattle Center. For details, visit siff.net.