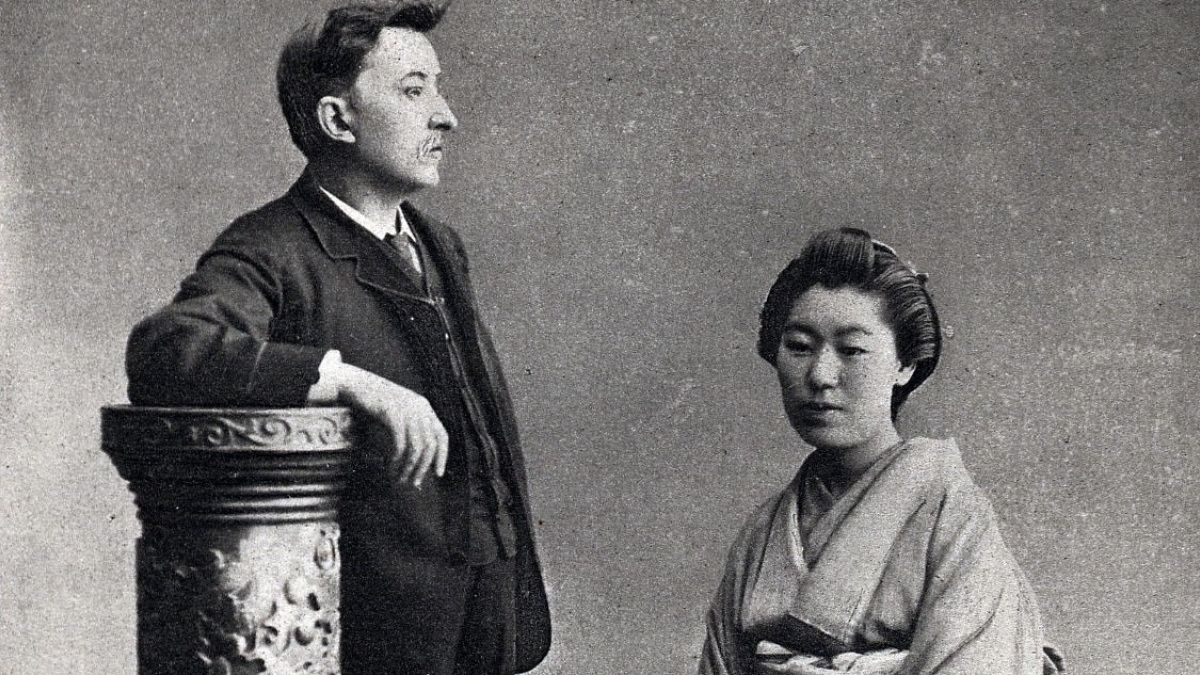 The life of and career of Lafcadio Hearn’s (1850-1904) are interesting and colorful. Known to many by his Japanese name, Yakumo Koizumi, he was a journalist, translator, educator and writer, and his works were widely read and influential in shaping Western views of Japan in the late 19th century.

Hearn’s life is as enigmatic as his stories. Hearn was born in 1850 on the Greek island of Levkas or Lefcadia, to Rosa Casssimati, the daughter of an old Ionian family, and Charles Bush Hearn, an Anglo-Irish officer in the British army. He was christened Patricio Lafcadio Tessima Carlos Hearn. Later Hearn wrote: “My father was attacked by my mother’s brother, terribly stabbed, and left for dead. He recovered and eloped with my mother.” Shortly afterward the army transferred Charles to the British West Indies and Hearn and Rosa went to Dublin to live with his father’s family.

In Dublin, Hearn’s mother’s mental state deteriorated, and she was sent back to Levkas, while Hearn became the ward of his Roman Catholic great aunt, Mrs. Brenane. Unable to take care of him, she promptly sent him abroad to Catholic schools, first to a seminary in France and then to St. Cuthbert’s College in northern England.

Hearn would now embark on a series of journeys. When his great aunt lost her money to a swindler, she sent him to live with a former maid living in London. Unhappy there, Hearn ran away and survived as best he could, often sleeping in stables. He returned to his great aunt, who then sent him off to Cincinnati to people she knew, but they wanted nothing to do with this “alien and grotesque” stranger.

They gave him five dollars and told him to leave. Hearn later wrote about this period of his life: “At nineteen years of age, before I had seen anything of the world except in a year of London among the common folk, I was dropped moneyless on the pavement of an American city to begin life. Often slept in the street, worked as a servant, waiter, printer, proofreader, hack-writer, gradually pulled myself up.”

Fortunately for him, Hearn attracted the attention of Henry Watkin, an English printer, who gave him a home and helped him find odd jobs as salesman, printer and copy editor. In 1872 he was hired as a reporter on the Cincinnati Enquirer and in 1875 went to work for the Cincinnati Commercial. His reporting won him a following, particularly his gruesome stories about crime and lurid events in the city.

At this time Hearn also began to translate contemporary French literature, including works by Flaubert and Maupassant. At the same time he married Alelthea ‘Mattie’ Foley, a young black woman who was born a slave. This was an affront to established convention and law, as marriage between the races was forbidden. Mattie was a talented storyteller, and this had attracted Hearn to her, but it soon became evident to both that the differences between them–racial, educational and economic–were too great.

They separated and Hearn, realizing the problems he would face if he stayed in Cincinnati, began another period of travel.

From 1877 to 1890, he traveled to New Orleans, Martinique and the West Indies. His writing during this time reflects his interest in social, economic and racial problems. Hearn was fascinated with the tropics. When he visited the New Orleans World Exposition in 1884 he met Ichizo Hatton, the representative in charge of the Japanese exhibit. This led Hearns visiting Japan.

For Hearn, Japan became the home he had never had. His contribution to our understanding of that country, through his teaching and writing, is not as widely known as it should be. Earl Miner, one of our preeminent scholars, wrote in The Japanese Tradition in British and American Literature, “There is scarcely another man in history who has become a sympathetic symbol to two different cultures.”

In spite of his deep affinity with Japan, Hearn’s initial impression of the country was not favorable. As in Cincinnati, he was able to find a “patron,” Basil Hall Chamberlain, a linguist and professor at Tokyo University. It was through Chamberlain that Hearn learned about Japanese literature and history.

Through Chamberlain also Hearn was able to secure a teaching position in Matsue, Shimane prefecture, about 450 miles southwest of Tokyo. He remained there for fifteen months, was accepted by the people, and married Setsuko Koizumi, the daughter of a samurai who had nursed him back to health when he was sick with an illness brought on by the extreme harsh weather. They remained married until his death in 1904 and had four children, three sons and a daughter. To avoid any legal complications that his foreign citizenship might have upon his wife and her family, Hearn became a naturalized Japanese citizen, adopting his wife’s family name, Koizumi, “Little Spring.” In 1896, he adopted his wife’s entire family, and at one time had thirteen people dependent on him.

After leaving Matsue because of its harsh climate, Hearn taught at the Government College at Kumanoto; worked on the Kobe Chronicle until his poor eyesight forced him to resign; and in 1896 accepted the chair of English Literature at the Imperial University of Tokyo, which he held until 1903. He died of a heart attack on September 26, 1904. He was honored with a Buddhist ceremony and his ashes were buried in Tokyo.

If Hearn is remembered today in Japan for his lectures on Western literature, he is probably best known today in the U.S. for his writings on Japan, especially his tales of the supernatural. Of the twenty books he wrote in his lifetime, twelve are about Japan. While he modestly insisted until the day he died that he knew very little about Japan, his writings convey to the Western mind much of Eastern culture, thought, and sensibility. He is still a popular figure in Japan, and thousands of tourists still visit the Lafcadio Hearn Memorial Museum, curated by his great grandson, Bon Koizumi, in Matsue. There are special collections of Hearniana in New Orleans, Cincinnati, Virginia and Harvard, as well as the Library of Congress. His tales are still read by Japanese schoolchildren. While he is no longer regarded as one of the major interpreters of Japan for the West, more and more critics and readers are beginning to recognize the importance of this fascinating and complex personality as an American translator, literary critic and author.