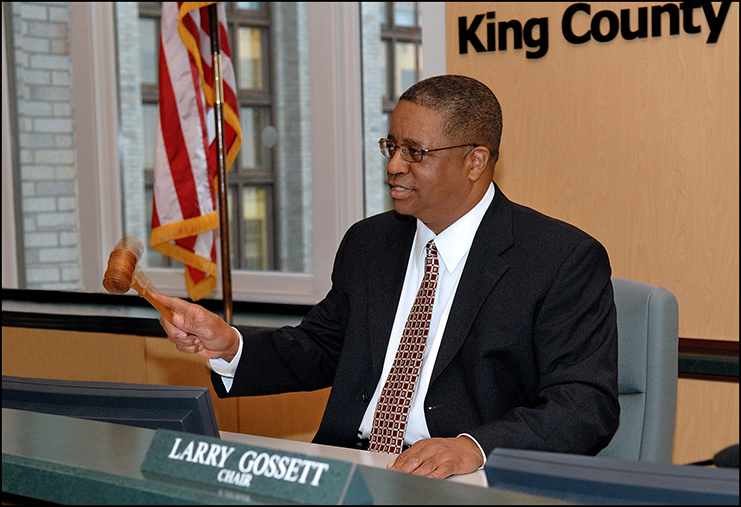 With the expiration of his last term on the King County Council, the curtain falls on Larry Gossett’s devotion to “serving the people”, a commitment served over 50 years, about half of which was an elected member of the King County Council. Larry Gossett played an important role in giving voice to the concerns of people and communities of color and shaping the history of Seattle’s Civil Rights Movement.

When Larry was young, his dreamed of making the pros in basketball. He thought his best path to success was going to junior college. His father thought otherwise. An admissions director told Larry and his father that if Larry enrolled in night school and completed one semester of geometry, he would be admitted as a freshman to the University of Washington in the fall. Larry didn’t want to go to night school. But Larry’s father told him, “That’s what the man said, then that’s what you are going to do.” Larry entered the University of Washington as a freshman in the fall of 1963.

As Larry entered the University of Washington, his life was going to be significantly changed. Basketball would lose its hold on him. The war in Vietnam was beginning to escalate. Circumstances on campus, in the streets of Seattle, and in the nation overall would raise his political awareness and call for his involvement in the flourishing civil rights movement… Larry didn’t think too much about the social or political implications of the war but he didn’t want to be drafted. He began exploring alternatives to the draft, seeking a legitimate deferment, and met a recruiter for the VISTA (Volunteers in Service to America) Program. He applied, was accepted, and entered the VISTA Program in the spring of 1966. He was assigned to work in Harlem.

Inspired by the words and actions of both Martin Luther King Jr. and Malcom X, Larry underwent a radicalization that was dramatic and deep. He grew a natural. He started wearing “shades.” He wore dashikis every day. He took the Muslim name of “Mohamed Aba Yoruba.” In 1967, when Larry’s VISTA service was completed, he returned to Seattle, where he felt he could bring the lessons about Black Power that he learned in Harlem back to make a difference in the black community. He had discovered the value of community organizing. He considered himself empowered and enlightened.

Across the nation, African American youth were coming together to form a “Black Power” movement. Black student unions were started throughout the country at colleges and universities such as at the University of Washington. It wasn’t enough to sit and wait for equality to happen, it was time to demand equality.

At Franklin High School, black students complained about unfair and unequal disciplinary actions. A phone call was made to the Black Student Union at the UW for help. Larry, along with Carl Miller and Aaron Dixon, went to the school to meet with students. A list of demands were drawn up. Larry led the group of angry students to present the list to the principal, vowing not to leave his office until the demands were addressed. The principal refused to discuss the list, and Larry and the students took control. Mediators were called and a resolution was worked out.

Nevertheless, on April 4, 1968, Larry was arrested for his role in the occupation of Franklin High School on the charge of criminal assembly. Later that day, as Larry sat in his jail cell, news broke out that Martin Luther King, Jr. had been murdered in Memphis. As tensions in the jail intensified, Larry called for peace and reflection, what Dr. King himself would want. Years later, ironically, Larry’s jail cell would be remodeled and replaced by the office he would use as a member of the King County Council.

As Larry’s reputation as a political activist grew, he expanded his focus beyond the college campus. During the 1970s, he supported the struggles of other communities of color as activists emerged for self-determination. He marched and demonstrated in support of the preservation of the International District, joined the occupation at Fort Lawton by Native Americans, and participated in the takeover of the old Beacon Hill Elementary School by Chicano activists. He joined labor activists like Tyree Scott to shut down construction projects which had excluded minorities from the trade unions.

In the summer of 1978, the Central Area Motivation Program (CAMP), the area’s primary anti-poverty African American social service agency, was in crisis mode. CAMP faced federal audits, possible criminal prosecutions, and loss of funds because of alleged mismanagement. The federal government took control over the agency. Larry answered the call for help. He became its executive director, cleaning up the mess he inherited, reestablishing CAMP’s reputation in serving the needs of the people of the Central Area.

In 1993, Larry decided to run for an open seat on the King County Council representing District 10, an area in Seattle stretching from the Montlake Cut to Beacon Hill. He faced two strong opponents, George Fleming, an African American former state senator and Barbara Stenson, a former news broadcaster. Larry prevailed. He was the Central Area’s favorite son. He had found his niche with no further aspirations for higher office. In 1999, 2003, 2007, 2011 and 2015, Gossett ran unopposed.

Throughout his tenure, Larry had strong ties to the API community. And among his strongest ties, if not the strongest tie, was his chief of staff, Cindy Domingo. And she was there for every step of Larry’s 25-year journey with the King County Council. When Larry’s last term was over, it also meant the end of Cindy’s service as well.

When Cindy first decided to join Larry’s staff, her first impression was “it pays well,” but didn’t think she would last long working for the government. Cindy was an activist, her experience was protesting against the evils and excesses of “the system.” It took a period of adjustment for Cindy to figure out her role. She was attracted to work for Larry because of a shared vision in social justice and a shared belief in the need for change. Many of the issues Larry prioritized were issues Cindy also felt were important — peace, labor, women’s issues, civil rights, immigrants, communities of color, human rights.

Cindy was proud of the support Larry provided for the API community. He was a reliable advocate for funding social services in the API community. To cite another example of Larry’s API support, Cindy mentioned Larry’s intervention in restoring a bus route for immigrants coming to ACRS after plans were made to eliminate the bus stop. He also protected the rights of immigrants and refugees, sorely needed, particularly in today’s era of intolerance. Larry took a stand against ICE (Immigration and Custom Enforcement) agents going after immigrants in jail, crafting a policy limiting the information ICE can collect on immigrant detainees within County detention facilities and outlawed ICE from flying detainees out of King County International Airport.

One accomplishment that Larry pointed to with pride was his role in changing the King County logo from an imperial crown to an image of Dr. Martin Luther King. King County itself was originally named for William Rufus DeVane King (1786-1853), a U.S. vice president, and also a slave owner. In 2007, the King County Council adopted the change, becoming the only governmental entity in the nation to have as its logo the likeness of Dr. King. With the change, there left no doubt who the County was named to honor.
In addition to the change of logo, Larry continued to honor Dr. King by co- chairing the annual Martin Luther King Jr celebration march held at Garfield High School.

On a smaller scale, Cindy saw they could give the people better access to what government could do right and empower people to act when government did wrong. She said that Larry would receive hundreds of letters and phone calls from people with problems, collect calls from inmates in prison asking for his help. More often than not, Larry did what he could. They called Larry because they knew he would, at least, listen.

As chief of staff, Cindy did the unglamorous, behind the scenes work — overseeing staff, representing Larry at council meetings and subcommittees, and attending to the budget. But she also found time to remain true to her political activism serving on the boards of local and national women’s, peace, labor and API organizations, and leading delegations to Cuba and China, speaking at conferences on women in Venezuela, Cuba, U.S. and Mexico. She also co-edited A Time to Rise: Collective Memoirs of the Union of Democratic Filipinos (UW Press 2017), a book which chronicles the history of the Union of Democratic Filipinos, and its role in the civil rights and antiwar movements in the United States and in the fight for democracy and national liberation in the Philippines. Cindy acknowledged that she could not have led such a double life as political activist and chief of staff for a county councilman without Larry’s support.

During one of the last county council meetings, Larry was praised by all of his colleagues, Democrat and Republican, for being the Council’s voice of social consciousness. Cindy pointed out that in all the years that Larry served, he stayed true to his principles—to advocate for the underrepresented and unrepresented, advocate for the welfare of inner-city youth, advocate for criminal justice reform. Looking back, Cindy felt that it is sad to be moving forward without Larry and Bruce Harrell as home grown African American political leaders who came of age during the civil rights movement, that this is the end of an era. The Central Area which first sent Larry to power and supported his re-elections has undeniably changed through gentrification.

Of the Gang of Four, Larry is the only surviving member. Who will fill the void of progressive leadership?