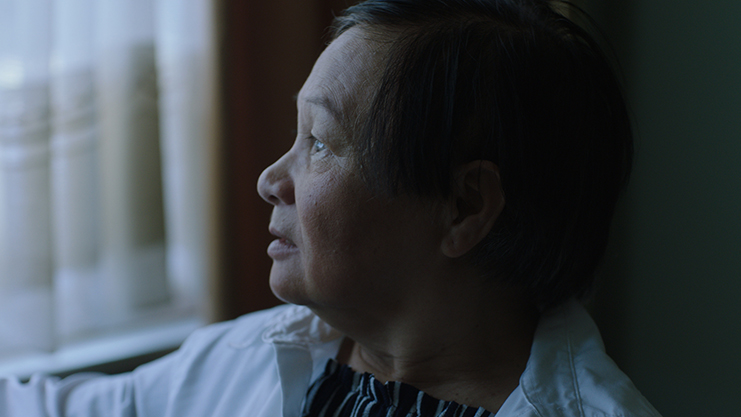 It is the twisted reality of care work that many domestic workers raise the children of other families in order to care for their own children from afar. Such is the reality of Maria, Esther and Mary Ann, the Filipina women interviewed in Kent Donguines’s KALINGA (CARE), who have been nannies and caregivers for anywhere between 13-27 years.

Esther Tabujara finds caregiving to be an interesting, challenging and dignified job, in spite of a large majority of society looking down on the vocation. She echoes an employer who once told her, “Don’t ever say that you are just a nanny. Without you, this house cannot run.”

Caregiving is a role that is very much needed, but positions are also extremely tenuous and without a lot of recourse if a caregiver is being exploited or abused. Filipino immigrants are the third largest and fastest growing immigrant population in British Columbia, and yet the vast majority of these women experience a precarious immigration status that is tied to their employer, which limits their rights as workers. What’s more, many of these women have made the difficult decision to support their families from afar, making meager wages in the West and then sending most of their earnings back home to the Philippines, where the North American dollar can stretch farther.

Mary Ann tears up as she talks about how difficult it is to be away from family, not being able to witness her child growing up and achieving milestones like other parents, not being able to get those years back, missing opportunities to form relationships or to be able to protect them from cruel and dangerous forces. “Sometimes I feel regret. If I could turn back time, I wouldn’t have left.” The next time she saw her son after leaving the Philippines, he was already 16 years old, and to him she was a stranger.

The picture could not appear more different from the employer’s perspective. Tina Burke, a Canadian woman with a family and business, sings the praises of her nanny, Maria. Meanwhile the documentary shows b-roll footage of Maria, a petite Filipina woman, hugging a six-foot tall white teenager and reminiscing with him about his childhood as though he is her own son. Tina extols Maria’s work for “going above and beyond” and insists upon a cliche that many of us are familiar with – that at this point Maria has become “part of the family.”

Is that truly the case, though? As the women discuss the end of their careers, they all agree that they have little means to be cared for by others in their advanced age. “Nobody will care for me,” Maria says. In spite of the kind words from her employer, the true nature of her role within the family cannot be made any more clear.

The truth is that things do not have to be this way, which makes the difficult decisions of these women not only tragic, but also infuriating. Filipino workers need to come here largely because their country has been underdeveloped by Western colonialism. There is no single way for an employer to treat their workers that will shield them from the structural cruelty of this fact. The Philippines’ labor export relationship with the U.S. and Canada is an inherently colonial program that rips labor from the country in exchange for the valuable North American dollar. It leaves families fractured and vulnerable back home, while families in Western countries get to thrive by having an extra nurse, housekeeper, mother, or administrator to anticipate and care for their needs.

The documentary only vaguely touches on these points, however. Kent Donguines’s film has chosen another ambitious aim: to make peace with the present reality, which he experienced as a young person, to help others see their experiences reflected in the struggles of Maria, Esther and Mary Ann. The film cuts repeatedly to a family gathering with at least a dozen people present and food that stretches across a long table. It is a warm and familiar sight for large Filipino families who are fortunate enough to have most everyone in one place.

KALINGA (CARE) is part of the 24th Annual Local Sightings Film Festival – A Celebration of Northwest Film & Media as presented by Northwest Film Forum which runs September 16 – 26th, 2021. In addition to some in-person screening, all film programs will be presented on the Eventive virtual cinema platform and viewable on demand throughout the festival. Individual virtual tickets are sold only through Eventive; in-person tickets sold on nwfilmforum.org and at the NWFF box office at 1515 – 12th Avenue on the day of the screening. All passes are sold through nwfilmforum.org; passes granting virtual access will be processed within 18 hours of purchase.