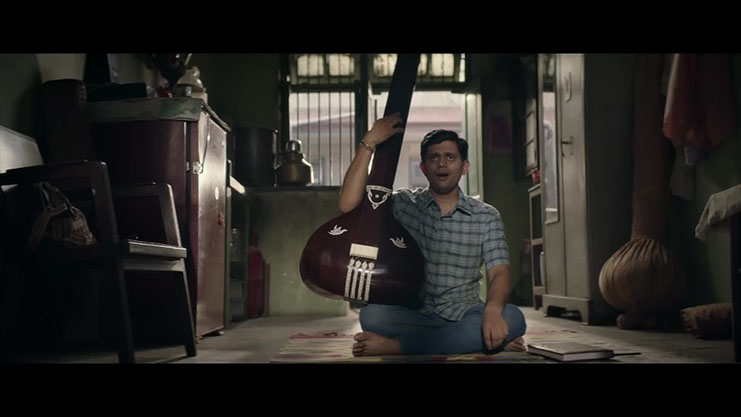 The Disciple which brought India its first Venice film festival award (FIPRESCI and Best Screenplay) in many years is a moving and layered examination of the power of Indian classical music and the life of a young musician Sharad Nerulkar (Aditya Modak) who strives to build a career in Mumbai.

The film follows Nerulkar as a young man in his early 20s in 2006 and then jumps ahead to his life more than a decade later with occasional flashbacks to his childhood. Sharad, who had begun music lessons with his father who had more passion than success in the field, now learns from guru Vinayak Pradhan (Arun Dravid) who himself had studied under a legendary guru, Maai (voiced by Sumitra Bhave). Both Modak and Dravid are trained classical musicians and their performances as guru (teacher) and sishya (disciple) anchor this film.

In recurring scenes, Sharad rides around on his motorcycle through empty Mumbai streets at night listening to rare recordings of Maai’s lectures on music and they shape his vision of his chosen profession. For Maai, music is demanding, and it is not just a profession but a lifetime commitment that demands much austerity and focus from its practitioners.

True musicians, according to Maai, perform for their guru and God and eschew fame and glory. Sharad’s guru, Vinayak Pradhan tells him that until he turned 40, all he did was practice (riyaaz), and the 24 -year- old Sharad takes him at his word. Sharad lives with his grandmother and rejects his mother’s querulous concerns about his earning capacity and dedicates himself to the purity of the art.

But music is also a business and Sharad is pained by the politics of classical music competitions and the success of a young woman on a TV reality show who goes from a talented unknown classical musician to a glamorous but superficial career in film music. As the film jumps forward to Sharad a decade later, he is teaching music at a school and his students do not share his passion for the purity of form and are eager to join bands and try fusion music. Fame and fortune still elude Sharad and his austere life begins to pale. In the final shot of the film, we are in a commuter train with a middle-aged Sharad, his wife, and daughter and the camera captures the bittersweet irony of Sharad’s life when a young, itinerant singer boards the train and performs hoping for a few coins.

The narrative of the film captures the intimacy of the guru-sishya relationship that is at the heart of India’s classical musical tradition and as the film progresses through Sharad’s life, we see his admiration for his guru morph into compassionate care for an old man living in a one room tenement with no financial security nor family to care for him. It is Sharad who bathes him, feeds him, and attends to his aging body’s needs. Intertwined in this film is an exploration of what happens to a classical art form premised on austerity and undying, single-minded focus on practice in a nation that has become globalized and in which music is a commodity and fame and glamor the currency of the art world.

The film unfolds slowly and elaborates on Sharad’s life in much the same way as a performer might open up the beauty and nuances of a raga. For those who know Tamhane’s earlier film, Court (2014), this film is quite different, and one can see the influence of Alfonso Cuarón who has served as Tamhane’s mentor. This is a film to be enjoyed for its subtle narrative and its excellent performances.

The Disciple is streaming on Netflix.