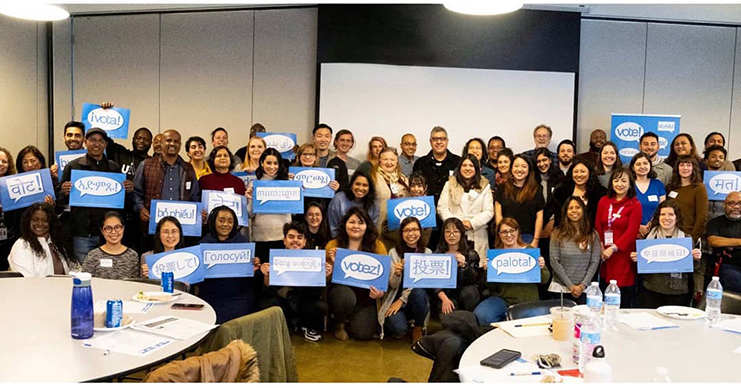 The census is relevant to civic engagement and political data staffers because it makes our work more accurate. As a data staffer, I help civic engagement organizations and their community organizers build people power in their communities, which often have been historically marginalized by our government. I provide access to and training for tools utilizing the voterfile, which is a database of all registered voters. Different Secretary of State offices across the nation have different voterfiles, but any given voterfile typically contains a great deal of data on every registered voter at the most recent time when they registered to vote.

The voterfile is integral to work in political campaigns as well as civic engagement programs because most campaigns and programs aim to drive their own preferred voter turnout as much as possible by hosting door to door canvass, phonebanks, mailers, emails, and peer to peer texting in order to contact voters, and the voterfile typically includes the necessary information (e.g. addresses, post office boxes, phone numbers, etc.) to make such intentional voter outreach possible.

Despite the importance of the voterfile, there are huge gaps to consider. The voterfile that is publicly available from a state’s Secretary of State office only includes information on registered voters. This gap might be okay for a political campaign given their short-term nature, but not so for community-based organizations such as the Asian and Pacific Islander Americans for Civic Engagement (APACE). These organizations typically have a longer-term vision than winning a particular election that is a few months away. They aim to make room on the table for historically marginalized communities so that the government works in a way that is more inclusive, accessible, and representative.

If organizations like APACE are limited to only reaching out to registered voters, then their programs would be hampered in working toward that longer term vision. One way to break past this limitation might be to simply knock on every door, call every number, and send mail to every box, but they usually don’t have staff that number in the double digits, so such a program would be either impossible or prohibitively expensive. That is where census data comes in to address the gaps of the voterfile.

The census is carried out every 10 years, and it is without a doubt the most comprehensive and inclusive survey done in the United States because it aims to survey every resident in the country. The United States Census Bureau carries out the census, and they are probably the entity closest to having the funding and resources necessary to do such a survey. Information from the census is anonymized, so no one finds information on any one particular person, but demographic information on geographies (etc. states, counties, cities, etc.) gained from the census, is posted on publicly available government sources.

The demographic information is very comprehensive; it includes data on race and ethnicity, which is indispensable to groups like APACE that aim to increase the people power of Asian and Pacific Islander communities. I and other data staffers use this data to inform civic engagement groups’ decision making, thereby helping their programs be more accurate and equitable than they otherwise would be. Using the race and ethnicity data from the census, groups like APACE can precisely know which areas are best their best fit for outreach. This informed approach to outreach minimizes the number of contact attempts to voters who don’t identify with a historically marginalized group, so it also makes equitable, precise outreach physically and financially possible.