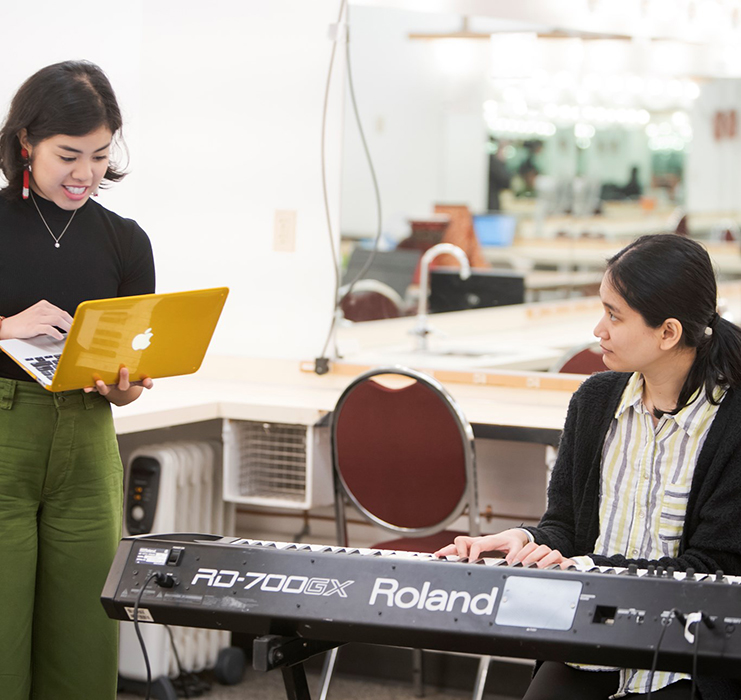 COVID-19 continues to affect Seattle’s local theatre scene, but some such as The 5th Avenue Theatre aren’t letting the pandemic stop them from producing and sharing work.  Coming up in early 2021, the 5th Avenue will present a radio version of a new musical entitled Half the Sky, with music by Tidtaya Sinutoke and book and lyrics by Isabella Dawis.

In Half the Sky, Aurelie copes with her sister’s death by setting out to fulfill her childhood dream of climbing Mount Everest. As she climbs the literal mountain, Aurelie also journeys across the landscape of her memories and the boundaries of her Thai American culture.

Half the Sky originated in September, 2018, when Sinutoke and Dawis partnered up as part of 5th Avenue Theatre’s First Draft Story Summit. “Isabella and I met each other in NYC,” Sinutoke said, “and she is a very versatile theatre artist and a very accomplished musician.”

Dawis also speaks positively of the partnership. “Tidtaya has a talent for writing beautiful melodies, and her musical sensibility is grounded in a deep understanding of theory and harmony,” Dawis said. “She’s fluent in many different musical styles, kind of like an actor who can believably play many characters.”

Beyond individual talents, Sinutoke describes their creative collaboration as seamless. “As collaborators, we love giving feedback to one another, both music and words,” she said. “Nothing beats writing in the same room, discussing, giving feedback, and creating many magical moments.”

Both of these musical theatre artists come to this project with long histories in the field. “I’ve been performing in musical theater for many years, and as an actor what I love most is collaborating with playwrights and composers, which is how I met Tidtaya,” Dawis said. “I hadn’t seriously considered writing as a bookwriter and lyricist until Tidtaya encouraged me. It’s a role that feels very natural to me, because I get to combine my musical education as a pianist and singer with my love for language and dramatic storytelling.”

Meanwhile, Sinutoke began composing music as a young child, and received training in both western and Thai musical traditions. “Composing theatrical songs always fascinates me because it is about storytelling,” she said, “and it’s like magic that people feel emotions, or that they would root for the characters, through songs.”

COVID-19 has changed but not disrupted the pair’s writing and revision process. “Before the pandemic, we met often to try out songs at the piano and talk through scenes, but of course now our process is virtual, much of it over Zoom,” Dawis said. “We were lucky to participate in the virtual Rhinebeck Writers Retreat this summer, so we’ve learned how to work in the cloud, with lots of screen-sharing and long phone calls with our director Desdemona Chiang.”

Sinutoke agrees that they have adapted, but not without a bit of wistfulness. “I always tell people that I miss going to Isabella’s apartment and playing her baby grand piano,” she said.

Since 2018, Half the Sky has participated in numerous festivals, awards and development processes.  “When I first began writing, I secretly wanted every word to be perfect,” Dawis said. “But now I know that’s not the point at all.”

The pair always tries to keep their focus on the show itself. “I feel like every opportunity we got was a true blessing,” Sinutoke said, “and we always ended up learning more about our story and our characters.”

Dawis reports that the biggest lesson she has learned is the importance of flexibility. “Everyone who works on this piece brings their own energy to the story and helps me understand how to make it better,” she said. “I’ve learned that while you should feel a strong desire and purpose towards your writing, it’s important to embrace change, because so much will be lost and gained along the way.”

Her increasing comfort level with change has also helped Sinutoke, as well. “As a composer, I tend to be an introvert and oftentimes, during the developmental process or festival, I would be in another room, trying to rewrite songs and didn’t really engage with performers,” Sinutoke said. “Fortunately, Isabella likes to spend time alone as a creative team and at the same time, also likes to spend time with others as well. That opens my whole developmental process, and I now love being in the room with everyone and getting to know them as collaborators and friends.”

For now, Dawis and Sinutoke are getting used to everyone being in separate rooms as they prepare for their radio adaptation.  “I wrote a brand-new version of the script, converting descriptions of onstage movement or images into either sound effects or dialogue,” Dawis said. “Sometimes I used a character to describe the setting or action, and sometimes I left it to our sound engineer to create the atmosphere I wanted. I’ve quickly learned that these changes are actually immensely helpful in clarifying the story.”

Sinutoke agrees that eliminating the visual aspect of the show helps highlight the narrative. “One of my professors in my undergrad said that humans only can hear a few things at once, so you have to pick what you want them to hear, and that is my biggest task as a composer,” she said. “But by adapting the show into an audio format, it also helps us learn more about the storytelling of the piece.”

Both collaborators are enthusiastic about continuing their partnership with other projects, beyond Half the Sky. “We are currently working on a Noh-inspired musical called Sunwatcher about Japanese female astronomer Hisako Koyama, with director Nana Dakin and producer/cultural consultant Ikumi Kuronaga,” Sinutoke said. “We are also developing an audio children’s musical for the Girl Tales podcast.”

Half the Sky will be presented in January, 2021, by The 5th Avenue Theatre, as part of its Essential 5th Originals Package online: https://www.5thavenue.org/shows/season-tickets/the-essential-5th/originals/