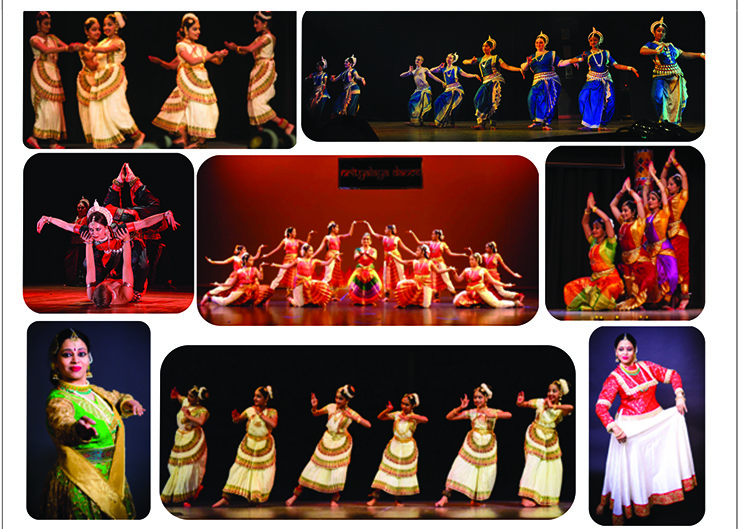 Nataraja is an ecstatic dancer, a version of the Hindu god Shiva, who dances the cosmos into existence. But just as the many regions of India differ widely, so too do portrayals of Nataraja, deemed the king of dancers, among the various schools of Indian dance.

This October, four of these schools representing different dance forms will present The Cosmic Dance of Nataraja, an event presented by the Friends of Asian Art Association, at Crossroads Community Center in Bellevue. The Association, often known as FA3, seeks to foster the arts of Asia here in the Pacific Northwest United States.

Yamini Gourishankar is on the board of FA3 and is organizing The Cosmic Dance of Nataraja. “When I joined FA3, my role included bringing events from the local Indian community to share with our expanded local community,” she said. “As we plan for the next year, our hope is to have a wider community reach and encourage events from a broad range of other Asian countries, such as those of the Middle East, Central Asia, Russia, South East Asia, and South Asia.”

This dance presentation is a follow-up to a prior event that Gourishankar coordinated for FA3. “I organized an art event last year showcasing artwork from different regions of India,” she said. “It was well received and I was asked if we could do another event this year focusing on the dance forms of India.”

Of the more than a dozen dance forms in India, The Cosmic Dance of Nataraja will highlight four: Kathak from northern India, Bharatanatyam and Mohiniyattam from the south, and Odissi from eastern India.

Although Gourishankar states that the program of dances is still being finalized, the schools involved have already begun to rehearse. “We will be presenting the theme of friendship with a couple of the songs,” said Vidyalakshmi Vinod of the Nrityalaya School of Dance. “The forum seems to be very interesting and brings together various classical dances of India, thus we felt it will be a good event to be a part of.”

Smitha Krishnan, founder of Mohini School of Dance, agreed. “Apart from reaching out to a wider audience which is always a blessing for any artist,” Krishnan said, “the most exciting part for the school is, of course, interacting with like-minded classical dance form enthusiasts in the area.” She is excited for her dancers to present the form Mohiniyattam, which she describes as being “known for its gentle footwork and swaying movements symbolic of the paddy fields of Kerala swaying to the gentle breeze.”

Gourishankar is also looking forward to comparing the similarities and differences of each form alongside the Puget Sound community. “The interesting aspect of these dance forms is the ability to narrate the same story differently,” she said. “While one dance form focus could be facial expressions, another dance form’s narration would be through the hand and leg movements.”

The FA3 presentation will be the result of challenging planning between countless individuals. “Summer is a busy time for the schools,” Gourishankar said. “They are traveling or giving performances or having annual programs so that not all are available at the same time.”

But she believes the performance will be well worth the challenges. “Art has this ability to communicate the incommunicable,” she said. “Where words stop, art begins.”

She finds this particularly true of Indian art. “Classical art forms of India, such as dance and music, fall under the category of revealing the incommunicable nature of this Creation, the Intelligence behind it and the role of an individual with respect to this Creation and Creator,” she said. “It was a great opportunity to bring this nuanced knowledge to a larger audience and celebrate with them.”

Gourishankar also believes the timing of The Cosmic Dance of Nataraja is ideal. “This event falls right after the nine-day festival of Navarathiri, or Nine Nights, and just a week before the Indian festival of lights, Diwali,” she said. “It is a celebratory time of the year, removing negativity and embracing goodness. We hope to bring that joyful spirit to the audience.”

The Cosmic Dance of Nataraja will be performed on October 13 at Crossroads Community Center, 16000 Northeast 10th Street, Bellevue.