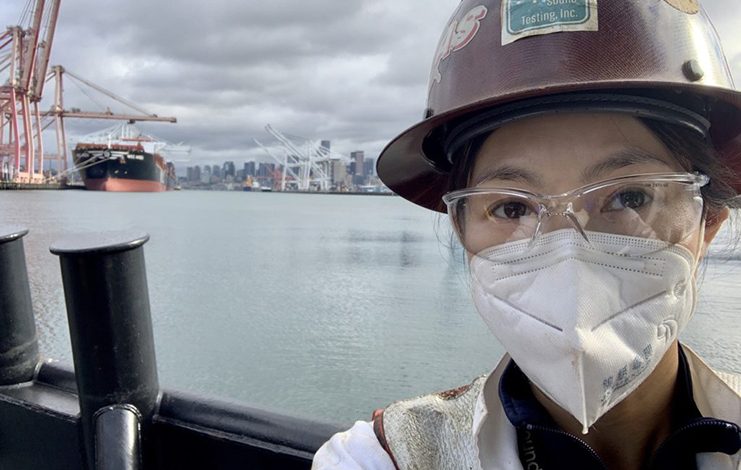 Marine chemist Amy Liu is very busy: at work, she focuses on the safety of the ship environment by analyzing chemicals, while in her spare time, she volunteers on the Maritime Advisory Committee for Occupational Safety and Health (MACOSH) and cares, alongside her spouse, for their three children.

As a marine chemist, Liu’s most common task is to perform atmospheric testing during the ship repair process. “I think my favorite task as a marine chemist is really the ability to support projects in general and to help people,” she said. “I typically inspect to make sure confined spaces have safe concentrations of oxygen and toxic chemicals for breathing and that there no combustible gases that could cause explosions.”

It’s the combination of science and the human factor that makes Liu’s work worthwhile. “Helping people figure out solutions to problems while keeping the work place safe gives me great satisfaction,” Liu said. “It feels good at the end of the day to know that I helped make a jobsite safer so that people can go home to enjoy what’s really important in life, family.”

For Liu, a Korean American adoptee to white parents, this family includes her parents. “I am very lucky that my (adopted) parents are so wonderful,” she said. “For me, being adopted was always something that was just a part of me.”

Although Liu feels an unbreakable love and connection to her parents, she says being adopted has influenced her to her core. “I often felt like I didn’t belong anywhere or like I was straddling different worlds,” Liu recalled. “It was really a struggle for me to accept myself when I felt like I was constantly falling short of expectations because I didn’t fit into what others thought I should be like.”

As an adult, Liu recognizes this is common to many people. “As I’ve grown, I’ve learned that the feelings of not belonging are not unique to adoptees, but I believe are a shared human experience,” she said. “Maybe those struggles were just not talked about when I was younger.”

Liu hopes to pass along love and connection to her children, age seven, four, and one month. “With my husband, Andrew Liu, we take care and effort to raise our children in the community, our Seattle community and Asian American community,” she said. “Talking about diversity, love for all people, and embracing our differences is central to our family values.”

Alongside that important work, Liu is also breaking down barriers. “Maritime, specifically the ship repair workforce has been primarily male,” she reported. “Over the years I’m seeing more women, and it’s really exciting! My hope is that as people see the different types of jobs and possibilities this industry has to offer, we see more women with these exciting jobs.”

Her volunteer work on the MACOSH committee aims to support the community, as well. “This committee is a great avenue of communication between OSHA and industry,” she described. “As a committee member, I am able to discuss hazards and challenges that our industry faces and work with experts and then help to create guidance documents. These documents can be distributed to industry with rules, suggestions, and support for workers.”

Liu wants everyone to know that the Puget Sound area has a vibrant commercial fishing fleet community, Washington State Ferry System, Cruise Ship industry, and Navy community. “As the ship repair workforce ages, many knowledgeable people are retiring leaving a knowledge gap,” she said. “I hope that younger people learn how important the maritime industry is for our overall community.”

So she hopes to share that knowledge, and more importantly, encouragement. “I spent a lot of my early adulthood judging myself and believing that I was not enough,” she remembered. “That voice in my head was probably my biggest challenge and kept me from asking more questions. I was too afraid of what others might think of me, that I didn’t ask for help or seek guidance.”

This courage is vital now that Liu is juggling both work and family. “Work-life balance is always a challenge!” she admitted. “It’s a tough juggle and I try to remember that every choice to do something extra for work is pulling me away from my family.”

And yet, Liu sees work and family as connected, rather than in opposition to each other.  “I’m lucky enough to be the first female certified Marine Chemist by the National Fire Protection Association,” she said, “but it was done with the support from many people, colleagues, family and friends.”

Along the way, Liu strives to be a good role model for others. “My hopes are that my kids, and all the kids out there, grow up in a society where they see others like themselves in influential positions and see possibilities for themselves,” she mused. “I also hope that my kids feel supported enough by family, community, and society to ask questions!”