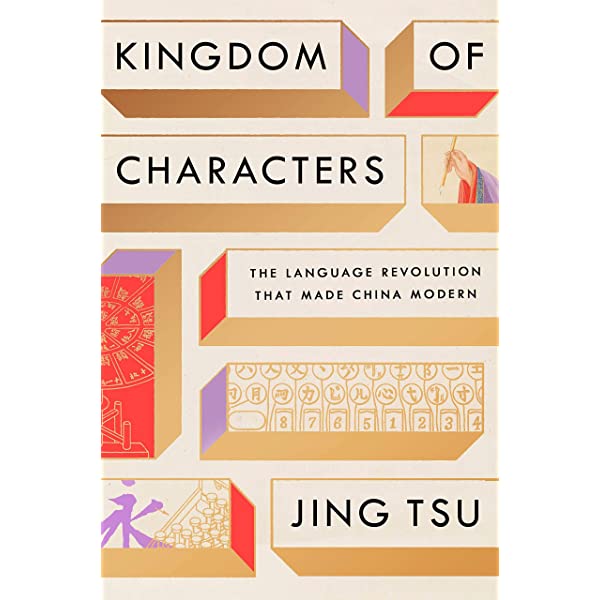 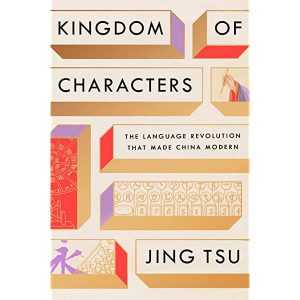 Kingdom of Characters: The Language Revolution That Made China Modern, by Jing Tsu, takes us through the beginning of the Chinese language in revolution, the challenges to make Chinese typewriters, telegraphy, creation of a phonetic system, character simplification, to the recent times when Chinese language interfaces with the digital world.

This is what the publisher says about “Kingdom of Characters”:

“What does it take to reinvent a language?

“After a meteoric rise, China today is one of the world’s most powerful nations. Just a century ago, it was a crumbling empire with literacy reserved for the elite few, as the world underwent a massive technological transformation that threatened to leave them behind. In “Kingdom of Characters”, Jing Tsu argues that China’s most daunting challenge was a linguistic one: the century-long fight to make the formidable Chinese language accessible to the modern world of global trade and digital technology.”

The book is aimed at an English speaking audience. The following basic information will prepare the prospective reader. The Chinese language is spoken in hundreds of regional dialects. Some linguists even describe these dialects as different languages, as they use different sounds, and some different words. A person who knows one dialect will most likely not understand a different dialect. As an example, I speak Cantonese and I do not understand Mandarin at all. But written language is about the same for everyone, in other words, everyone writes the same words. So theoretically everyone can “read” the same piece of text.

Before the 20th century, most Chinese people might only hear their own dialects all their lives. As faster transportation made it possible to easily go from one region to the next, the need for a national spoken language became more urgent.

“Now that the Chinese script has fully entered the Information Age on its own terms, “there has been a resurgence of (Chinese) nationalistic pride and cultural interest surrounding the Chinese language.” And as China becomes a global power, and wields its economic prowess in Asia, Africa, South America, and even North America, many people around the world see the value of learning about China, the Chinese, and the language.

Today, we seamlessly communicate on cell phones in Chinese. This outcome is the result of the hard work of so many people who got Chinese ready for the computer age. This book’s story about these people is not taught in schools, and almost all new to me. It is really true that we stand on the shoulders of giants. Their “larger-than-life” stories are almost too incredible to be true. And the author weaves in some cliffhangers, so that parts of the book read like a fictional adventure story.  We encounter “an exiled reformer who risked a death sentence to advocate for Mandarin as a national language, a Chinese-Muslim poet who laid the groundwork for Chairman Mao’s phonetic writing system, and a computer engineer who devised input codes for Chinese characters on the lid of a teacup from the floor of a jail cell…”

I also notice that many of these innovators were in a sense outcasts, outside of the mainstream. Their experiences of being exiled, jailed, living in foreign countries, practicing less common religions, and learning non-Chinese languages, likely expanded and informed their outlook. We are justified to conclude that the diversity of experiences leads to diversity of thought and creativity. The important message for me here is that cultural richness can result from a more inclusive society that values the strengths from each individual.

Our protagonists were also risk takers, ready to dedicate or even risk their lives to bring Chinese to the 20th and 21st centuries, to a world dominated by science and technology.

The Chinese word is an immense challenge for this task. Each is visual, geometric, made up of strokes and cannot easily be broken down into a short list of parts, as in an alphabetic language. Creating a practical Chinese typewriter was a very difficult problem a hundred years ago, and again telegraph transmissions posed challenges. And unique systems of computer input and output had to be invented to handle Chinese.

Late 19th century China was at a very low point: a disintegrating Qing dynasty, warlords, social unrest, rebellions, pillaging, drought, famine, and revolution in the air. Foreign powers including European countries, US, Japan, Russia were carving up China. There even circulated a map of national humiliation. Compared to these other national powers China was the “weak man of the east.”

In order to keep pace with western advancements in technology and power, it seemed China had to emulate the west. “The onus was mostly on the Chinese to modernize – or, what amounted to the same thing for most of the twentieth century, to westernize.”

So the book tells the story from that low point in China to the world now where China is stronger than ever. A story of power: how to keep up and not get left behind, and how to achieve it. And the transformation of the language is central to this story.

There is a parallel story (perhaps for another book) of gains and losses, of the effect of the path that the Chinese language has taken. As with any standardization, there is also a loss of diversity. I wonder how many dialects have been lost, or will be lost.

We do get glimpses in this book into some adjacent effects like the growth of literacy. Around the turn of the 19th to the 20th century, “the rate of literacy among men was less than 30 percent, and as low as 2 percent for women.” “By 1982, the literacy rate for people over age fifteen nationwide had risen to 65.5 percent, and it reached 96.8 percent in 2018.”

One interesting idea the author points out, “every technology that has ever confronted the Chinese script, or challenged it, also had to bow before it.” This phenomenon seems to have occurred in past centuries. The non-Chinese cultures that conquered and ruled China like the Mongol Yuan dynasty and the Manchu Qing dynasty, seemed to have to adapt to the Chinese language too.

There is no denying the story in the book is complex, full of historical background and technical Chinese language details. The author does a pretty good job balancing between providing a solid context for the reader to saying too much, making the book very long and dragging out the story.

The book is a worthwhile read about this little known chapter of Chinese history, especially now when China’s influence spreads as a leading global power, and the Chinese language has become a vital link to the Chinese world.