Shunji Iwai’s Hana to Arisu Satsujin Jiken or The Case of Hana and Alice (which should actually be “Murder Case”) follows the titular girls as they set off to solve the mystery surrounding a bizarre rumor circulating in their middle school. Borne the year before from an incident that happened in the very classroom they belong in, the embellished rumor involves a 9th grader named Judas, along with four other Judases who happen to be his wives.

One of the wives finds out about his polygamous status and decides to poison him with Anaphylaxis in the classroom. No one knows which wife committed the deed. What people do know is that the location of his death—conveniently located in the center of the classroom—is cursed. If disturbed, the restless Judas will rise and possess the person that dared to disturb his underworld existence.

This tongue-twisting murder riddle mystery will be shown at the Grand Illusion Cinema on Aug. 31, Sept. 1 and 8. Originally released in 2015, this animated feature is the prequel of Iwai’s earlier work Hana and Alice, which was a live-action film released in 2004. Since “Hana and Alice” is set when the two girls are in high school, The Case of Hana and Alice takes place in Ishinomori Middle School (perhaps a tribute to Shotaro Ishinomori, the mastermind behind the “Power Rangers” series?) and explains how the two became friends when they were 14.

Eleven years had passed since the release of Hana and Alice, and because Iwai wanted to use the same actors from his first production, he was faced with the challenge of somehow convincing the audience that his main characters had gotten younger. Rotoscoping, an animation technique where motion picture footage is traced over, made this deception possible with the additional use of digital colors and 3D computer graphics.

Iwai, who was the first Japanese director to receive the Lifetime Achievement Award at the 15th New York Asian Film Festival, is known to have unconventional story sources for his films. Hana and Alice was no exception, as its origin comes from a series of Kit-Kat commercials in the form of short films that Iwai had directed, commemorating the chocolate wafer stick’s 30th anniversary in 2003. This explains why, at one point in the movie, a scene in The Case of Hana and Alice primarily shows a Kit-Kat bar package for a full 30 seconds. On a side note, Kit-Kat is immeasurably popular in Japan where it comes in a host of different flavors that even have special editions according to the region. Some examples of flavors are sake, uji hojicha, azuki bean paste sandwich, and even high-end ones that sell at about $4 per stick.

Although his plots have unusual roots, his stories have similar characteristics. Being a visual director, Iwai’s stories are largely image- and character-driven and less by narrative. “I’m not interested in a normal guy, like just a good guy doing good things. That’s boring to me,” he says in an interview with the online magazine “Asia Pacific Arts.” “I prefer people who are missing something. Children are one of these kinds of people.”

Iwai is known for making somewhat capricious and borderline earnest movies that revolve around Japanese youth, capitalizing on the ennui and disjointedness experienced in adolescence. It comes as no surprise then that his characters are young people somewhat withdrawn from society, which applies to The Case of Hana and Alice. Alice, or Tetsuko Arisugawa, is a transfer student who moves to the “boonies” after her parents get divorced. From the first day of school, she immediately gets bullied by her classmates who treat her like a virus, even going so far as to avoid anything she touches.

Not to be outdone, Hana is Alice’s next-door neighbor, a recluse who lives in the Floral Folly, a home decked with plants and flowers (perhaps a play on Hana’s name since it means “flower” in Japanese). She is a truant who got held back a year and would be in the same class as Alice. The source of the ghost story comes from Hana’s classroom. Hana can often be observed spying on people from her bedroom window, which caused Alice to fall off her second-story window ledge on the day she moved in.

Iwai is also drawn to beautiful cinematic imagery, which might also explain his decision to rotoscope. The urban and rural suburban backgrounds are transformed into a pastel of colors that, on its own, would look ordinary. Visually, it may not be appealing for some who are used to the flashy and detailed Japanese animation that is out there nowadays, but movements and facial expressions are captured that might not be possible with regular animation. 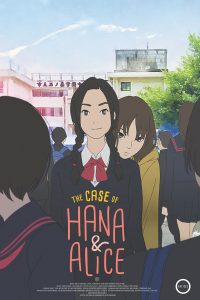 The Case of Hana and Alice

From the first day of school, Alice has a difficult time settling into her new town. Assigned to a seat she later discovers is cursed, she is shunned by her peers at school. She also has a mysterious reclusive neighbor named Hana whose mother often harangues them about their trash. As she unpacks, she finds some school papers belonging to the previous tenant stowed away in her closet. Not knowing whose they were, she returns them to her closet.

Things start to get a little better when she discovers a childhood friend she learned ballet with named Fuko attends the same school. Alice learns from Fuko about the murder of a 9th grade student named Judas from the year before who was also killed by Judas. She finds out the story takes place in her classroom. Alice soon puts two and two together and realizes Judas was her home’s previous tenant (Yuda is a Japanese surname, and that is how Judas is pronounced in Japan): The school papers she found belong to the Judas who died in her classroom.

Horrified that she might be sleeping in a dead boy’s room, she desperately seeks help. She finds out from fellow classmate Mutsumi Mutsu, the most revered student in her class, that Hana was in the same class as Judas. Alice impulsively enters Hana’s home and confronts her about Judas. Hearing the rumors for the first time, Hana proposes to send her on a mission to find out if Judas actually died and concocts a plan.

The plan seems flawless enough, but of course, nothing goes as planned, leading to mistaken identities, car chases, hilarious performances, lies, uncomfortable situations, unexpected and delightful human contact and kindness, missed trains, stakeouts, and the start of yet another set of wild rumors. Hana’s and Alice’s hilarious antics and vulnerable moments will have audiences of all ages bursting with laughter and, for older audiences, smiling with heartwarming understanding. Perhaps it will inspire some to investigate and seek out the truth behind the rumors in their own lives. Iwai’s story has mystery, comedy, adventure, drama and hilarious high school antics that will be appreciated by all—a perfect summer movie for the whole family. 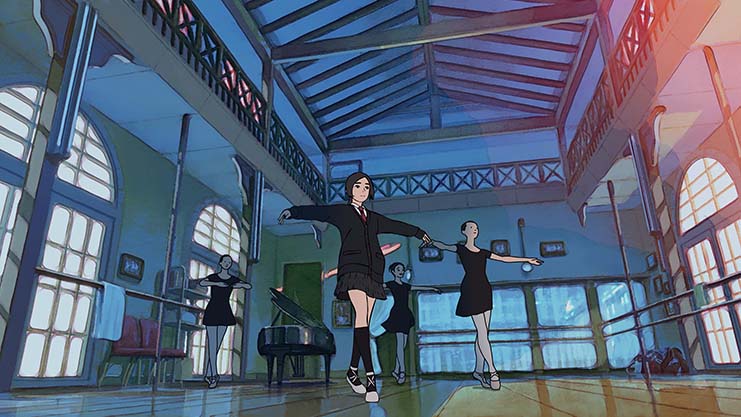