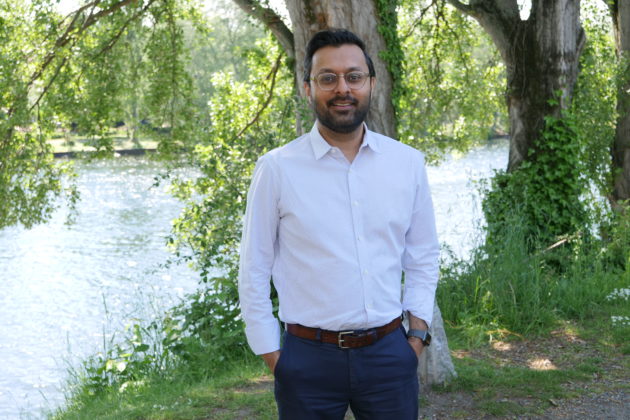 “When I went back to get a masters in art history in my mid-30s, my parents were supportive. They were a little confused but they did not shun me or anything like that,” said Manish Engineer, an Indian-American originally from Cleveland, Ohio, who was recently hired as the Seattle Art Museum‘s first Chief Technology Officer (CTO). “Like many Indian families, my parents were focused on their kids becoming engineers, doctors or lawyers. However, I am lucky they accepted my interest in art. My parents are overall pretty liberal.”

Part of their acceptance of Engineer’s path may have been the fact they themselves integrated into American careers, his father as an engineer and his mother as an echo-cardiogram technician. Just as Engineer’s parents are a fusion of their native India and their adopted United States, Engineer is a professional and educational fusion, given he studied computer science as an undergrad, has a masters in art history and an MBA from Duke University.

“My MBA allowed me to move beyond just computer science and connect to other realms,” Engineer stated. In his current job at the Museum of Modern Art in New York City (MOMA), Engineer said the skills and knowledge from his MBA have allowed him to communicate effectively with the marketing and financial departments. His masters in art history helped him get his foot in the door in the museum world as a volunteer from which he secured permanent employment up to where he is today. His computer science background explains his love of technology, obviously central to his upcoming role as CTO at the SAM.

“Seattle’s place as a tech hub is one of the major things that drew me to the city,” said Engineer. He said that the SAM – which encompasses the Seattle Art Museum itself, the Asian Art Museum, and the Olympic Sculpture Park – is by itself something that excites him. However, the combination of this with Seattle’s technology scene makes him especially eager to work at the SAM.

Engineer said he hoped to potentially partner with Amazon, Microsoft and other tech firms to see how to use their products to enhance the visitor experience at the SAM. For instance, he mentioned possibly using voice-assistance technology to help the visually impaired. He said he is excited about hearing what ideas people in the tech community have for the SAM. He did note that he is part of a team at the SAM and that he will be working with their marketing team and museum curator on many of his efforts.

Engineer is also excited to possibly use Meetup groups and other community outreach to meet with SAM patrons and hear their ideas about how to use technology to create a better museum experience. He mentioned a revamped website and the possible development of a SAM app. More than anything, he said he wants to go on a self-described “listening tour” before making any decisions or starting any large projects.

As an employee of the world famous MOMA in New York City, Engineer went to national conferences where representatives from art museums gather as a way to hear new ideas he can bring to the SAM and to increase the SAM’s national presence. Internationally, Engineer hopes to possibly reach out to international tourists – especially those from China – to increase interest in visiting the SAM. At the MOMA, Engineer said they fell far short of the cross-town Metropolitan Museum of Art’s efforts to attract Chinese tourism. He is excited to possibly apply the lessons he learned at MOMA to the SAM.

A higher profile, innovative art museum scene coalesces well with a rapidly growing local economy and world tech hub. Just like Engineer’s professional and educational background is a fusion of many worlds, with Engineer’s help, Seattle too will become a fusion of technology, business and art.