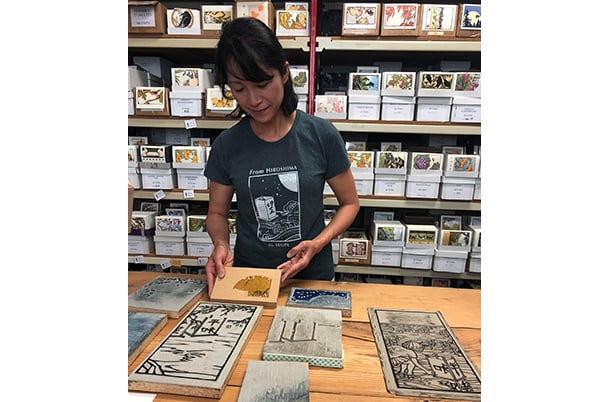 To meet the Japanese American artist behind Seattle’s “From Hiroshima to Hope” posters, you need to travel to a castle in Tacoma: the Tillicum Building, designed in 1929, shaped like a castle from the outside. Once you arrive, expect a cheerful studio and shop full of natural light, boxes and boxes of brightly colored letterpress cards and envelopes, intricately carved woodblocks leaning against the windows, and even several small birds who twitter happily in their cages.

Yoshiko Yamamoto, co-founder of The Arts and Crafts Press, is the resident artist at Tacoma’s Arts and Crafts Press. For the last five years, she has been donating her artwork and design skills to the all-volunteer nonprofit group which organizes “From Hiroshima to Hope.” Organized annually since 1984, the event draws hundreds of attendees to commemorate the anniversary of the nuclear attack on Hiroshima, Japan, and to express a larger interfaith wish for peace, community, and understanding. Yamamoto’s husband, Bruce Smith and co-founder of the Press, has been part of the committee since 2012.

With roots from Tokyo, Japan to Berkeley, California, to Port Orchard and now Tacoma, Washington, Yamamoto has spent her artistic career in pursuit of many of the ideals of the Arts and Crafts Movement (which extended in part into Japan’s Mingei movement): a valuing of everyday handmade objects and landscapes as sources of beauty, a close connection between designers and makers of products. These interests accompany her on her travels to different art fairs, letter press celebrations, block print exhibits, and other events nationally and internationally.

Despite the wide distribution of the Press’s works, thanks to a large (and expensive) national distributor, Yamamoto also enjoys traveling to these events. “People need to be convinced about the [handmade, artisanal] experience,” she says. “Many people still think that my cards are designed or made by a computer.” Going to events enables her to talk to potential customers and to talk about the processes behind letterpress work and block printing.

Yamamoto now describes herself as “lucky,” having taken up letter press and block printing before it became popular. She began teaching herself in the mid-1990s while in Berkeley, California, working with master printers like David Lance Goines and his assistant Richard Seibert who mentored her. “I didn’t even know what kind of ink to use [then],” she laughs. “Richard was a perfectionist when it came to the beauty of a printed page,” she adds. “I remember he often examined the printed letters on a page with a magnifying glass to make sure each letter looked even, clean and crisp. He meticulously showed me how to adjust the amount of ink, or the amount of pressure to apply to the image to be printed. Though I moved on to work on blockprinting, I’ve learned from Richard the importance of being meticulous and methodical when we work on our art.” Her other source of inspiration is mokuhanga (Japanese woodblock prints) from the 1800s until 1940s, which she praises for their “bold composition, exquisite lines, and incredible craftsmanship.”

Starting in the 1990s, Yamamoto and Smith bought their printing presses for hundreds of dollars when they would now go for thousands. They once spent two months on a cross-country road trip studying the work of famous Arts and Crafts architects Greene & Greene, a journey which led to books and articles. As a former editor of American Bungalow magazine, Smith worked with many devotees of the Arts and Crafts movement and helped organize several conferences on the movement for New York University. The two started Arts & Crafts Press in 1996 and created a letterpress magazine, The Tabby, devoted to the contemporary revival of the Arts and Crafts movement in the United States and abroad.

The black-and-white magazine, however, wasn’t quite enough to satisfy Yamamoto artistically: “[With The Tabby] I was working with black, black, and black, every day, and I couldn’t take it anymore.” She studied the color palette used by the Arts and Crafts movement, a muted, Victorian, “earthy” palette, as well as the “bolder, primary” colors used by the Modernists. Here she “learned that green, for example, was not just a simple green.” She had to learn “how to create the right shade of green, using the right combination and shades of yellow and blue.” Their family’s move to the Pacific Northwest in 2001 precipitated a more vibrant color palette that is one of the hallmarks of the Press’s work. “I needed more color with all that gray,” she says. The couple found an artist-friendly “inclusive” community in Tacoma, including its Spaceworks business incubator program for artists. Yamamoto’s network includes other Tacoma-based letter press artists like Jessica Spring and Chandler O’Leary—“we became friends before we even moved to Tacoma,” she says—and they even share an employee.

For block print Yamamoto began to learn about techniques, carving methods, and media starting with the “friendlier” linoleum and progressing into wood. She now uses birch plywood, which is softer, and doesn’t split as easily, as well as cherry wood, which is tougher but allows her to carve more intricate designs. As Yamamoto carefully places a series of carved blocks on her worktable, each one a layer or element of a larger block print design, it’s inspiring to see the care and design that goes into her work. The elements of the “Hiroshima to Hope” designs, for example, each involve a series of blocks that need to be hand-carved, printed onto another block, hand-carved again, run through the press and then printed in successive layers.

As for the future, Yamamoto sees herself moving towards a more traditional Japanese method of woodblock printing. The method offers a higher degree of challenge. ‘As a craftsperson, once you reach a certain level of skill, you have to keep challenging yourself,” she says. The Press remains committed to using environmentally friendly paper, materials and packaging and even ink, without sacrificing quality. “People who buy the cards tend to frame them,” she offers, modestly. “I want them to last.”

For this year’s event on August 6th at Green Lake, the all-volunteer group is offering an original of Yamamoto’s block print “Peace Forever” to the first 40 people who donate $50 or more. Commemorative T-shirts with a different design are available for $20 donations and to event volunteers. The event begins at 6:00 pm with a gathering south of the Green Lake bath house, involves speakers, performances, and concludes with a lantern floating ceremony. Details are at the group’s website (fromhiroshimatohope.org).