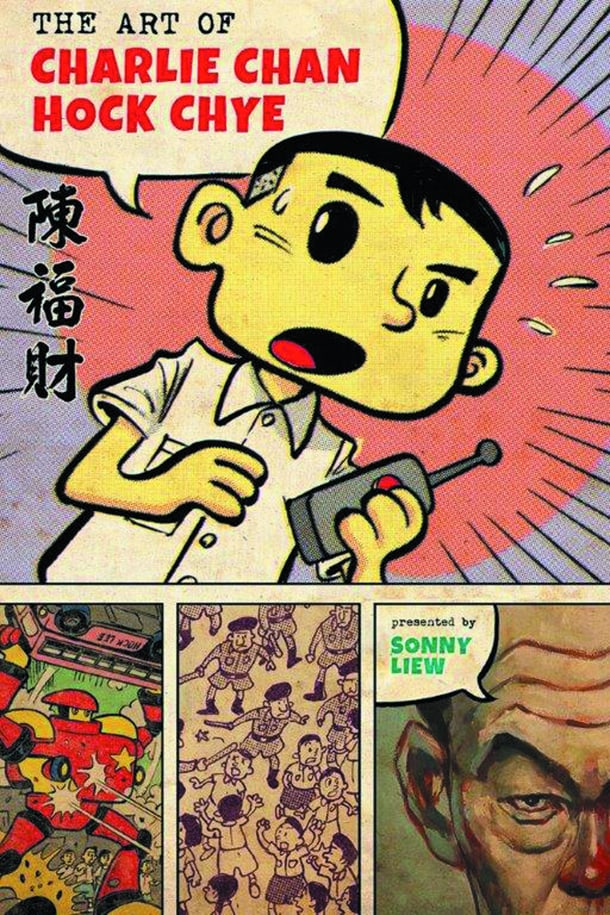 A book may have many layers, but unless it can be enjoyed on a superficial level, that book will not be read, and those layers will remain undiscovered. Sonny Liew’s graphic novel, The Art of Charlie Chan Hock Chye, has been able to attract an outpouring of rapturous praise from both around the world and within Liew’s adopted nation of Singapore because, its author has created an enjoyable story. That he has many things going on at once in this book cannot escape the attention of even the most casual reader, and because Liew has interwoven these different materials so masterfully, most reviewers (both professional and amateur) have found the results deeply enjoyable.

In graphic novels, the artwork creates the most immediate impressions. In this case, the liveliness and variety of the drawings do not merely serve the narrative, but also exist as the heart of it. Like Scott McCloud’s Understanding Comics, this book uses comics as a means of expression for talking about comics as a subject matter.

The Art of Charlie Chan Hock Chye tells the story of Singapore’s history, as it had found expression through the title character’s long cartooning career. Its original Singapore publisher, Epigram Books, introduces The Art of Charlie Chan Hock Chye as “a biography showcasing the life and work of Chan Hock Chye, a pioneering but largely forgotten comics artist in Singapore.” That publisher’s website links to a 2 ½ minute promotional video, in which we see Chan Hock Chye (intercut with fuzzy, old footage) playing a children’s game that is described in the book, working at his drawing table, visiting a bookstore, looking out over the city, walking down the street, visiting the gates of Chung Cheng High School, and back in his studio. It all adds up to an elaborate ruse. Although the old man in the videos closely resembles the old man that the book presents as Charlie Chan Hock Chye, that old cartoonist and all of his works were invented by the young cartoonist Sonny Liew. For convenience, I will discuss the fictional Charlie Chan Hock Chye as if he were a real person who did the things that the book shows him doing.

The book begins with Chan being interviewed at the age of 72 in 2010, and then republishes his precocious, localized, giant-robot story, which he had drawn when he was 16 in 1954. We see Chan’s drawings change radically over the years, as he creates various comics fashioned after the work of several great cartoonists, mostly world-famous Americans, including Harvey Kurtzman, Walt Kelly, Frank Miller, and Carl Barks. Those familiar with comics history can marvel at how expertly Liew has been able to reproduce their different styles. Appreciating The Art of Charlie Chan Hock Chye, however, does not require such background knowledge. I can attest to this, based on my pleasure in reading Chan’s giant robot stories which, as I learned only later, copy the look and theme of Mitsuteru Yokoyama’s manga Tetsujin 28-gō (a.k.a. Gigantor.)

Just as Liew’s book does not require background knowledge about comics history, it does not require background knowledge about the history of Singapore. The book functions as an introduction to Singapore’s history, and the graphic novel format helps to make this information both absorbing and understandable. At the same time, the overt fictionalization (for example, by introducing that giant fighting robot into the story of the May 13, 1954 confrontation between police and students) keeps the reader both alert and entertained. Captions provide a few annotations where necessary to distinguish facts from fictions.

By following Charlie Chan Hock Chye’s life story, the reader is introduced to an almost encyclopedic catalog of the professional barriers that cartoonists face, many of which seem universal and some of which seem specific to Singapore. A reader unfamiliar with Singapore cartooning might conclude from this long series of obstacles that Liew had invented his character on a blank slate because local cartooning about local political issues had been so difficult as to become impossible. (This was almost true, but not entirely.) Those with more background knowledge will recognize cameo appearances of the Singaporean cartoon character Mr. Kiasu, characters from the autobiographical comics of the cartoonist Lat in neighboring Malaysia, and other local references.

Perhaps partly because Liew began his work on this graphic novel with the larger format of a traditional art book in mind, I ended up reading The Art of Charlie Chan Hock Chye through a Fresnel lens (one of those flat, rectangular, plastic magnifying lenses that they sell in office supply stories). This not only made the book easier to read (the type gets pretty small in places), but made me feel immersed in the story in a different way, as the lens brought out the strong sense of three-dimensional space in Liew’s drawings.

The Art of Charlie Chan Hock Chye received a lot of valuable publicity when Singapore’s National Arts Council withdrew its publishing grant for this graphic novel a day before its launch date, and demanded its money back. The Council later explained that Liew’s version of Singapore’s history “potentially undermines the authority or legitimacy of the Government and its public institutions, and thus breaches our funding guidelines.” News coverage of this decision did not explain why such government support had been needed in the first place. The Art of Charlie Chan Hock Chye has achieved well-deserved commercial and critical success, appearing on the New York Times’ list of bestsellers and winning the title of “Book of the Year” at the Singapore Book Awards this May. Nevertheless, if its author had had to depend entirely on decisions of profit-driven publishers to support such an ambitious, labor-intensive, lavishly-produced project, this story of Singapore would have remained untold.