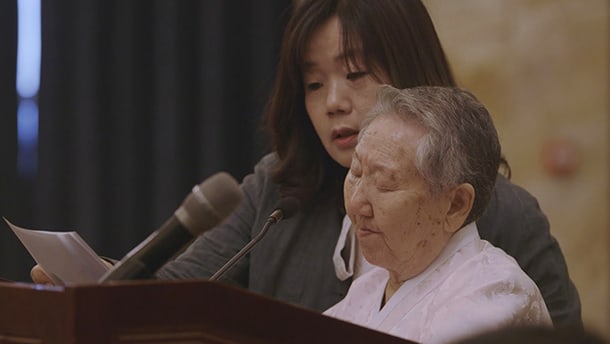 When director Tiffany Hsiung set off to document a study tour in 2009 about the atrocities of World War II in Asia, she never expected to become so moved by the testimonies she heard there that she would come away with a determination to learn more about the lives of the survivors, particularly that of military sexual slavery.

“The testimonies from these survivors blew me away,” said Hsiung. “Not only is it beyond shocking that they went through these inhumane acts of sexual violence, but that after seven decades, the women that we met [still] ended their testimony with, ‘Please, just believe me.’ I immediately felt a deep pain in my stomach, imagining how life must have been like after war, and for so many, how silence was their only choice to live a somewhat ‘normal life’ that many of the women that came out waited for their husbands to pass away and for their children to be married and leave the house. So much time [is spent] self-prisoned in the pain of what you experience with no one to share it with.”

Perhaps driven by her own experience of sexual assault as a child, Hsiung wanted to learn how their experiences impacted the rest of their lives and affected their relationships with their family.

As women’s testimonies and accusations of sexual assault get taken more seriously with the advent and rise of movements such as #MeToo and Times Up, PBS’ decision to air Hsiung’s 2016 documentary The Apology about the lives of three so-called comfort women from three different countries could not have come at a better time.

“Over the course of six years, each of the communities that we filmed demonstrated the importance of camaraderie,” Hsiung said. “Knowing that you aren’t alone and that you will be supported after disclosing your past can make the difference between speaking out versus living the rest of your life in silence and carrying the burden and pain of what you experienced as a victim. Society has perpetuated a culture of shame that has resulted in decades, or even a lifetime, of silence for survivors of sexual violence.”

Taken as sex slaves for the Japanese Imperial Armed Forces

Hidden in the annals of history with only a few existing records of their subjugation, over 200,000 women from the ages of 11 to 33 were tricked and coerced to perform as sex slaves for the Japanese Imperial Armed Forces. Women were often “recruited” by means of force and deception, sometimes by their own countrymen, and taken to military brothels or “comfort stations.”

It is estimated that 90 percent of the recruited women, euphemistically called “comfort women,” did not survive the war. Many of them died from sexually transmitted diseases while others died from the violence inflicted upon them. Some became pregnant or infertile. Others committed suicide.

Women came from countries all over Asia and even included Dutch and Australian women in some cases, but most were from Korea and China. These comfort stations lasted even after the war, serving American men, until Gen. Douglas MacArthur shut them down in 1946.

The existence of comfort women were relatively unknown until the 1980s, and it was not until South Korea became a liberal democracy that Korean victims started coming forward with their stories. Since Jan. 8, 1992, the Korean Council for the Women Drafted for Military Sexual Slavery by Japan, otherwise known as the Korean Council, has been holding protest demonstrations with survivors in front of the Japanese Embassy every Wednesday at noon, demanding justice and reparation from the Japanese government.

The Apology focuses on the lives of three survivors, or “Grandmas,” as they are referred to in the film, living in Korea, China and the Philippines.

Grandma Gil lives in Seoul. Originally from what is now North Korea, she was 13 when she was lured away by strangers who promised her a good job. Tagging along with her friends, Grandma Gil had no idea she would then be taken to Harbin, Manchuria, in 1940, forever being separated from her family, never to see them or her hometown ever again. Grandma Gil joined the protest demonstrations in front of the Japanese Embassy when she was in her sixties after many years of denying her past.

Grandma Cao lives in Yu Xian County in China and was about 18 when she was recruited. She stayed at a comfort station for two years, but during that time, she gave birth to two children, and out of desperation, ended up strangling one and throwing away the other in the field she gave birth at. Her adopted daughter was stunned as she listened to her mother’s story for the first time.

Grandma Adela lives in Roxas City in the Philippines and was 14 when she was kidnapped with her friends by Japanese soldiers. When she finally returned to her parents, she only told her mother and kept it a secret from her own family after she got married to protect them from the shame society placed on rape victims.
The regret she carries of not having told her husband before he died burdens her in her old age, and she strives throughout the documentary to muster the courage to tell her children before it is too late.

The Apology is a riveting and compelling documentary, giving a deserved voice to a population that gets little public attention. The scope of this film will have even those who have long known about the comfort women issue to be able to add depth and insight to their own knowledge as the film examines how sexual slavery affected the lives of women from three very different countries in the aftermath of war. It is a reminder that despite having different physical features or cultural backgrounds, human experience is universal, an element that unites us rather than divides.

The Grandmas featured in this film will affect and perhaps inspire people from all facets of life after witnessing their courage and bravery to continue facing life after all they had lived through.

“Our goal was for people to remember these three women,” said Hsiung. “For it to release sparks and necessary dialogue in how we contribute to this chain of silence among ourselves and among those who have survived sexual violence and need a safe space to talk about it. I hope that their stories will inspire all of us and especially give support to other victims of sexual abuse, who may feel encouraged to break their own silence.”

“The Apology” will be aired on PBS’ POV series on Monday, Oct. 22. Check local listings for times.