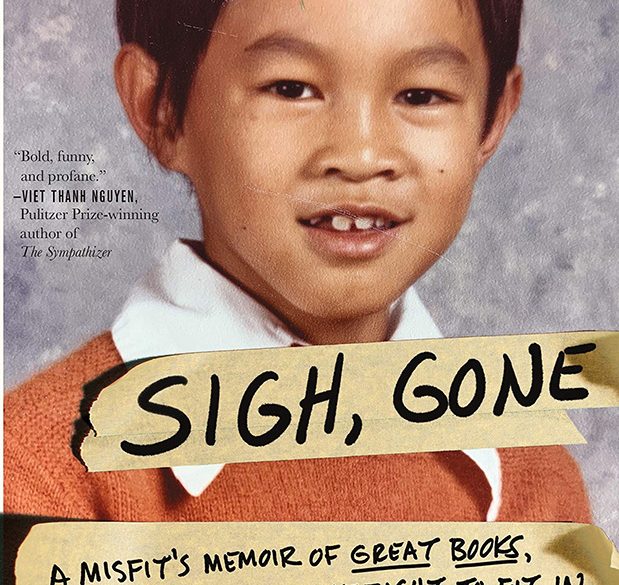 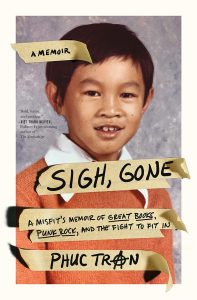 With a name like Phúc, there was no way the Sigh, Gone memoir’s author could have avoided the physical and proverbial fights he would encounter in small-town Pennsylvania where he and his family eventually settled after fleeing Vietnam in 1978. Phúc Trần’s story is recognizable to anyone who finds themselves on the outside looking in but remains hopeful that there is a place for them where they will be enthusiastically accepted.

Trần sectionalizes his uniquely American journey by 12 book titles, all literary works so easily recognizable to the bookish among us. The connections he builds between these books and his own life, though, act as allegories that both contextualize stages of his life as well as demonstrate the humanistic timelessness of the tomes.

Trần’s love of the English language is clearly evident, as when he uses words such as “prurient” and “flensing” with much ease and accuracy. However, you can be forgiven for feeling a bit sorrowful when Trần increasingly laments the vanishing fluency of his Vietnamese that he depends on to communicate with his parents. The proverbial bridge between his parents and himself steadily — sometimes subtly, sometimes not — erodes and is replaced with long silences and frustrating misunderstandings.

As Trần’s personality and daily circumstances become more complex and intertwined with everyday small-town America, he is unable to explain his thoughts and experiences to his parents with his dwindling Vietnamese conversational skills. This two-ships-passing-in-the-night familial dynamic is such an immigrant story standard that it has become a given; dare I say a cliché. However, the death and re-birth of identity and language experienced by children of recent immigrants remains a necessity because survival in a New World requires replacing the new with the old. In Trần’s graduation speech, he extols his classmates to claim their precious memories, but let go of useless objects that would only prevent them from moving forward and moving on.

From awkward homemade haircut FOP (Fresh Off the Plane) Vietnamese kid to the punk rock “Phucster!” high school graduate, Trần has lived many lives as each of the 12 chapters attests to. What particularly drew me into his story was the way Trần shaped his life in contrast to the “respectable” or “acceptable” template of an Asian-American model-minority role model that has been hyped by American mass media ever since the 1980’s. The classic anarchist symbol on the book cover that substitutes for the “A” in his last name represents not only the philosophical ethos of anarchy that questions the very nature of social hierarchies, but also reflects the  commonplace understanding of “anarchy” as a force for utter chaos and destruction.

I think for Trần the embrace of, and indeed need for, confrontation in his young life was his way of adopting an identity and a creed that would set him apart from his refugee past but also echo its tumult and violent schism between what he was then and what he must be now. And he knew he had to fight. Fight to get out (of bullying taunts). Fight to get in (with peer groups he respected). What shone through was Trần’s primal will to survive in new and evolving surroundings.

Being a son of the ’80s and ’90s myself, the book title, Sigh, Gone, is such a good hat-tip pun to a grungy aesthetic that it immediately made me smile. Trần’s memoir is definitely a valuable contribution to the growing Southeast Asian refugee memoir genre. With plenty of comic book, Star Wars, and punk rock references along with a rich story arc of a budding bibliophile, the book locates its subject in a certain place in time while also seeing to it that his story will stand the test of time. With all the collective wisdom of an 18-year-old, toward the end of the book Trần ruminates on all he’s endured to get where he finds himself now: in a local truck-stop diner with his then girlfriend. He contemplates the automobile, that quintessential American icon, as a metaphor for life’s trajectory: “The past in a mirror, the future in a window, the present behind the wheel.”