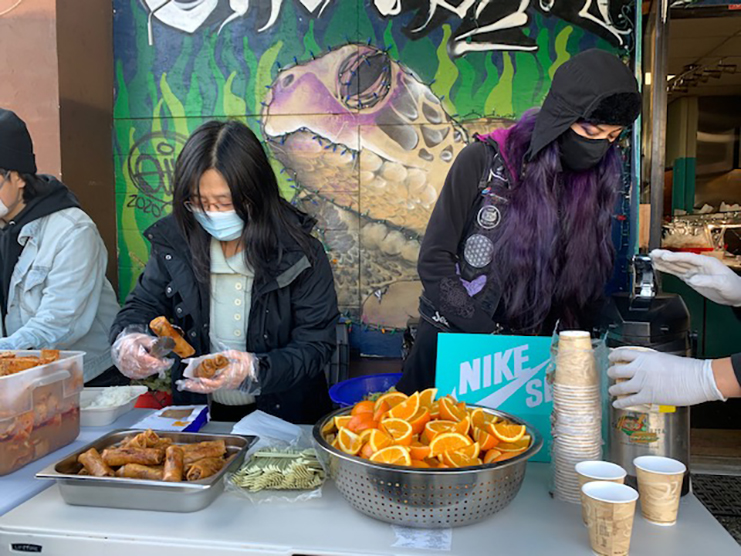 Last January (2021), the International Examiner reported on the Vietnamese vegan restaurant ChuMinh Tofu and the origin of its mutual aid group “the Eggrolls.”

Today, restaurant owner Thanh-Nga “Tanya” Nguyễn continues to lead the Eggrolls every Sunday morning at ChuMinh Tofu in Little Saigon by serving a free, hot meal to anyone who wants one.

“I started three years ago because a lot of people came everyday asking for food,” Tanya said.

With many volunteers asking Tanya if she needed help, the Eggrolls have since grown into a lively community filled with their own values and hopes.

“We’ve been there for each other,” Tanya said, “We help each other in all different ways…I see a lot of love and positive energy that feels so great with the group.”

As a practicing Buddhist, Tanya derives a lot of her values from Buddhist philosophies. Especially when it comes to the Eggrolls, Tanya leads the community with selflessness and a humble mindset.

“It feels like we have a little Sangha,” Tanya said, “It’s so beautiful and peaceful.”

Sangha is a Buddhist term used for a community of people that come together for a certain purpose.

“Everyone is at their best here,” Tanya said, “They’re humble and help each other…it feels like every time I go to the temple.”

Volunteer Johnny Mao says that Tanya has taught him a lot about Buddhism where everyone deserves help and is welcome.

“Tanya really sets an example for us,” Mao said, “Whether it’s showing grace to each other or giving people a second chance, Tanya shows us how to be selfless for the greater good.”

For Portland Mutual Aid Network co-founder and volunteer Greg Bennick, the Eggrolls have taught him lessons that he has brought back to his own community in Portland.

Bennick says that the Eggrolls listen to the people they serve. They aren’t a charity, but rather a mutual aid group, and they hope to expand how they work in the community.

Since its origin, they have grown from their Sunday lunch program into a group that offers clothes, masks and other resources that the community needs. The Eggrolls are especially committed to doing mutual aid work on 12th and Jackson where the restaurant resides.

“There’s a lot of negative media attention in that area,” volunteer Johnny Fikru said. “And what we do at the Eggrolls is counter to the narrative of what’s being depicted in the media.”

Fikru says that he hopes that the Eggrolls will inspire more people to challenge negative media depictions in the CID and other neighborhoods.

New Seattlite and volunteer Wei Mon Lu agrees with Fikru, and says she originally joined the Eggrolls for its mission of breaking down these stereotypes.

“As someone who’s very new to Seattle,” Lu said, “I heard people talking about avoiding 12th and Jackson.”

“It seemed so fear mongering,” she said. “Tanya was one of the first people I met who defied that.”

“A sincere heart and a determined spirit to support Tanya’s vision is all that’s required,” Bennick said.

For people looking to volunteer beyond the Eggrolls or organize their own mutual aid group, Bennick says to just start by thinking about what you could offer. “Just think about where your talents and abilities could serve best, and then ask the people who you might serve, if what you could offer would be helpful.”

This month, ChuMinh Tofu and the Eggrolls are celebrating Lunar New Year. On February 5, the Eggrolls organized a celebration for their Sunday program at which a special meal was cooked, and they also decorated with flowers and other festive visuals and gave out red envelopes.

Tanya enjoys bringing a little happiness during this time of year, and hopes that others can experience their own happy memories.

“Even though the people don’t know what Lunar New Year is,” Tanya said, “They’re also happy too, and I think that’s wonderful.”

For volunteer Chloe Huber, Lunar New Year is a big time for her family, especially with the food that is prepared.

“The food is very special,” Huber said. “It’s this special gift we give each other, like transmitting our hopes for the future and our good health and long life with the food.”

“I really feel that in the meals at ChuMinh,” she said. “It’s this ultimate piece of love and care…the food is hot and prepared for you, and it just feels so good.”

Going into the Year of the Tiger, Tanya is proud of the community and restaurant she’s built.

“For the restaurant, I am very proud that everything is homemade with love,” she said, “I think that’s the special thing…we make everything from scratch and fresh everyday.”

In terms of the Eggrolls, Tanya is proud of their selflessness and willingness to help.

“Sometimes people have limited love where they only help certain people” Tanya said, “In the Eggrolls, I don’t see that, their love goes beyond that with no boundaries.”

Help serve hot meals and supplies on Sunday from 10:30-12:30 pm at ChuMinh or follow @chuminhtofu on Instagram for updates and opportunities to volunteer.

The Eggrolls in action. Photos by Jill Wasberg.
1 of 3