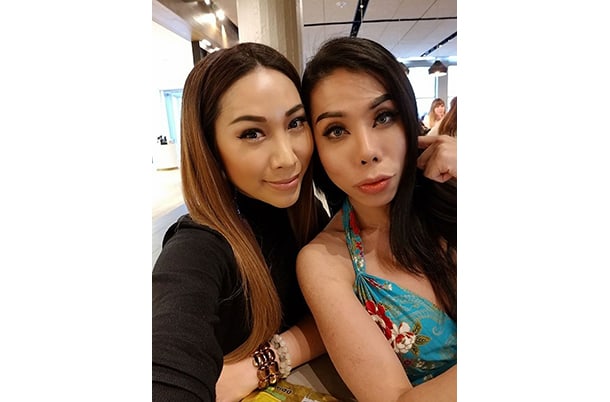 Known as a global destination for sexual reassignment surgery (SRS), Thailand attracts medical tourists seeking inexpensive, high-quality procedures and good hospitality. Dr. Preecha Tiewtranon performed the first procedure in Thailand in 1975, and has since performed over 3,500 procedures. For transgender people in Thailand who don’t have to travel far to consult with its 100 SRS doctors, their awareness of options begins early. Sex hormones are readily available, even for tweens.

The Bangkok Post reported in 2017 that Thai society accepts and recognizes transgender people, including those who do not undergo SRS. While this popularly is attributed to Buddhism’s live-and-let-live attitude, some claim it is due more to Thailand’s culture of tolerance and acceptance.

Transgender people have long been a visible part of Thai media and social life, even before Chaz Bono and Caitlyn Jenner entered the American conversation. The path has been trailblazed by Thai legends like Treecha Marnyaporn (“Nong Poy”), who since 2004, has won transgender beauty pageants at the national and international levels and made a career out of movie roles where she is cast unquestionably as a woman. Transgender men are also becoming more prominent in Thai society.

The International Examiner interviewed Tanya Rachinee and Wora Tippayapaisal about their experiences as Thai transgender immigrants in Seattle. Tanya is the owner of Root Ballard restaurant and came to Seattle at 17 years old. She became Miss API International 2001 at age 19, before winning the Miss UTOPIA (United Territories of Pacific Islanders’ Alliance) title. Wora, who works at Nordstrom, is a transgender advocate, emcee and model who has appeared in magazines, fashion shows and a Lineup video on cut.com.

International Examiner: What do you think about Thailand’s reputation for acceptance of LGBTQ people?

Tanya Rachinee: Acceptable when not your own. For the Chinese immigrant family in Thailand, the oldest son is the pride of the family. As a society, they accept.

Wora Tippayapaisal: I had a regular family until I decided to do the operation. My father stopped talking to me for 10 years. I am the only child… I blamed myself and other people blamed me. But my mom really accepted me. They divorced, and I came to Seattle to see my mom, who gave me the green card. When I see my dad next year in Thailand, it will be the first time in 15 years. Over time, he could accept. The same with my boyfriend’s family. At first they were like my dad, but over time became more positive. My boyfriend is Thai, so more accepting.

TR: Maybe Thais are more accepting because Buddhism has no severe punishment… it’s a grey area. It’s about karma. You be who you are. But in Thailand, once born you cannot legally change your ID or pronouns.

WT: Thailand is very accepting but will not change your ID, U.S. behind in accepting but easy to change paperwork. I remember one time when I was traveling with my Thai passport, the Thai officials were processing it at immigration and shouting about me. It was a terrible public moment and really upset me. Here I can change ID but not in Thailand. When I became 100% American citizen, they changed man to a woman. Bam! … Done. Transgender women used to have a hard time getting jobs outside of sex work or entertainment, but that has been changing in Thai society. Now they can get more mainstream jobs like teacher and doctor. Now there are a lot of doctors in Thailand that are trans.

IE: Tell me about your early experiences in Seattle.

WT: My memories from Thailand are not so good, but when I came here, I started a new world. I was free. More fulfilled. I didn’t know anyone else like me, then I heard of Tanya in the Thai community. Meeting her opened my world about the transgender community.

TR: My parents worked in a Thai restaurant. I mostly hid myself in school … I was androgynous. I took ESL at Franklin High School and my friends were mostly other Asian kids. Then I had an argument with my dad. He said I was an embarrassment. So the next day, I decided to fully dress in my mom’s Thai style dress to march in the 2000 Pride parade.

IE: Wow, just like that. You were brave and defiant! How are you and Dad now?

TR: He lives with me, and that’s him over there. [She points out her dad working in the restaurant kitchen.] After the Pride parade, I talked to my teachers. They let me use the bathroom in their lounge, and the administration allowed me to wear the female uniform. The day before graduation, where a boy and a girl have to walk, the boy refused to walk with me. The girls took my side.

IE: So even that long ago, you had many allies here. It could have been different in another part of the country.

TR: Yes, very lucky to be in Seattle. Very lucky! After high school, I went to the Art Institute to study fashion design. I met Aleksa Manila, who became my drag mother, when I was 17 or 18. I participated in Aleksa’s graduate school experiment, YAMS (Young Asian Men Studies) for queer-identifying men. Pride ASIA  started in 2012 by Aleksa and friends, myself included.

IE: Tell me about the beauty pageants and modeling shoots.

TR:  I’m actually a scaredy cat person but bought my own evening dress and tried the Miss API International pageant in 2001. It was nerve-wracking. I had to speak English, and in front of an audience. After winning, I started to attend functions such as the Court of Seattle, so I got exposed to the general LGBTQ community besides the Asians. Then in 2011, I won Miss UTOPIA.

WT: I got into modeling through a friend at the Art Institute. I didn’t tell people that I was born male. When people accept me, I feel good. In my Lineup for cut.com, people had to guess the sexual orientations of strangers. I appreciated the chance to explain I am straight – I am a transgender woman in a relationship with a man. Also, my boyfriend is not gay. He is a straight man that likes women.

IE: Any last words about being a transgender advocate or giving hope to others?

WT: Transgender women in Thailand now have many sisters, role models, and help on what hormones to take. There are activists who have tried to change the laws about our passports, but it has fallen through. I hope one day it will change.

TR: When I started to transition, I wanted people to think about me as a female. But now I am proud of my trans identity. For others, it’s not my right to out them or tell them what to do. Being myself, nothing stopped me. I feel good, being authentic and I have always worked harder. I hope one day transgender people will be seen everywhere as normal folk who go through a change but are still human. It might not be my lifetime, but one day.